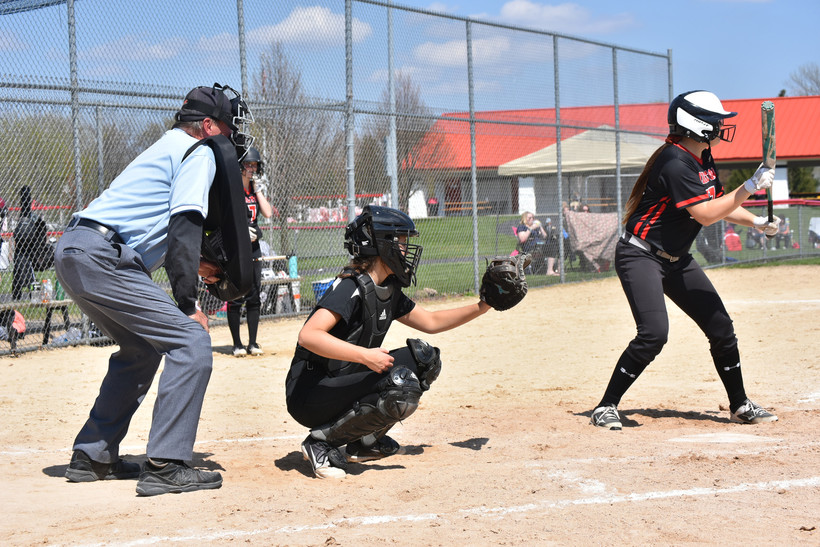 State Rep. Don Vruwink, D-Milton, umpires a May 2019 softball game. Vruwink is cosponsor of a new bill in the Wisconsin Assembly that would make it a criminal misdemeanor to harass or intimidate a sports official. Photo courtesy of Kelley Flury

Bill Would Make It A Criminal Misdemeanor To Harass Or Intimidate An Official
By Megan Hart
Share:

State Rep. Don Vruwink, D-Milton, has experienced that firsthand. He’s been officiating since the 1970s. Referees and umpires face more hostility today than they did when he was starting out behind the plate, he said. Vruwink is co-sponsor of a new bill in the state Assembly that aims to address the problem.

The bill, co-sponsored by Rep. Todd Novak, R-Dodgeville, could make it a criminal misdemeanor to harass or intimidate a sports official in Wisconsin.

Vruwink said the bill's purpose is to help address the national shortage of youth and amateur sports referees, which hasn’t spared the state.

At 67, Vruwink still serves as a softball umpire when no one else is available. At tournaments, he said, he's often one of the younger referees. More officials are over 65 than under 30, according to the bill's sponsorship memo. By protecting referees and umpires from aggressive behavior, Vruwink said he hopes Wisconsin will be able to attract and retain more young referees.

Preserving access to youth sports is important, Vruwink said, because they teach teamwork and discipline.

"If we allow high school sports to die away because we don't have officials, we lose those chances to teach life lessons," he said.

In 2017, the National Association of Sports Officials conducted a survey of more than 17,000 referees from across the country. It found that nearly 50 percent of officials have feared for their safety, while almost 60 percent felt that sportsmanship is on the decline.

Earlier this year, a fight at a youth wrestling tournament in Outagamie County led to viral video and municipal citations for three adults, according to the Appleton Post-Crescent. Around the same time, former Green Bay Packers coach Mike McCarthy apologized for his behavior toward the officiating crew at his stepson’s high school basketball game.

WIAA pushed for the legislation to be drafted, while NASO, the Wisconsin Athletic Directors Association and the Wisconsin Intercollegiate Athletic Conference has also expressed support for it, according to a WIAA news release.

Anderson emphasized that the purpose of the bill isn’t to have parents arrested.

"The last thing anyone really wants to see is somebody to go to jail or going to prison because of their inability to control emotions in a kids' basketball game," he said.

Rather, it will serve as a tool to make the environment more comfortable for referees and umpires at a time when it’s critical to retain them, he said. Anderson said the legislation will not only benefit WIAA's member high schools, but also younger kids who play sports and adults who participate in recreational leagues.

"We're hopeful that this will send a message that people have the backs of officials and that it is okay for new and young officials to venture into the vocation," he said.

The bill is currently seeking co-sponsors before heading to committee. Referees are already protected by law in 24 states.

Utilities Propose Moving Away From Water Withdrawals For Superior Power Plant
People In Wisconsin Are Being Arrested, Charged For Violating Stay-At-Home Order
Control Over Spending Cuts Included In Outline Of GOP’s Response To COVID-19
More Than 1M In Wisconsin Vote By Mail, But Full Election Turnout Still Unclear
Foxconn Officials Say They Have Met Job Goals For 2019
More WPR News