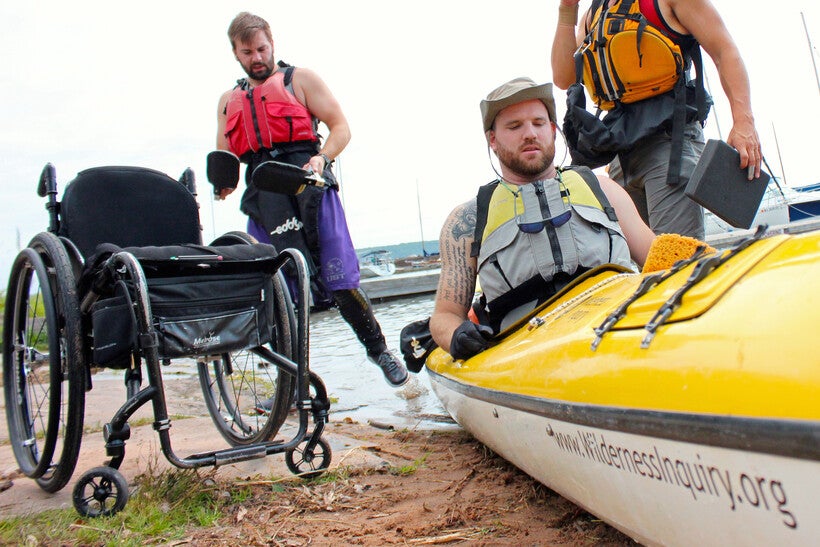 Janet Badura wanted everyone to be able to experience the Apostle Islands National Lakeshore after kayaking the sea caves along the mainland of the Bayfield peninsula years ago. But, getting down to the water was no easy task for the Wauwatosa resident, who relies on a powered wheelchair.

Right now, there are steep stairs with 45 steps leading down a 23-foot sandbank to reach Meyers Beach near Cornucopia.

Speaking on Wisconsin Public Radio's "Simply Superior" on Friday, Badura said Minnesota-based Wilderness Inquiry made it possible for her to explore the Apostle Islands sea caves on Lake Superior. But, Jeff Rennicke hopes Badura and others will soon find it easier to access the water. 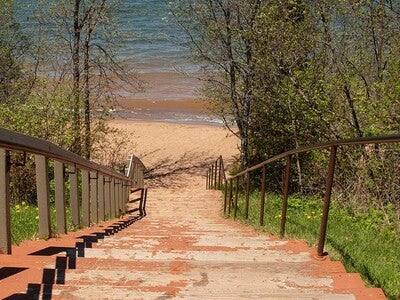 There are 45 steps that span a 23-foot sand bank down to Meyers Beach, making it difficult for people with mobility issues to access the water. The nonprofit group Friends of the Apostle Islands is hoping to raise enough funds to install a ramp for people living with disabilities.
Photo courtesy of Jeff Rennicke

The nonprofit group Friends of the Apostle Islands plans to raise $325,000 by the end of next year to build a roughly 500-foot ramp that slopes gradually down to Meyers Beach. The National Park Service is expected to match that amount to fund construction of the project, which could begin as early as 2024.

"In many cases, national parks are examples of some of the wildest, roughest most far out there landscapes that this nation has to offer, and so it is no simple thing to make these areas accessible," said Rennicke, the group’s executive director.

Rennicke said the same is true for the rugged beauty of the national lakeshore with its 21 islands and honeycomb cliffs that can draw as many as 500 paddlers and beachgoers on a summer weekend. The nonprofit organization has been working with the National Park Service to strike a balance between federal laws that seek to preserve the park’s wilderness and improve access for people living with disabilities.

Rennicke noted 80 percent of the park is designated as wilderness under the Wilderness Act of 1964, which generally bars construction of roads and other structures. The Friends group has been focusing on improving accessibility along the mainland at Meyers Beach and Little Sand Bay because they lie outside those designated areas. 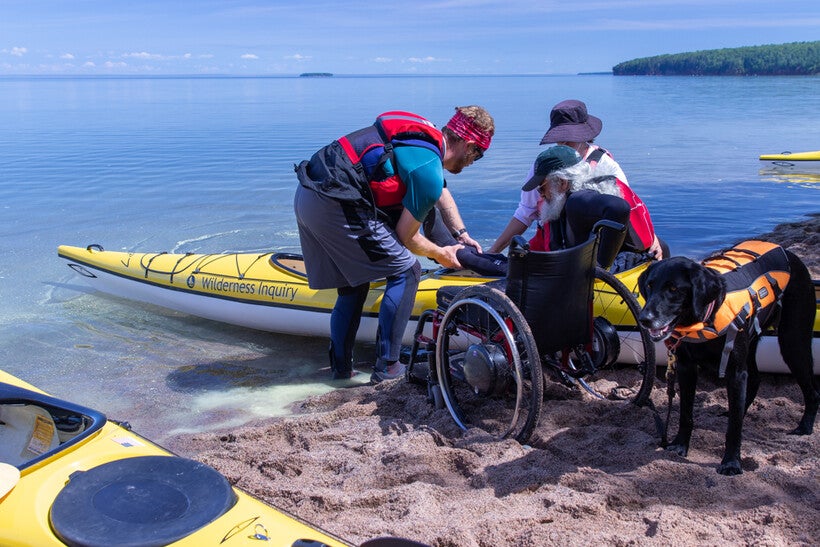 The proposed ramp is the organization’s key priority as part of its "Access for All" initiative that seeks to raise awareness and funding to break down barriers for those visiting the park. According to the U.S. Centers for Disease Control and Prevention, around one in four adults nationwide, or roughly 61 million people, live with a disability.

With more than 200,000 visitors each year, Rennicke said statistically as many as 40,000 people could find it difficult to fully enjoy the park. Since 2008, the National Park Service has partnered with the Friends group and others to increase access.

Between 2008 and 2014, the park installed more than a dozen restrooms designed to meet standards under the Americans with Disabilities Act on Basswood and other islands. Boardwalks and accessible campsites have also been built at Sand and Stockton islands. A spokesperson for the Apostle Islands National Lakeshore said the park is also in the middle of building an accessible boardwalk to the Sand Island light station, which will provide access to a lighthouse for the first time within the park.

Beyond addressing mobility issues, the park has added audio devices at its visitors center and interpretative displays at Michigan Island and Little Sand Bay. For those who are blind or vision-impaired, the park offers a Junior Ranger booklet and brochure with maps in braille.

Connecting people of all abilities and backgrounds to the outdoors has been the mission of Wilderness Inquiry for decades. The Minnesota nonprofit has been running kayak trips in the Apostle Islands for people with mobility issues for the last 10 years, according to Executive Director Erika Rivers. The group brings around 500 people from across the country out to the park each year, and Rivers said around 40 percent experience a variety of disabilities. 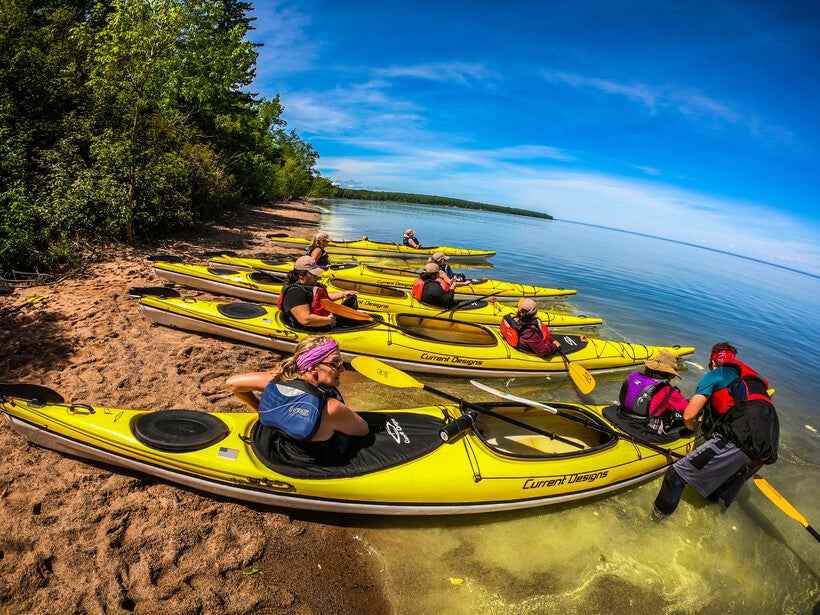 "The kinds of disabilities that we see on the kayak trips at the Apostle Islands include folks who are using oxygen from something like COPD, or somebody who uses a wheelchair or other mobility aids to navigate the world," Rivers said.

During trips, Rivers said they frequently carry individuals with disabilities from the parking lot at Meyers Beach down to the water. Wilderness Inquiry is working with the park and Friends group to support the installation of a ramp there.

"One of our core aspects of how we work with individuals experiencing disabilities is first and foremost to preserve dignity," Rivers said. "So, this will allow a much greater level of comfort and dignity in the process of bringing people onto the Great Lake." 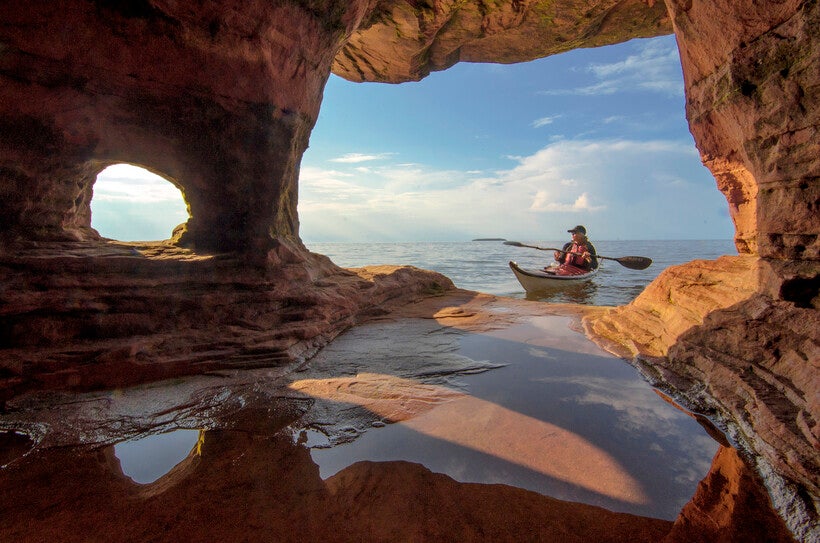 A kayaker exploring the Apostle Island sea caves. The nonprofit group Friends of the Apostle Islands is raising money to install a ramp that would enhance accessibility at Meyers Beach for visitors who live with mobility issues.
Photo courtesy of Jeff Rennicke

Research has shown that time spent in the outdoors promotes health and wellness, which Rivers said underscores the importance of ensuring equitable access to those opportunities.

Three decades after the passage of the Americans with Disabilities Act, Badura said accessibility concerns are still prevalent for people with impaired mobility. She said efforts to eliminate those barriers within the park are overdue. Even so, she’s grateful for all the work that’s been done by the park, Friends group and Wilderness Inquiry.

"I'm very appreciative ... that there is more and more, you know, an awareness that things need to be made accessible for all people as best they can be," she said.