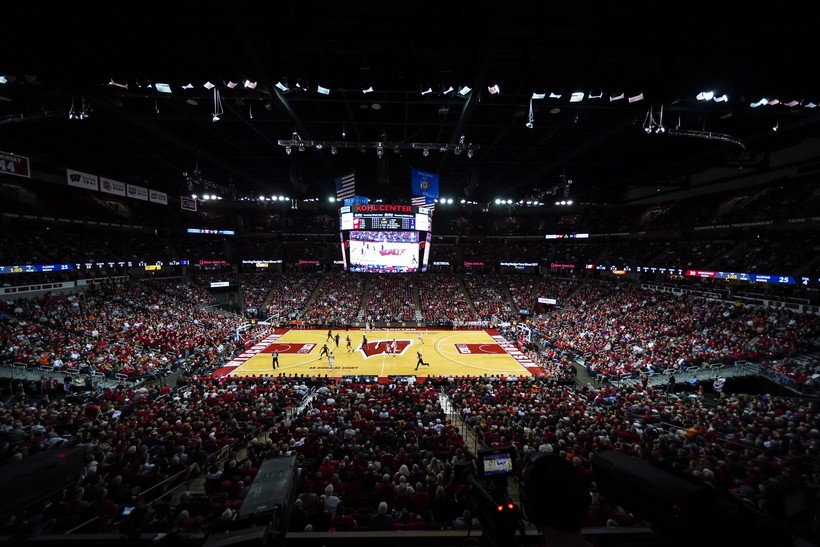 Wisconsin plays against Illinois during the first half of an NCAA college basketball game Wednesday, Jan. 8, 2020, at the Kohl Center in Madison, Wis. Andy Manis/AP Photo

There’s been speculation for weeks on how the spread of COVID-19 might affect American sports. A clearer picture has come into view in the last 48 hours. From pee wee to the pros, the new coronavirus has touched Wisconsin sports at every level.

The Wisconsin Interscholastic Athletic Association’s (WIAA) girls' basketball tournament tipped off Thursday in Green Bay. Officials announced Thursday morning that attendance would be restricted to 88 tickets per game, or four tickets per player, for each team. That came after the Wisconsin Department of Health Services (DHS) recommended canceling events of over 250 people to help slow the spread of the virus.

Dave Anderson, executive director of the WIAA, said Thursday morning that the organization regrets the abruptness with which it changed its attendance policy for the girls’ tournament. Anderson said the situation is fluid and WIAA is evaluating its policies in real time.

"I will tell you that the overwhelming majority of the communications that we've received have been empathetic and understanding, and we're grateful for that," he said.

The Kohl Center in Madison was set to host the boys' state basketball tournament March 19-21, but announced Thursday afternoon it wouldn't be available. The decision was made after the university consulted with public health officials, a representative said.

Todd Clark, WIAA's director of communication, later said WIAA's board would host a special meeting to discuss options for continuing the boys' and girls' tournaments.

Anderson said the WIAA is doing everything it can to make athletic opportunities available for children without contributing to the spread of the new coronavirus in Wisconsin.

At the college level, the Big Ten announced Thursday afternoon it would take even more drastic steps. The conference has canceled all conference and non-conference athletic competitions through the end of the academic year, including spring sports that finish after the school year has ended. It's also placed a moratorium on all recruiting activities.

"The safety and well-being of our student-athletes, staff and fans is our highest priority," University of Wisconsin-Madison athletic director Barry Alvarez said in a statement. "We fully support the Big Ten Conference’s move to cancel conference-related sports events and activities for the remainder of the school year."

Top-seeded Wisconsin was set to play its first game in the Big Ten men's basketball tournament Friday, but the tournament was canceled Thursday morning. Conference commissioner Kevin Warren said it was the right thing to do. Some UW-Madison students said they were disappointed after the cancelation was announced.

Riley O'Connell is a sophomore studying finance. As a former athlete, she said she felt bad for the players who trained all year to have their season cut short.

"I know how important these tournaments are and how exciting they are, so I just feel bad," she said.

The Badgers were supposed to host a first-round NCAA tournament game in women's hockey on Saturday. The NCAA announced Thursday all of its spring and winter championships have been canceled, including March Madness.

As has been widely reported, the NBA suspended its season Wednesday night after a player on the Utah Jazz tested positive for the virus. The Milwaukee Bucks were scheduled to host the Boston Celtics Thursday. That game is now postponed indefinitely. Players from the Celtics, who faced the Jazz on March 6, are currently under self-quarantine.

Major League Baseball has suspended spring training. The Milwaukee Brewers were scheduled to host opening weekend against the Chicago Cubs beginning March 26. The league said the regular season will be delayed by at least two weeks.