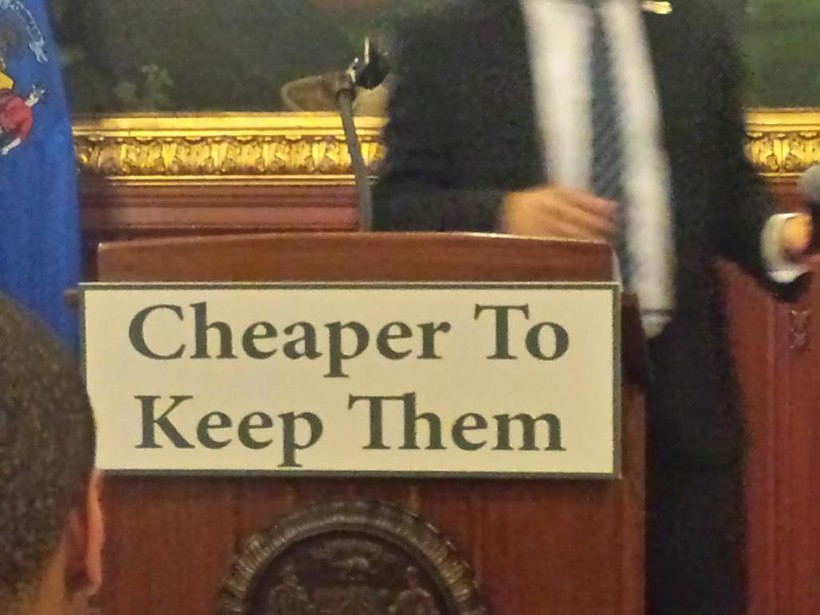 A podium sign echoing the governor's argument that keeping the Bucks in Wisconsin will be financially prudent in the long run.

Even With Leaders In Agreement, Support Among Rank And File Lawmakers Unclear
By Shawn Johnson
Share:

While Gov. Scott Walker and other state and local leaders are now united behind a Milwaukee Bucks arena plan, they'll have their work cut out for them getting the votes for it in the state Legislature.

Walker framed this latest deal in terms of what the state would lose if the Bucks leave Wisconsin, saying it was cheaper to keep them. But speaking to reporters right after the governor's press conference, Greenville Republican Rep. David Murphy said the deal needed more vetting and that he was "not a believer in government supporting arenas for millionaire players and billionaire owners."

"Every dollar that's not spent on the Bucks is a dollar that's in somebody's pocket that can be spent on something else also," Murphy said. "You know, the Milwaukee Bucks are not the only way in which the economy can be stimulated."

Murphy called for the Bucks deal taken out of the budget. Milwaukee Democrat Rep. Mandela Barnes, who supports the deal, said that putting it up for a vote on its own would make it a lot harder to pass.

While Republican legislative leaders are on board with this deal, neither could say Thursday whether they have the votes to pass it.