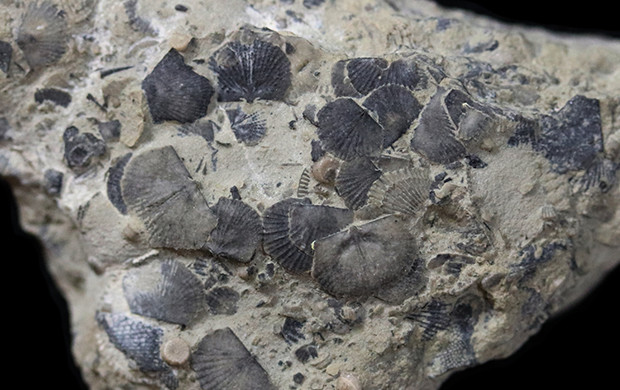 These fossils of brachiopods, mostly Striatochonetes, were found in the Milwaukee Formation. Photo courtesy of Ken Gass.

Milwaukee County was once home to predators, scavengers and grazers, spiny sharks and the Eastmanosteus pustulosus, which could get up to 16 feet long.

Of course, that was millions of years ago.

Now fossilized as part of the Milwaukee Formation in northeastern Milwaukee County, these relics of invertebrates, fish and terrestrials are preserved in one of the most diverse formations in the United States from the Middle Devonian Epoch — some 385 million to 398 million years ago.

Four scientists, and three with ties to Milwaukee, wanted to catalog evidence accumulated over decades and mobilize scientists to study what potentially are new species found buried in sediment with a new book, "Fossils of the Milwaukee Formation: A Diverse Middle Devonian Biota From Wisconsin, USA."

The 224-page book has more photographs and illustrations than words, said Kenneth Gass, one of the authors of the book and a content contributor to the Paleontology Portal and Paleobiology Database. The visuals help make it appealing to educators and casual collectors alike.

The calyx (head) of the crinoid, Melocrinites, found in the Milwaukee Formation. Photo courtesy of Ken Gass

Plants and animals that lived in the region are explored in this book — the only one of its kind to detail the formation in more than a century — such as Earth’s first trees, the cladoxylopsids, and fungi that could grow as high as a two-story building.

The Milwaukee Formation has preserved its fossils in a variety of ways, and that makes these stratified rocks particularly interesting.

Formations are areas defined by age and geographic region, and the strata there need to be mostly uniform in both physical characteristics and fossil content to earn the title of a formation. Milwaukee’s formation was deposited in the sea in what’s now part of Milwaukee County, about 385 million years ago, Gass said.

"The formation was formed by the precipitation of land-derived clays and other sediments from runoff as well as crystals of calcite that formed in the sea water," he said.

Fossils can be created in several different ways, but they all involve some type of burial, generally in sediment under the water.

"It’s got to be buried to be preserved," Gass said.

Fossils can be preserved in glacial ice, some turn into rocks, some go through a process of permineralization — where minerals are added to the bone material or other hard parts — and others are dissolved away to reveal a mold of whatever was once there. In most cases, it’s the hard parts that remain, Gass said. Sometimes softer materials, such as plant and trace fossils, get preserved, which is the case in the Milwaukee Formation.

All kinds of information about environments and evolution can be found within a fossil, said Donald Mikulic, curator at the Weis Earth Science Museum in Menasha, retired as a senior paleontologist at the University of Illinois and Urbana-Champaign and another author of the book.

And people needed that evidence.

For the most part in the 1800s, the thought of animals going extinct was was a radical idea, Mikulic said. People didn't believe the earth changed much, if at all. Finding fossils provided the evidence that things have actually changed quite a bit.

Mikulic said the book explores the different types of fossils found in the Milwaukee Formation. But it also reveals the economic drivers that exposed the fossils in the first place. This illustration, made by the Milwaukee Lithography & Engraving Company, is based on a photograph and shows quarrying at the Milwaukee Cement Quarry in 1876. Photo courtesy of Donald Mikulic

In the 1800s, most people still used stone to build large structures, but cement was becoming an alternative option. Milwaukee happened to have the right combinations of clay and limestone to make natural cement and gave rise to the Milwaukee Cement Co.

"It became a leader in the United States — one of the biggest producers and most modern producers at the time of making natural cement," Mikulic said.

In fact, the Milwaukee Cement Co. became a showcase, and drew an audience curious about how cement was made. As the materials were extracted from Milwaukee quarries, so too were the fossils.

But Gass said quarry workers were offered money to preserve the fossils.

"They would actually get paid more doing that than they would on their actual job of working in the quarry," he said. 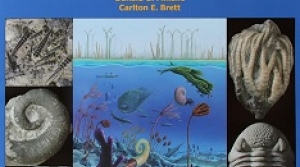 Fossils are illustrations of important biological events. We talk with two experts about the Milwaukee Formation during the Devonian Period, rich with around 250 species of organisms, from fish to the world's first trees and fungi that reached the height of a two-story building.