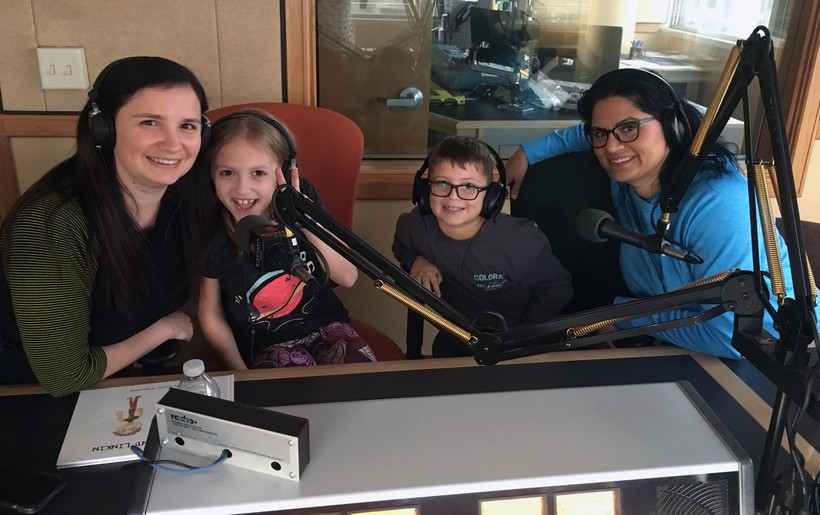 Naudia Greenawalt, second from left, with her mother, Dolores, left, and Linkin Eger, second from right, with his mother, Kelly, right, in WPR's Milwaukee studios.

He has brown hair and glasses. His favorite color is red.

He also happens to have brain cancer, and he's been battling it off-and-on since he was 2 years old.

"It’s like, it hurts, and it’s sick," Linkin recently said of his treatments. "I get headaches and tummy aches."

Linkin’s friend, Naudia Greenawalt, is 8. They met years ago at school, and used to take taekwondo classes together.

Last year, Naudia decided she wanted to help Linkin and raise money for his medical bills.

Some 8-year-olds would run a lemonade stand to raise money, or sell cookies. Naudia wrote a book.

"My Friend Linkin" starts at the beginning, when Linkin was first diagnosed with cancer. It’s told in a narrative form, from Naudia’s perspective, and was first published in November.

Linkin had surgery to remove most of it, except for a section that was wrapped around an artery.

But last December, five years after the surgery, the cancer came back. Linkin is now undergoing a year of chemotherapy treatment, which the book addresses matter-of-factly.

"He doesn’t like chemo," Naudia writes. "But it’s saving his life right now."

Before writing the book this summer, Naudia went with Linkin to a few treatments at Children's Hospital of Wisconsin in Milwaukee.

"My Friend Linkin" takes the reader through a typical day of chemotherapy treatment, from a kid's perspective. There are photographs of Linkin’s medicine hidden in applesauce. Goofy selfies of Linkin and his family in the hospital. "My Friend Linkin" was published in November. Gretchen Brown/WPR

The book explains chemotherapy is important because it kills cancer cells. Linkin has an appointment every single Monday, but sometimes, it can make Linkin sick.

"When I’m not feeling good, I just hang out and chill," Linkin said.

On better days, Linkin and Naudia play tag and hide and seek. They’re goofy, and tease each other, make up songs and dance around.

Naudia drew the cover art, too: a little boy with round glasses and spiky brown hair, smiling next to a little girl with blonde hair and bright pink pants.

Naudia is adamant that writing this book doesn’t mean she’ll be an author again some day.

Linkin wants to be a scientist someday, making bubblegum chemo so you don't have to take shots. But for now, he said, being the subject of a book is pretty cool.

He said kids who are being treated for cancer like he is shouldn’t be scared of the hospital.

"They should always believe that they would be OK," she said.