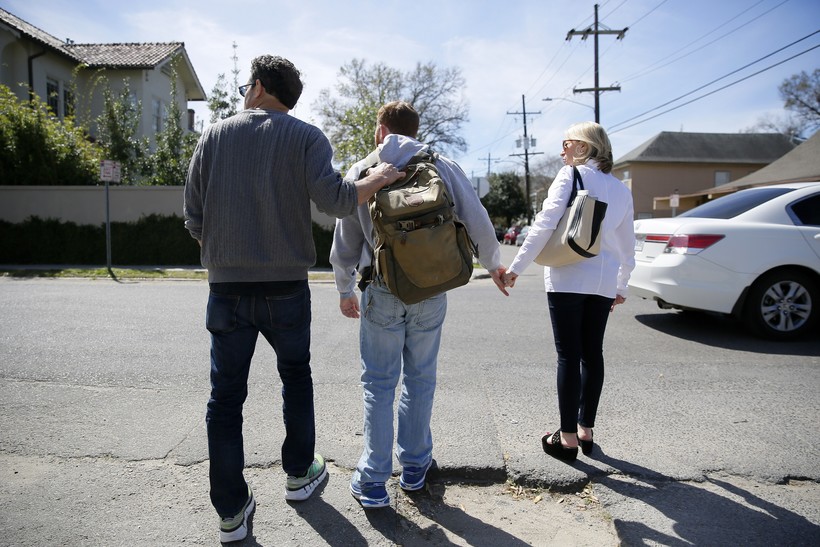 In this Wednesday, March 2, 2016 photo, Sam Alexander and Ellen Schneider help their son, Ben, cross a street on their way to lunch in New Orleans. When Alexander was about 2 1/2 he was diagnosed with autism.

Parents who raise children on the autism spectrum face unique challenges — not only as parents, but as partners. Research shows they’re at a higher risk of divorce and report lower satisfaction with their marriages than other parent couples.

New research from the University of Wisconsin-Madison’s Waisman Center may help explain why: the challenges these families face can change the parents' relationship — but not in the ways we might think.

The study was led by Sigan Hartley, associate professor of human development and family studies at UW-Madison. She and fellow researchers worked with two groups: one consisting of 174 couples raising a child with autism spectrum disorder, and another including 179 couples with neurotypical children, or kids not on the autism spectrum.

They asked each couple to keep a daily diary for two weeks about how they interacted with each other. They reported how much time they spent together, described each interaction as positive or negative, and characterized whether the interactions made them feel close to, or supported by, their partners.

She said this finding suggests raising a child becomes even more time-consuming than usual when that child is on the autism spectrum.

"In addition, to all the traditional parenting things that any parent has, it often may mean more time spent in child-related activities, whether that's helping your child with activities like dressing, eating or participating in therapies, or working with a special education teacher," Hartley said.

But the study also found something more. The kind of interactions couples had changed as the amount of time they had together decreased.

Hartley said both groups of parents in the study reported they felt supported by their partners as they, "put out the flames of everyday problems. Who's going to make dinner? Who's going to put John to bed? Who's going to drive Tiffany to piano? How are we going to pack the backpacks for tomorrow's school?" Hartley said. "Both groups were feeling like they actually were coming together to assist each other to put out these everyday flames."

But the parents who had less time together as a couple, she said, reported fewer positive interactions with their partners — fewer moments together where they were, "taking the time to connect with your partner, to share a story," Hartley said.

"How did that morning go for you at work? How are you feeling about the current political climate? What are you excited about with March Madness, or how is your bracket doing? These are things we know are actually so important to developing that intimacy with your partner and maintaining that relationship, not just that working relationship to solve child issues, but to actually have that connection."

Notably, the couples with autistic children in the study didn't report a higher number of negative interactions even when they had fewer positive ones.

"They weren't fighting more than our comparison group," Hartley said. "But what we know from the general literature is that people in long-lasting and satisfying relationships, not only do you have to have few negatives, but you actually need to have a lot of positive interactions.That actually is a very key part of this recipe to maintaining a really satisfying and happy couple relationship."

Hartley said the study's insights into parents navigating the world of autism and how they interact may help these couples address the unique challenges they encounter, and that can have a positive effect on the kids they're raising.

"What we know and what we've known for a long time is that we need to understand the context in which people grow up," she said. "If your goal is to support the best development and outcomes for a child with autism, we absolutely need interventions that focus directly on that child."

It's also important to focus on how family members are doing. If the parents are doing well, it makes them be warmer, more attentive parents, Hartley said.

"If you're so drained because you are not getting your needs met, it's really hard to do all these extra tasks that we put on parents with a child on the spectrum," she said. "I always think these outcomes are tightly linked."

The research is featured in this month's Journal of Autism and Developmental Disorders.