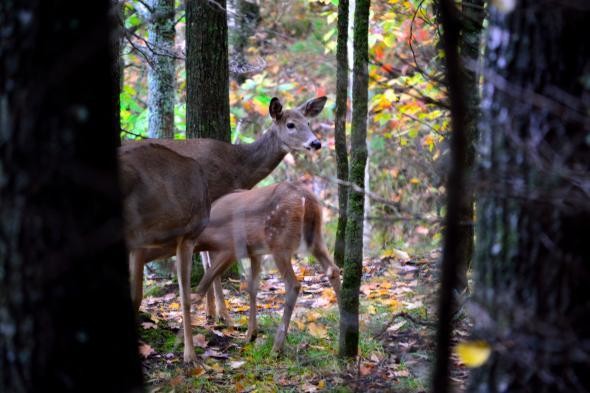 The Natural Resources Board voted Thursday to make changes to antlerless deer quotas in four northern Wisconsin counties as part of a special board meeting. The meeting was held to reconsider the board's vote last month after allegations it violated open meetings laws.

The board voted 5 to 2 on June 24 to reduce antlerless quotas or public land permits in 11 northern Wisconsin counties. The decision brought down the number of deer that can be harvested by about 4,600 across the 11 counties.

On Thursday, the board voted 6 to 1 to revert to quota recommendations that were put forth by the Wisconsin Department of Natural Resources for Douglas, Bayfield, Burnett and Sawyer counties. The board's previous decision on the remaining seven counties will stand.

The June 24 vote upset many of the northern County Deer Advisory Council (CDAC) chairs, while several supported the change.

Al Horvath, chair of the Douglas County CDAC, said the group worked out a compromise on the deer harvest while being mindful of public input.

"I was shocked to learn that the hard work and dedication of the Douglas County council was ignored when the Natural Resources Board set their antlerless quota," said Horvath.

Bayfield County CDAC Chair Kevin Schanning said they based their quotas on a variety of factors, including deer data and the makeup of land in the county. The county is heavily forested, and timber sales are an important source of revenue there.

"We are strongly opposed to vague generalizations and individual opinions overriding the scientific deer metrics and the public opinion that we base our decisions on," he said.

However, others felt the board acted professionally in making its decision, including Marathon County CDAC member Mike Brust. Brust urged the committee to consider hunter interests to grow the deer herd, which he said are often ignored.

"Not all CDAC members oppose the action by the board. The reality is that many CDACs are strongly influenced by or controlled by interests that would like to see fewer deer on the landscape, often including a DNR representative. Representing hunters' interests are sometimes in the minority despite overwhelming public testimony in many cases to restore the deer herd in their county."

Tony Blattler, vice chair for the Wisconsin Conservation Congress, reiterated the group's support for the recommendations that were set by the CDAC chairs. He acknowledged that the councils serve in an advisory capacity to the board, but he feared the public may lose faith in CDACs if they feel their voices aren't being heard.

Board members said in June that a slight reduction in tags is necessary to address a declining deer population up north and prevent harvesting too many deer on public lands.

Greg Kazmierski, the board's vice chair, was the sole board member to oppose any changes to that decision. He reiterated that the recommendations he put forward in June regarding the 11 counties were based on deer population trends and overwhelming public input to grow the deer herd.

"This year we had the most participation ever in those CDACs, and what we are doing right now is thumbing our nose to those CDACs and those people that have participated in the process," said Kazmierski. "There is nothing wrong with the process. It's just we need to all be following the process."

Board member Terry Hilgenberg said he was disappointed with accusations and personal attacks against board members, expressing concern about the decline of the deer herd in northern Wisconsin.

"We had an abundance of deer in Vilas County that has diminished greatly in the last 20 years," said Hilgenberg. "In my last five years of hunting in Florence County on both private lands and in the (Chequamegon-Nicolet National Forest), it's the same experience. I've personally observed the negative impact that this has had on the northern economy."

Fred Prehn, the board's chairman, said there needs to be a larger conversation to define what the deer herd should look like in Wisconsin.

This month, three former board members wrote a letter to the board and filed a complaint against the body for its vote in June. They alleged four board members shared that plan to reduce quotas in those counties among themselves in a walking quorum, which would be a violation of the state's open meetings laws.

At the beginning of the meeting, Prehn said that the board has been grappling with sharing information with the public and board members as a result of working remotely due to the COVID-19 pandemic.

"Historically, this board has operated in a transparent manner, and we are committed to maintaining that fact in the interest of transparency," said Prehn.

Dave Clausen is among former board members who submitted the complaint. He said he's pleased with the changes that the board made.

"I still think that they should have reversed their actions completely because I think what the other CDACs had to say and how they voted, it still shows a certain amount of lack of respect for the process," said Clausen.

The complaint has been filed with Dane County for review. Officials may be subject to a fine of up to $300 per violation. State law allows a court to void any action taken in violation of the state's open meetings law.