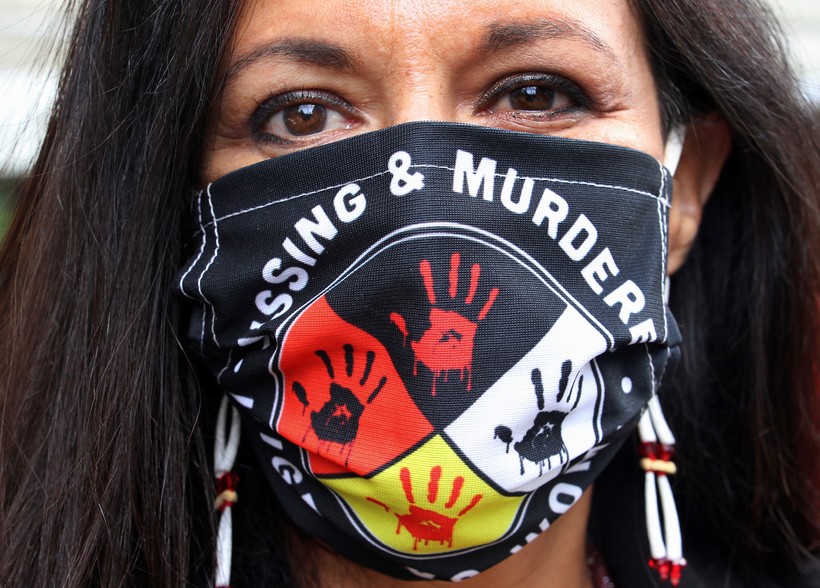 In this Aug. 26, 2020, file photo, Jeannie Hovland, the deputy assistant secretary for Native American Affairs for the U.S. Department of Health and Human Services, poses with a Missing and Murdered Indigenous Women mask, in Anchorage, Alaska, while attending the opening of a Lady Justice Task Force cold case office in Anchorage, which will investigate missing and murdered Indigenous women. From the nation’s capitol to Indigenous communities across the American Southwest, top government officials, family members and advocates are gathering Wednesday, May 5, 2021, as part of a call to action to address the ongoing problem of violence against Indigenous women and children. Mark Thiessen/AP Photo

Biden's order seeks federal strategy to prevent and respond to violence against Native Americans within 240 days
By Danielle Kaeding
Share:

Biden’s order directs U.S. Attorney General Merrick Garland and Interior Secretary Deb Haaland to develop a federal strategy to prevent and respond to violence against Native Americans, including the epidemic of missing and murdered Indigenous people, within 240 days.

Justine Rufus, co-chair of the state’s task force on Missing and Murdered Indigenous Women, said action to address the issue is long overdue because awareness of the crisis has been lacking in the past. Rufus said Biden’s order is a significant step that she hopes will result in meaningful actions that make a difference in tribal communities.

"I think outcome is really important to our communities to ensure that we are safe and have the support of law enforcement and also access to the resources and to the databases that are necessary to protect our communities," said Rufus, a member of the Bad River tribe.

More than four in five Indigenous women have experienced violence in their lifetime, and American Indian and Alaska Native women are murdered at a rate three times higher than white women. Attorney General Josh Kaul formed a task force last year to investigate issues that play a role in the disappearance or murder of Indigenous women in Wisconsin.

In Wisconsin, 22-year-old Katelyn Kelley was reported missing from the Menominee tribe’s reservation last June and her remains were discovered earlier this year. And a Nebraska man has been charged with the murder of Kozee Decorah. The 22-year-old Ho-Chunk woman and Wittenberg native was found burning in an outhouse on a Nebraska reservation.

"It’s really important to center the voices of the family in this work," said Rufus. "And sometimes, I think that gets lost ... that there’s real life tragedies that are happening as we're doing this work."

Biden’s directive also seeks to improve data collection and information-sharing across agencies. Wisconsin’s attorney general said that’s critical as the state lacks accurate data on the number of missing and murdered Indigenous women and girls in the state, noting the agency recently hired an individual to work on data collection.

"By having federal resources potentially supporting what we're doing at the state level, that's going to help us collect data more comprehensively, and hopefully get a better understanding of what the data shows," said Kaul.

The number of missing and murdered Indigenous women is difficult to gauge due to underreporting and insufficient data collection. A report released in October by the U.S. Government Accountability Office highlighted not all tribes have access to the federal database. Rufus noted Wisconsin tribes rely on county partners to enter data on their behalf.

Rufus said she's pleased the executive order sets strict deadlines for agencies to evaluate gaps in data collection and services. Federal agencies have also been instructed to review whether changes are needed in awarding federal grants. Rufus said that could bring more support to tribes as they confront a lack of resources and funding around the issue.

"When you have a smaller workforce or staff shortages, it becomes overwhelming," said Bill. "The workload tends to spill over and ... it creates delays in what can be done, how it can be done."

Under Biden’s order, federal agencies will be tasked with supporting tribal efforts to prevent and respond to violence, as well as strengthening prevention efforts and services for survivors and victims. The directive also instructs agencies to coordinate efforts to end human trafficking, build on training for federal agents and prosecutors, and strengthen participation in the Amber Alert in Indian Country initiative.

As federal agencies evaluate gaps, the state’s task force is continuing work to develop a report with recommendations to address issues set to be released sometime next year. Rufus said the task force may request an extension as work has slowed during the COVID-19 pandemic.