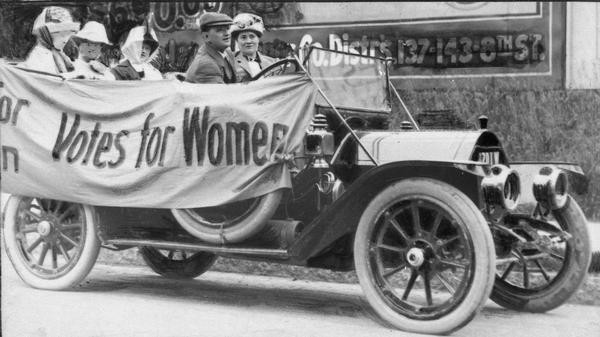 Members of the Political Equality League in an early Ford automobile draped with bunting reading "Votes for Women" on an unknown date in Milwaukee, Wisconsin. In the front seat is Mrs. B.C. Gudden. In the back seat, left to right, are Ruth Fitch, Bertha Pratt King, and Helen Mann.

The bill stated "women shall have the same rights and privileges under the law as men in the exercise of suffrage, freedom of contract, choice of residence for voting purposes, jury service, holding office, holding and conveying property, care and custody of children and in all other respects."

It was signed into law by Gov. John James Blaine a few weeks later.

Despite this landmark, Wisconsin’s record in women’s rights was mixed.

The state’s first constitution, drafted in 1846, granted married women property rights. The constitutional convention also discussed giving women the right to vote, though that provision didn’t make it into the final draft. The proposed constitution proved too radical, however. Some opponents argued giving women these rights would sow dissension between husbands and wives, and upend the natural order of the family.

One defender of the provision, who wrote under the name "Agricola," argued allowing a woman to control her own inherited or earned property would improve her situation and prospects should her marriage turn to "want, misery, and destitution." In the end, a new constitution was prepared and adopted that excluded any mention of women’s property rights.

Wisconsin women gained the right to run in school board elections in 1869, though they couldn’t vote in them until 1884.

Suffragists continued to push for wider voting rights. Wisconsin’s leaders in the movement worked primarily through women’s clubs to promote women’s rights. In 1912, suffragists successfully pushed for a statewide referendum on suffrage but they were roundly defeated. Men voted against giving women the vote by a 63 percent majority.

Even with this defeat, Wisconsin’s well-organized campaign brought several of the state’s women to national prominence, including Carrie Chapman Catt, Theodora Winton Youmans, Olympia Brown, and Ada James. And in 1919, Wisconsin became the first state to ratify the 19th Amendment granting national suffrage to women, beating out Illinois by a few hours.

Many of the women who worked for suffrage turned their attention to voter education. Catt founded the League of Women Voters in 1920.

Wisconsin’s 1921 equal rights law was left purposely broad. Its sponsors called it a "blanket measure," granting women the same rights and privileges as men except for "the special protection and privileges which they now enjoy for the general welfare."

Soon after, Mabel Putman, Wisconsin chair of the National Woman’s Party, led the movement in support of the equal rights law. It was not without its critics, however. Assemblyman Alexander Matheson contended the bill threatened the home, declaring "this bill will result in coarsening the fiber of woman — it takes her out of her proper sphere." The bill won the support of the state’s Progressives that carried it through the Legislature.

With its passage, Putman received letters of congratulations from Sen. Robert La Follette and Alice Paul, leader of the National Woman’s Party.

"This makes Wisconsin the only spot in the United States where women have, or ever have had since the beginning of our country, full equality with men," Paul wrote. "We are very grateful to you for what have you done, and are very proud of you."

But the broadness of the equal rights law also contributed to its ineffectiveness, leaving it open to court and local interpretation. The inclusion of the line about women’s special protection and privileges later led Paul and other leaders to denounce the law as its interpretation often led to courts to deny women rights.