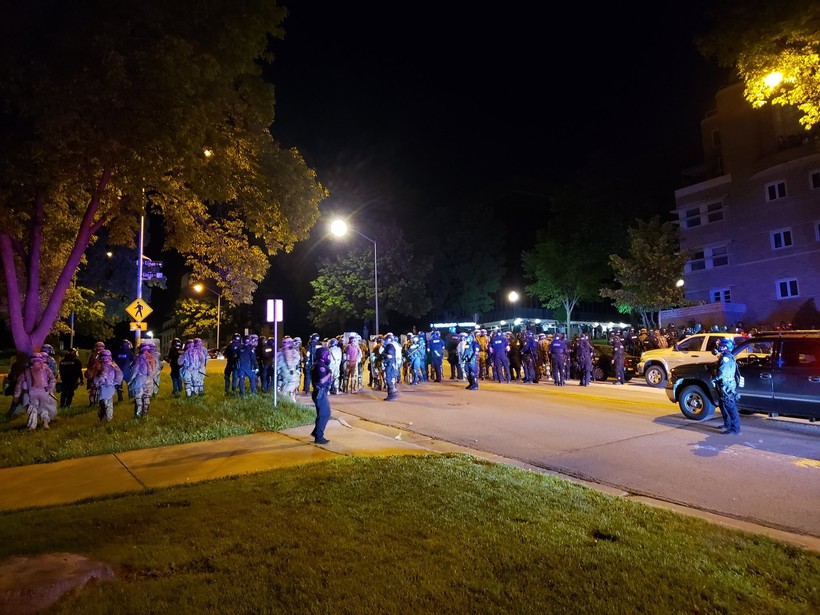 Madison police and Wisconsin National Guard troops respond to protests in Madison on May 31, 2020. On June 9, Gov. Tony Evers said the National Guard had concluded its mission around the state protests. Shawn Johnson/WPR

National Guard's Role In Responding To Protests Is Over, Governor Says

In an interview with WPR on Monday, Evers said that going forward the National Guard's role at the protests "clearly will be diminished."

In a statement on Tuesday afternoon, he said the Guard's mission to protect public safety and the rights of protesters and the media was over.

"Their role always has been not to run around cities and arrest people; it's about protecting important infrastructure" such as the state Capitol or public utilities, Evers told WPR.

Evers activated the troops in response to protests in Milwaukee, Madison and other cities that at times turned violent or involved widespread vandalism and looting. Most protests were peaceful and even the largest protests in recent days haven't turned violent.

A nationwide wave of street demonstrations broke out following the alleged murder of George Floyd by Minneapolis police, with daily events in the state's largest cities and other protests reaching even rural areas.

The state mobilized nearly 1,500 troops in the last week in response to requests from local communities, Evers said.

"This is a watershed moment for our nation, one that requires everyone being willing to come together," Evers said in Tuesday's statement. "I am encouraged by the peaceful protesters who continue to make their voices heard and demand change, and I am grateful for the citizen soldiers of the Wisconsin National Guard whose important mission helped keep our communities safe."

In the interview with WPR, Evers said he mobilized the troops at the request of local governments "under certain provisions, and one of them was to make sure that their role is to allow First Amendment rights to be available to people like they should be."

Other troops mobilized in Madison, Green Bay, Kenosha and Racine. The last troops on duty supported Madison authorities on Monday before concluding their mission.

There are about 10,000 soldiers and airmen in the Wisconsin National Guard. More than 1,200 remain mobilized in response to the COVID-19 pandemic, for example staffing community testing events throughout the state. More than 500 additional troops are deployed overseas.