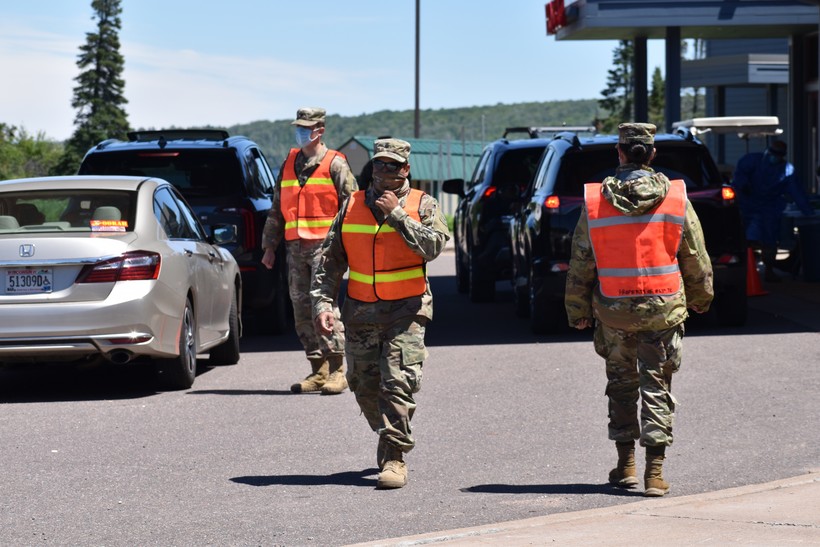 The Wisconsin National Guard offered several community testing sites in Bayfield County in June, including the above event at Red Cliff.
Danielle Kaeding/WPR

Guard Says Samples Were Overlooked During Transfer To Lab
By Danielle Kaeding
Share:

A majority of samples taken at one COVID-19 testing site couldn't be analyzed after they were left behind in a hot vehicle. Now, the Wisconsin National Guard is holding another drive-thru testing event in northern Wisconsin Friday to give people another chance to get tested.

Bayfield County and the Guard held a community testing event in Iron River on June 18, during which 214 people turned out to get tested for COVID-19. Of those, the specimens for 142 people couldn't be tested when a cooler containing the samples was overlooked after they were slated to be transported to a Madison lab for analysis, according to Guard spokesperson Capt. Joe Trovato.

"Our troops simply missed them during the transfer and they got left in a vehicle," said Trovato. "By the time it was discovered, they'd been at too high of a temperature for too long of a time, and so they wouldn't have been valid samples."

Specimens must be kept cold and tested within 72 hours after they're collected, according to the Wisconsin Department of Health Services. The agency said there are few times when tests have been canceled due to storage or other errors, noting efforts are made to resolve the root cause and notify individuals of the issue and other testing opportunities.

Trovato said the Guard wanted to make it right by holding another testing event and apologized for the inconvenience caused to those who took part on June 18.

"While it's a small percentage of the nearly 200,000 samples we've collected statewide over the past several months, it is a big deal to those individuals that are affected," said Trovato. "We're looking into this issue a little more closely to see what processes and controls we can implement to ensure something like that doesn't happen again."

Trovato said those discussions are taking place within the unit that administered the tests, saying it was an "honest oversight." He said there have been a few instances in the last two months where people have had to get retested. But, the incident with Iron River's samples is the only incident where that many specimens couldn't be analyzed.

Bayfield County Health Director Sara Wartman said in a June 26 YouTube update that she and her staff were disappointed to learn the labs couldn't be tested, citing the time invested and acknowledging the anxiety and frustration of those who waited for results.

"It was certainly something that was unexpected, and we hope doesn't happen again," Wartman told WPR in an interview. "But we also decided that this was a good time then to do a second attempt and try to kind of repair or fix the issue and offer it one more time to those people."

Wartman said she and her nurses have notified individuals whose tests were unable to be evaluated, and encouraged them to get retested.

There will be 400 tests available at Friday's follow-up testing event, and anyone can get tested even if they're not displaying symptoms of COVID-19. Health officials are also encouraging anyone to get tested who previously had symptoms but is no longer showing signs of the virus. She's also urging people to get tested if they've been moving around more since the state's "Safer at Home" order was struck down.

"We definitely encourage people who haven't been social distancing, wearing a mask, staying at home, avoiding social gatherings, any of those people we would encourage to come even if they don't have symptoms," she said.

Wartman added that seasonal and second homeowners who live in the area are also welcome even if they're out-of-state residents. She hopes the results will guide the county's coronavirus response moving forward.

Bayfield County reported its fourth confirmed case of COVID-19 this week after an individual tested positive after attending a hockey tournament in Ashland on June 27 and 28. Anyone who attended the event has been urged to get tested.

The Wisconsin National Guard will offer free testing at the event in Iron River this Friday, July 10, from 11 a.m. to 7 p.m. at the Iron River Community Center.