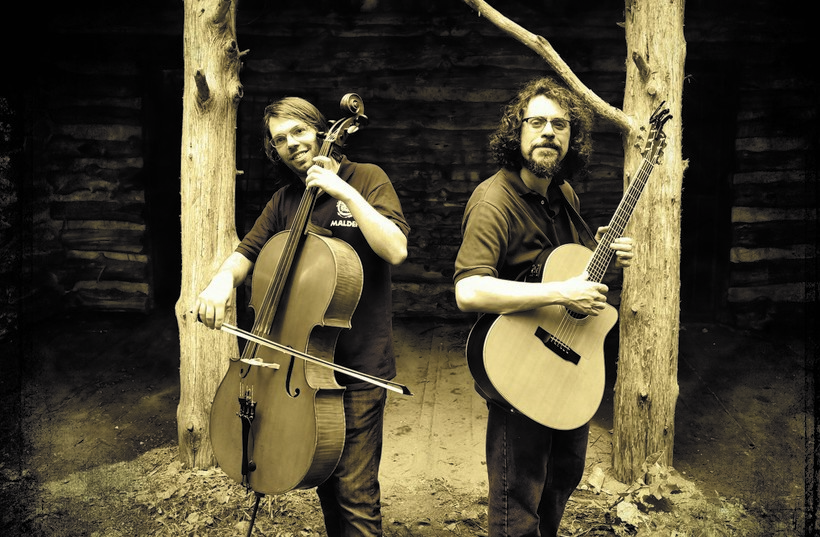 Photo courtesy of Nathans and Ronstadt

Song Comes Off Their Latest Album, 'Shadow Of The Cyclone'
By Dan Robinson
Share:

Writing can be a struggle, whether it’s songwriting or penning a novel. The duo of Aaron Nathans and Michael G. Ronstadt recently explored this territory in their song, "Ghost Writer," the opening track to their 2020 album, "Shadow of the Cyclone."

When they perform, Nathans mainly plays guitar and sings, while Ronstadt (who is the nephew of Linda Ronstadt) plays cello. On the album, however, they perform on 33 different instruments, most of them played by Ronstadt, who lives in Cincinnati where he is a frequent recording session player and teaches cello.

"Ghost Writer," according to Nathans who wrote the song, is about "a reclusive author in a small New England town. It's basically the J.D. Salinger story — a man becomes very successful as a writer, then decides he doesn't like the limelight and retreats, but the world wants more. In this version, the writer falls onto hard times and decides he needs to start writing again to pay his bills. But he's made a decision to put his pen down, and therein lies the struggle."

The instrumentation on the track adds to the haunting quality of the music, with the backdrop of organ and Ronstadt’s cello, allowing Nathans full baritone voice to draw the listener in. The song, for me, reaches its climax with the lyrics that portray the main character as a deity (albeit a thirsty one) who decides what happens in the world he creates:

He looks to the skies/And he closes his eyes
As he waits for the words to appear
He hears them and then, he puts down his pen
And he goes to the fridge for a beer
He is G-d, the decider
His choice/Ghost writer

"Simply Folk" and WPR are very pleased to host the premier of the video for "Ghost Writer" right here, right now… kind of fun for a radio program!

Nathans has roots in Madison. He said he "began playing guitar and writing songs when I lived in Madison roughly two decades ago. I worked for The Capital Times covering the (University of Wisconsin) System, and I remember sitting at the Board of Regents meetings at the top of Van Hise Hall and scrawling song lyrics in my reporter's notebook. I played my first gig at the Speed Jump on the east side of town, and I got involved in the Madison Songwriters Group, led by Eric Hester. The creative spirit in town, combined with a close group of friends devoted to the craft of songwriting, helped me feel confident and comfortable writing songs."

Nathans and his wife moved out east in 2006 to be near family, and they now reside in Philadelphia, where he’s begun a songwriting group like the one Madison.

"Writing is a gift, and I can't imagine stopping cold. But there are people who have done it. Even though Billy Joel is hardly reclusive, he is a masterful writer, and he won't give us more and it's maddening," Nathans said. "I love songwriting. It would be hard to stop."