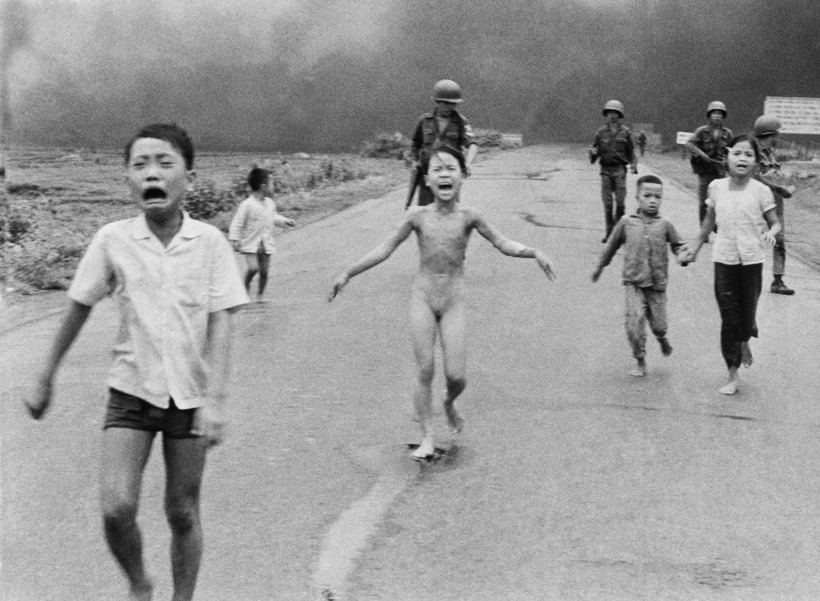 Kim Phúc Speaks In Madison On 47th Anniversary Of Attack On Village During Vietnam War
By Elizabeth Dohms
Share:

Kim Phúc had heard the soldiers screaming for them to run.

She had been playing with her cousins inside a temple near a bomb shelter — some parents in the community thought of the temple as a haven, a safe place for the children as the Vietnam War raged on around them.

She was fixated on an airplane that passed by "so fast, so loud and so close." She should've been running, she said. But she just stood there. She heard a sound — "bupbup bupbup" — and the fire was all around her.

Barely nine years old, she kept thinking she was going to look different, people were going to see her differently. The fire crawled up her left arm, burned her right hand and turned her clothes to ash.

She stopped thinking and started to run. She found her bothers, cousin and some soldiers and kept running until she couldn't anymore.

"That day, what happened to me — I never forget it," said Phúc, author of Fire Road: The Napalm Girl's Journey through the Horrors of War to Faith, Forgiveness & Peace.

Phúc will speak from 5:30 to 8 p.m. on Saturday at the University of Wisconsin-Madison Pyle Center, about her experience on the 47th anniversary of the napalm attack that her village experienced during the Vietnam War. Nick Ut, the photographer who captured an iconic war image of Phúc's pain and desperation, will make a special appearance as well.

The event is free to the public and will be followed by a reception and book signing. In this Sept. 25, 2015 photo, Kim Phuc shows burn scars on her back and left arm at a hotel in Miami. The scars were caused by a napalm attack when she was 9 years old in Trang Bang, Vietnam. Nick Ut/AP Photo.

The photo, unprecedented for the Associated Press with full frontal nudity, outraged the U.S. and some postulate that it played a part in ending the war, although critiques say anti-war sentiments were already bubbling up years earlier.

Phúc said she lost hope when she was burned and became a "victim of war." She said she was hateful, angry and lacked a desire to live. Hope rebounded with a newfound Christian faith.

"That faith, it helped me to learn to move on, to learn to have peace and joy and hope," she said. "The most important thing (is) that I learn to forgive who caused my suffering since I was 9 years old."

Now, Phúc is focusing on helping children around the world who are suffering from the harrows of war and lack hope. Her nonprofit organization, the KIM Foundation International, is dedicated to healing children of war.

"My life is I give them hope," she said. "Because I am still alive. My voice is still on behalf of all of them."

Fourteen months after being discharged from the hospital, Phúc saw the picture that won photographer Ut a Pullitzer Prize. She wondered why he took it.

Now, she recognizes it as a powerful driver.

Phúc grew older and had a child, who she promised would never feel the same pain the little girl in the picture did.

"Children who suffer right now ... I just let them know, 'Never give up. You always have hope,'' she said.