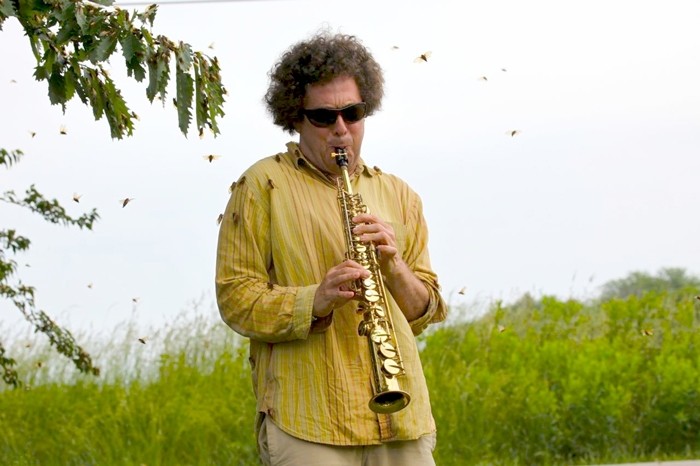 A Musician Hears The Origins Of Music In The Mosquito's Whine

'This Is The Earliest Music That's Around Us,' Says David Rothenberg
By TTBOOK Staff
Share:

We Can Genetically Exterminate Disease Spreading Mosquitoes. But Should We?
Why Famed Biologist E.O. Wilson Wants To Eradicate Killer Mosquitoes

For many of us, the sound of an insect nearby is often followed by another sound: the slap of the hand or swish of the swatter. But musician David Rothenberg claims that these hums and whines are an ancient music that gave humans rhythm.

"We like buzzy, rattly, scratchy sounds," he said, "and we have percussion instruments that make them." The mbira — the African thumb piano — is one example, but so is the distortion that we often use on electric guitars.

As a musician and composer, Rothenberg has spent a lot of time researching and even playing with non-human subjects. Some of his previous work includes "Why Birds Sing," featuring music and bird song, and "Whale Music," where he would actually listen to and improvise with whales from the bow of a ship.

But insects were here first. "This is the earliest music that's around us. As humanity started to decide what sounds we should make, we heard all these sounds around," Rothenberg said.

For his most recent book and album, "Bug Music," Rothenberg used the actual sounds of insects, as well as sounds taken from cutting-edge science. Through a technique called atomic force microscopy, Igor Sokolov and his collogues at Clarkson University have been able to record tiny surface vibrations on the molecular level inside the brain of a living mosquito.

Rothenberg then used this as a starting point for his composition, "Insect Drummers 1: Inside the Mosquito's Brain."

As transformative as Rothenberg's jazz compositions might be, for contemporary listeners, the sound of insects is annoying or even alarming. Insect sounds can represent an immediate and long-term threat to our health. With the constant problem of malaria and newer diseases like the Zika virus, scientists are currently engaged in a very real debate over whether certain species of insects should be permanently exterminated.

Rothenberg thinks that would be a mistake. "It would be a deep tragedy to lose the whine, the incessant whine, the annoying sound, of the mosquito," he said. "If this sound was no longer heard, we would have lost something important to humanity."

"Like the great sound of the flocks of passenger pigeons overhead," he argues, "people would want to know what mosquitoes sound like."