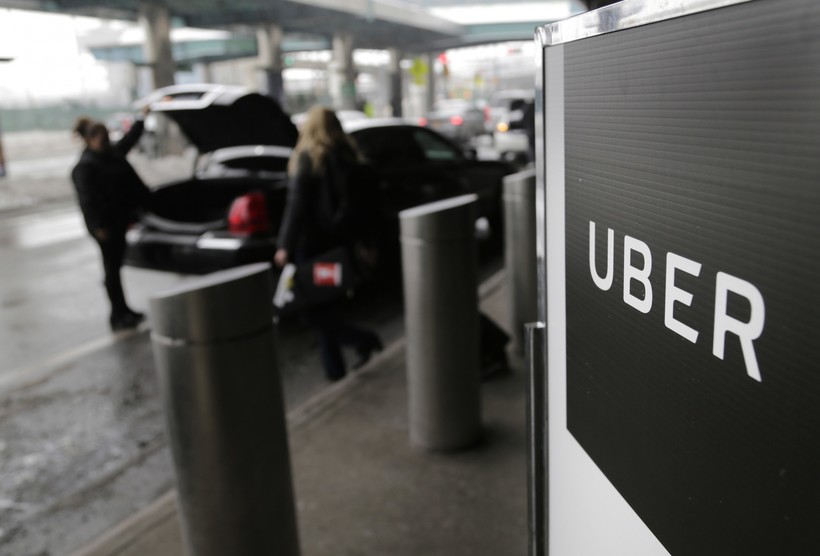 A sign marks a pick-up point for the Uber car service at LaGuardia Airport in New York. Seth Wenig/AP Photo

As the launch date for unemployment benefits for self-employed and contract workers nears, some jobless workers in that program say the wait has pushed them to the financial brink.

Tyler Salmeri, a Little Chute resident who previously worked as a driver for Uber and Lyft, said he and his family may soon lose their house after going almost three months with no unemployment aid.

"Having three, four, five month gaps in between getting any money makes it very difficult to keep up with utilities, keep up on rent, even get groceries," said Salmeri, who has dealt with delays receiving his unemployment since the program started at the outset of the pandemic. "We've ... been really struggling just to make sure we don't get kicked out of our home and have something turned off."

In addition to everyday costs like rent and groceries, Salmeri's family was recently hit with medical bills after his wife had to undergo surgery in September.

He said he's been borrowing money to cover some of the mounting expenses, attempting to pay those he borrowed from anytime he gets one of the large lump sum payouts issued when recipients get back payments for delayed unemployment. But after going months without payments, he's already tapped many of those sources and maxed out multiple credit cards.

"I haven't slept much in the last year just because of the inconsistency with everything," Salmeri said. "I sleep really well when I get the lump sum, but until then it's pretty tough."

Pandemic Unemployment Assistance (PUA) is a federal unemployment program that grants unemployment benefits to those not typically eligible for unemployment, like self-employed and contract workers. The PUA program was created in March 2020 under the first round of federal coronavirus relief. On Tuesday, the state Department of Workforce Development (DWD) will launch benefits created under both the second and third rounds of federal COVID-19 aid.

Last week, DWD moved the launch date for both new sets of PUA benefits up to March 30, nearly a month ahead of schedule. Previously, DWD estimated that the benefits wouldn't be ready to launch until April 21.

"A month sooner than what they said is great," Salmeri said. "It's still way, way, way too long to wait. But ... if I had to go another month without any money coming in, I probably would have been kicked out of our house at this point."

When asked about the months-long delay setting up the benefits, DWD communications director Amy Barrilleaux acknowledged the financial hardship it caused.

"You know, there's a lot of pain in that wait, and we know that," Barrilleaux said. "That's why ... we're pleased to be bringing these payments a few weeks early, but we have to recognize that it's really three months late."

DWD said it was able to speed up the PUA launch by splitting up the program's implementation into phases, having the payment phase of the process come first. That means those who had previously exhausted their PUA benefits, about 17,200 people in Wisconsin according to DWD estimates, will get all back payments they've been waiting on after the program launches on March 30, although the department notes it can take up to two days for payments to post in a recipient's bank account.

The rest of PUA implementation includes phases for adjudication and disputed claims, and work on those parts of the program will continue, the department said.

Wisconsin PUA recipients are among those who have undergone the longest wait for unemployment benefits, some of which were approved under former President Donald Trump in December.

With the passage of the third round of federal COVID-19 aid, PUA recipients are now eligible for up to 79 weeks maximum under the program through Sept. 4 in Wisconsin.