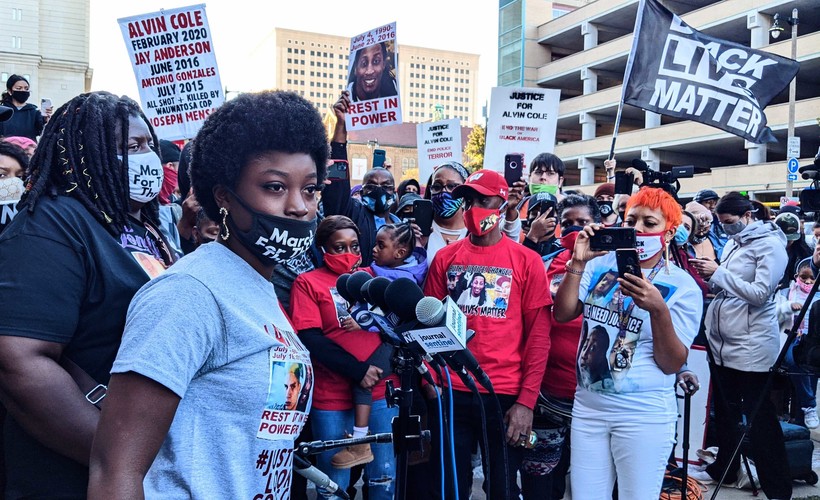 Taleavia Cole, the sister of Alvin Cole, and his family spoke after the Milwaukee County district attorney announced Wednesday, Oct. 7, 2020, that he wasn't pursuing charges against the Wauwatosa police officer involved in a fatal shooting earlier this year. Angela Major/WPR

The mother and sisters of Alvin Cole, the Black teen killed by a Wauwatosa police officer earlier this year, have been arrested by police who were cracking down on protesters out after a curfew following a decision not to charge the officer.

Cole’s mother, Tracy Cole, and his sisters, Taleavia and Tristiana Cole, were arrested at about 8:30 p.m. Thursday along with several others in a church parking lot in Wauwatosa, the Milwaukee Journal Sentinel reported, citing multiple witnesses.

Alvin Cole was killed in February by Wauwatosa Officer Joseph Mensah. Mensah killed three people in five years while on duty. On Wednesday, Milwaukee County District Attorney John Chisholm cleared Mensah in the shooting of 17-year-old Cole, although Chisholm did not say the killing was justified.

It was the third time Chisholm has cleared Mensah.

Anticipating protests, the city of Wauwatosa implemented a 7 p.m. curfew Wednesday that is in effect through Monday. City officials also asked Gov. Tony Evers to activate the National Guard.

Motley tweeted Thursday night that Tracy was arrested "for peacefully protesting" and "ended up in the hospital." Motley said Tracy Cole was taken to nearby Froedtert Hospital with an injury to her arm and forehead. One daughter, Tristiana, was taken there as well.

They arrested Tracy Cole for peacefully protesting tonight! She ended up in the hospital - more to follow :-(

Later Thursday night, Motley tweeted both were released from the hospital. Details on why Tristiana was taken to the hospital weren’t immediately known.

Tracy & Tristiana Cole just released from the hospital. Absolutely outrageous that they were attacked for peacefully protesting! Police refusing to give answer on where Taleavia Cole has been taken.

"It is outrageous that they are targeting journalists, protesters and members of the Cole family," Motley said during a press conference Friday afternoon. "And what happened last night is absolutely disgusting. And we intend to hold them accountable as much as we legally can."

According to a post on the police department's Facebook page, the department arrested 24 individuals during "unlawful demonstrations." Citations for violating an emergency order were issued to 19 people.

"Additional charges may be issued after a comprehensive review of videos, reports, and other evidence," the post reads.

Motley said the fact that Cole family members weren’t ticketed shows they did not violate the law.

Motley has sent a letter to Wauwatosa Police Chief Barry Weber asking no videos or evidence from Thursday be destroyed.

State Rep. David Bowen, D-Milwaukee, has been marching with the protesters since June. He said the group was peaceful.

"There was no public safety threat," Bowen said. "There was no violence happening. No destruction happening. It was all about making sure people were told to shut up. To go back to Milwaukee."

According to The Associated Press, a Facebook livestream captured only audio of Tracy Cole's arrest, and it was recorded by her third daughter, the newspaper reported. On the recording, Tracy Cole can be heard screaming in pain as she was being arrested, saying police injured her arm, hit her in the head and used a stun gun on her.

"I’m Alvin Cole’s mother," Tracy screamed repeatedly as officers pulled her out of her car, according to AP.

"I can’t believe y’all did this to me. Y’all killed my son," she screamed at the officers.

Tracy said her head was bleeding and she believed her arm was broken, according to the livestream.

Wauwatosa police tweeted Thursday night that "several" people were arrested, and said one woman requested medical attention and was taken to a hospital, according to AP. 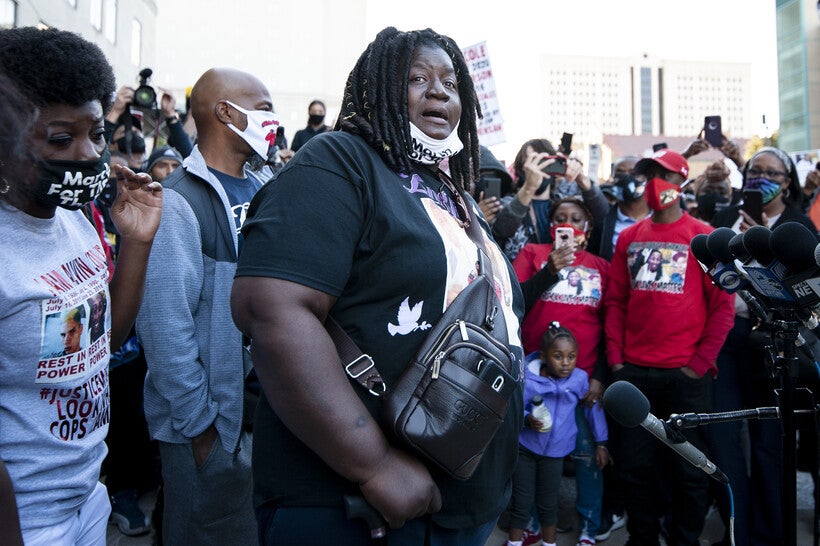 Mensah has been suspended with pay since July. An independent investigator appointed by the Wauwatosa Police and Fire Commission at the same time Mensah was suspended is recommending the officer be fired.

U.S. Attorney Steven Biskupic released a report Wednesday before the announcement by Chisholm. The report concluded Mensah should be fired because the risk of a fourth shooting is too great. The report also found Mensah used improper force in the Anderson shooting.

"I find that authorizing Officer Mensah to continue the performance of his full police duties, including the concurrent authorization for the potential use of deadly force, for a fourth time, creates an extraordinary, unwarranted and unnecessary risk to the Wauwatosa Police Department, and the City of Wauwatosa," Biskupic's report states.

Milwaukee County Supervisor Shawn Rolland, who represents Wauwatosa, is asking the city's Police and Fire Commission to meet next week and begin weighing Biskupic's report. The commission is scheduled to meet Wednesday, Oct. 21.

"In Wauwatosa, helicopters are circling above us, the National Guard is deployed on our streets, a curfew is preventing us from walking outside in our own yards, businesses are boarded up, there’s broken glass on our streets, families are marching and mourning the loss of their loved ones, police officers are at risk, and none of us know what tomorrow will bring," Rolland said. "If there was ever a time for community leaders to act with urgency — this is the time."

Rolland extended his condolences to the Cole family. He said as a father of three, he can't imagine the loss they are feeling.

"I grieve with them, and I will never understand the pain," Rolland said. "I do empathize with them and I understand why they are out on the streets and why they are encouraging others to advocate justice for their son. If the tables were turned, I can wrap my head what they are going through."