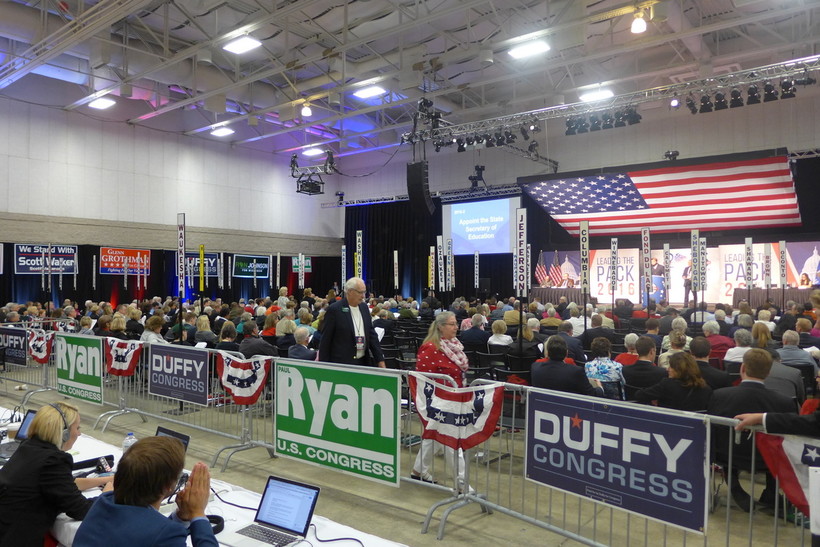 Others Urge Republicans To Embrace Likely Nominee To Prevent A Clinton Presidency
By Shawn Johnson
Share:

Most of Wisconsin’s top Republicans made no mention of Donald Trump during their annual state party convention on Saturday, conducting the event as though the likely GOP presidential nominee didn’t even exist.

Their silence was in stark contrast to two of Wisconsin’s Republican congressmen, who told party faithful that if they don’t back Trump, it’s as good as voting for Democrat Hillary Clinton.

Wisconsin was the last state Trump lost in his march to the GOP nomination, a defeat some Republicans hoped would be the beginning of the end for him. Trump lost badly in Republican strongholds like southeast Wisconsin as Wisconsin’s GOP officeholders teamed up with conservative talk radio to support Ted Cruz.

Gov. Scott Walker, who was mercilessly attacked by Trump after he endorsed Cruz, didn't talk about the presidential race, instead using his speech in Green Bay to promote Republican U.S. Sen. Ron Johnson.

"I’ve been asked for the last two weeks, over and over and over again by the media, ‘Is the party united here in Wisconsin?’ Well, I want to tell you clearly, the Republicans in this hall and across this state are overwhelmingly united behind Ron Johnson to be our United States senator," Walker said.

Many speakers alluded to Trump in generic terms, referencing "the Republican nominee" or "our candidate."

But U.S. Rep. Sean Duffy was far less reserved, completely embracing Trump in his remarks, a stance he noted was somewhat "taboo" in the Wisconsin Republican Party.  Duffy represents Wisconsin’s 7th District in Northern Wisconsin, one of the two congressional districts Donald Trump carried in the April 5 primary.

U.S. Rep. Jim Sensenbrenner, who said he voted for Cruz, said that if Republicans stay home this election, it’s as good as voting for Clinton.

"Donald Trump has won our nomination, fair and square," Sensenbrenner told the convention crowd to a smattering of applause.  "The time has come to look at what the stakes are."

Johnson’s reelection campaign against former Sen. Russ Feingold was a central theme throughout the convention.  At least at this point in the race, Johnson is widely viewed as the underdog, trailing Feingold in both polling and fundraising.

Johnson gave his convention address wearing blue jeans and blue button down shirt with the collar open and sleeves rolled up, which he said is what he wore when he first got into the race for U.S. Senate in 2010.

"Recognize the outfit?" Johnson asked the crowd.  "I haven’t changed.  And you know who else hasn’t changed?  You. We are the same freedom-loving people we were in 2010."

Johnson made repeated references to his first campaign, when he was swept into office by a Republican wave.

Johnson also avoided mentioning Trump by name during his speech.

Despite a conscious decision to mostly ignore Trump at the convention, some Republicans fear his presence at the top of the ticket could hurt them in races down the ballot.

Assembly Speaker Robin Vos said he would "work for the Republican nominee" this election, but he urged party activists to remember his candidates.

State Sen. Majority Leader Scott Fitzgerald, who said the day after Trump all but locked up the GOP nomination that "we’re on the Trump train now," was nowhere near as blunt at the convention, but Fitzgerald alluded to the new voters Trump is turning out even as he turns off some Republicans.

Wisconsin Democrats will visit Green Bay in three weeks for their own state party convention.  Their presidential primary is ongoing with Vermont Sen. Bernie Sanders vowing to stay in the race.

Both parties hold their national conventions in July.