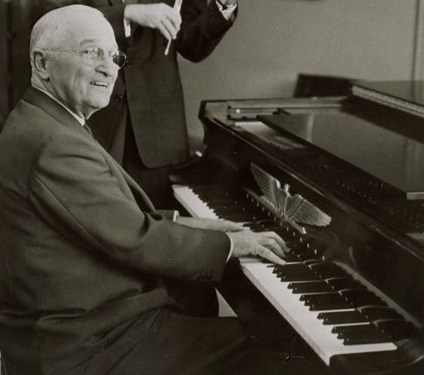 He's been described as the most musical of all U.S. presidents, but Harry S. Truman was as outspoken about his musical tastes and abilities as he was about everything else. Truman had always taken to music [With the encouragement of his mother, he took piano lessons from the time he was eight until 16 or so. He enjoyed practicing, saying that it was pleasure, not work.] Truman quipped that he hadn't pursued a musical career only "because I was not good enough."

Truman was particularly fond of the music of Mozart, Chopin, Liszt, Mendelssohn, and Debussy, but he also liked Bach's Well-Tempered Clavier and Gershwin's Rhapsody in Blue. He sometimes surprised people who asked him about particular favorites. In private, the president from the "Show-Me State" said of the popular Missouri Waltz, "I don't give a damn about it." He particularly liked the Pilgrims' Chorus from Wagner's Tannhauser and “Toreador” from Bizet's Carmen. But in the same breath he would add the World War I hit "Hinky Dinky Parlez Vous" and a ditty called "Dirty Gertie from Bizerte."

One frequent visitor to the White House noted that Truman seemed to find it hard to pass a piano anywhere without sitting down and playing it, no matter who was around. He played for Stalin and Churchill, he played for movie stars, he even played for concert pianists.

And yet, during his two terms, Truman held only one concert series in the White House. He had a good reason though -- the place was unsafe. The upper floor of the building was so shaky that the Steinway of his daughter Margaret cracked it. And when pianist Eugene List played in the East Room in 1947, the seating omitted a large area beneath a crystal chandelier because of the danger that it might fall and kill somebody.

Much as he enjoyed playing the piano, for Harry Truman singing was a different matter. "I never sing," he said one time, "I'm saddest when I sing and so are those that listen to me."