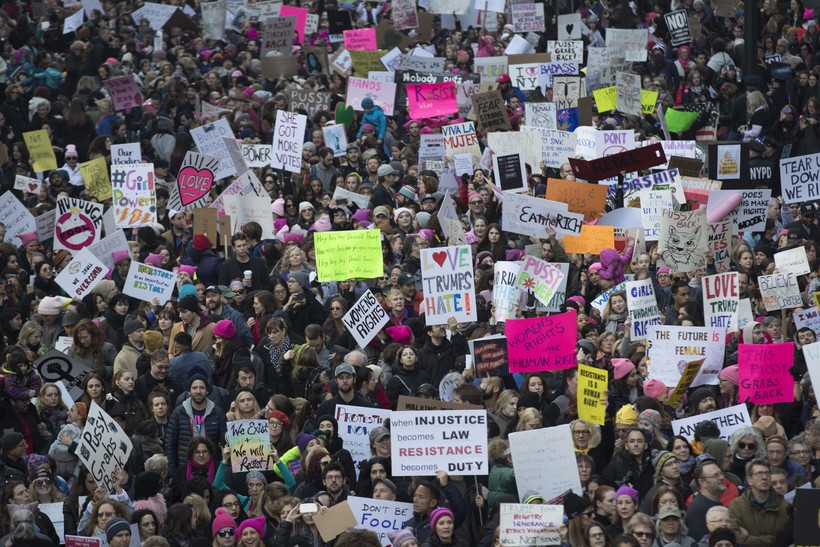 More Women Are Politically Active, But Less Women Are Running For Office

President Trump’s election spurred women to protest in the streets across the nation, including the largest single-day march in United States history.

But it didn’t spur them to run for office themselves. That’s according to a new study by Politico, American University and Loyola Marymount University.

The study found what it calls a "Trump effect," said Jennifer Lawless, one of the authors of the study.

"There was widespread speculation when we saw increased levels of political engagement and activism, that the upside for Democrats of Donald Trump getting elected is we’d see a surge in the number of female candidates," she said. "What we call the 'Trump effect' is in fact that increased activism, but no commensurate surge in political ambition. Most of the women who have been energized are still not at all interested in putting their hats into the ring."

The survey looked at 2,100 "potential candidates," who are employed full-time and have college degrees.

In some ways, the results were consistent with past surveys of the same group of people. Women for years have been equally politically active with men. But when it comes to actually running for office, women have always been much less likely, Lawless said.

"They think that there are more effective ways to bring about positive change than putting their own names on the ballot," she said.

However, this year, women were much more politically active than men. The study’s authors were surprised when it didn’t translate to potential runs for office. Negative feelings towards a political candidate can sometimes politically motivate people.

Democrats felt much more negatively toward Trump than Republicans did toward Hillary Clinton, Lawless said.

Other times, it’s a positive influence that is the motivator.

"Democratic men and women are roughly equally likely to say that a party leader, an elected official or a political activist has encouraged them to run for office," she said.

But women were one third less likely to actually run, according to the survey.

In recent years, women have become more prominent in the political sphere, flagged by candidates like Sarah Palin and Clinton. It might lead to the assumption that women are inspired by seeing others like them.

However, there’s a Catch-22, because seeing how these prominent female candidates are treated can be off putting, she said.

"A lot of the time, studies reveal that there doesn’t seem to be a broad role model effect as far as seeing women on the ballot because these two competing dynamics seem to work hand-in-hand," Lawless said.