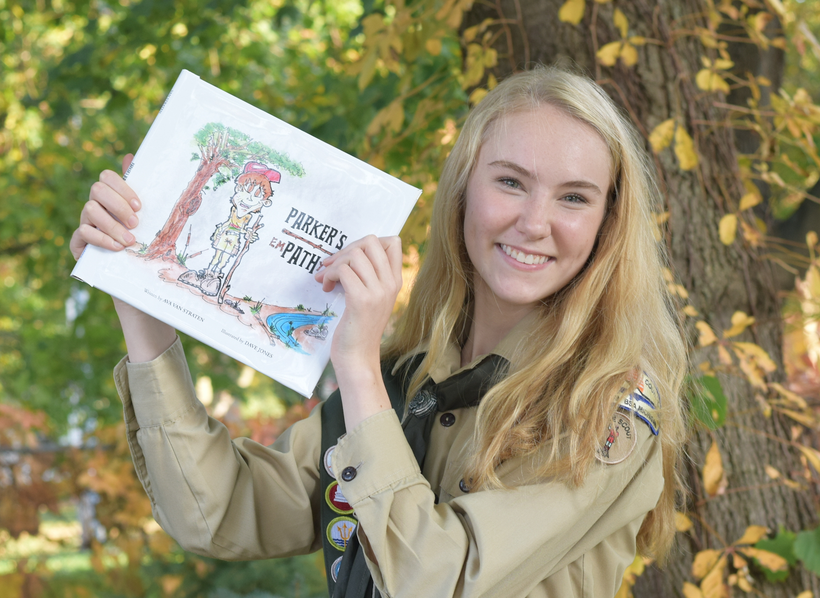 Ava Van Straten is a member of the inaugural class of female Eagle Scouts. For her project, the De Pere native created a children's book and curriculum designed to teach elementary schoolers about the importance of empathy. Photo courtesy of Ava Van Straten

In February, Ava Van Straten, of De Pere, will be recognized as a member of the inaugural class of female Eagle Scouts.

According to Boy Scouts of America, only 6 percent of scouts earn the prestigious rank. Across Wisconsin’s six councils, 10 girls had achieved the milestone by mid-December with at least six more planning to complete the final steps of the process before the first female Eagle Scouts are honored in early 2021.

Van Straten, 17, joined Girl Scouts as a kindergartner, earning her Gold Award — the highest achievement within the organization — last spring.

Her two older brothers had gone through Boy Scouts, and when the program opened to girls almost two years ago, she jumped at the chance to join.

"The Eagle Scout isn’t an award that you earn, but rather something you carry with you for life and incorporate into your career and your family," she said.

Traditionally, those who earn the rank of Eagle Scout have been scouting for years. The first class of female Eagle Scouts will have done it in 18 to 20 months, she said.

"Earning the rank of Eagle Scout takes hard work and perseverance, and we are thrilled that hundreds of young women will be recognized as Eagle Scouts soon. In earning the Eagle Scout rank, young people gain new skills, learn to overcome obstacles and demonstrate leadership among their peers and in their communities," Boy Scouts of America shared in a statement.

For her project, Van Straten created and distributed a children’s book and curriculum for elementary schoolers to help them learn empathy, a trait that’s been shown to decrease in kids as screen time increases, she said. Van Straten was able to raise $11,000 from in-kind donations that allowed her to distribute more than 4,000 copies across the country with the help of volunteers.

The coronavirus pandemic led to some unexpected delays, but copies of the book, called Parker’s Path, have already made it to kids as far as Colorado and New York, she said.

"It’s truly an amazing feeling, and I’m so glad they’re able to experience the curriculum and learn more about empathy and how to incorporate it into their own lives," she said.

Van Straten, a high school senior, previously wrote a children’s book about kindness called "Mary’s Kind Heart." She’s still deciding on her plans for college, but she has an idea of what she’d like to do long term.

"I hope to some day start a publishing and media company that helps to promote what I call the 'common more character traits' such as kindness, empathy, leadership, just being a good person. I think that is something that the world would really benefit from, especially right now," she said.

It’s been an usual year for the Bay-Lakes Council of Boy Scouts of America, Gordon said. Early in the pandemic, it was one of the first groups to offer a virtual camp-in, encouraging kids to set up their tents in the living room or the backyard. The idea spread across the country, she said. The pandemic has created greater need in many communities, with some scouts rising to the challenge, collecting food and raising money for those in need, she said.

"We still have our units that are still out there meeting virtually, trying to keep scouting strong, still doing service projects in our area," she said. "And then you have scouts like Ava (Van Straten) who, despite the pandemic, were still able to complete their Eagle Scout which is incredible."

Like Van Straten, a lot of the girls who first joined Boy Scouts of America had brothers in the program, but that’s changing, Gordon said. Recruitment was down this year as the coronavirus made outreach more difficult. But the pandemic has caused many Wisconsinites to reconnect with nature: It was a record year for state park attendance. Gordon hopes that will spark interest in scouting moving forward, she said.

As a teenager, Gordon took part in a co-ed scouting program called Venturing, and she loved it, but she wishes she could have been an Eagle Scout, she said.

"When I first heard that we were allowing girls in and that they could earn that rank, I was absolutely thrilled. I was so excited and so proud that these young women would have an opportunity that I did not. My husband is an Eagle Scout, and so I just am very excited by the fact that my future children could potentially be an Eagle Scout no matter if they’re a girl or a boy," she said.