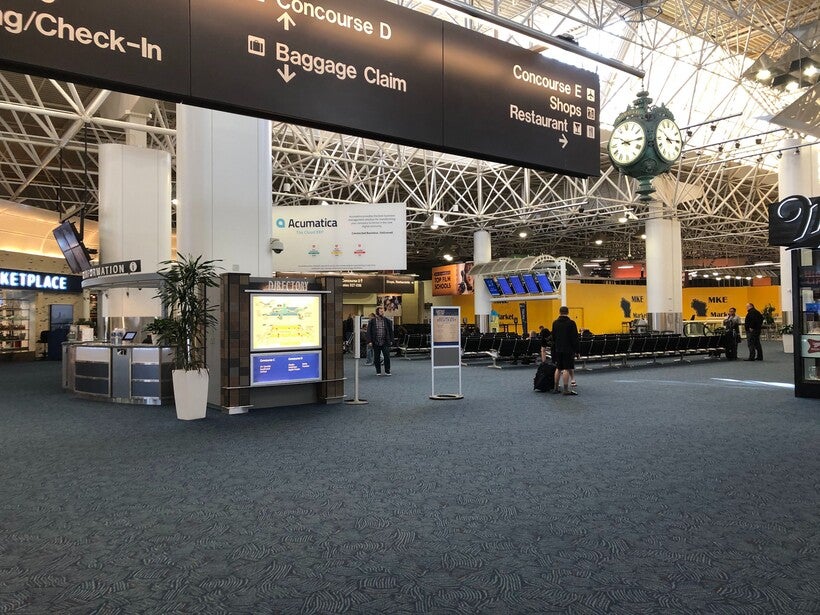 The Mitchell International Airport was virtually empty on the morning of Tuesday, March 10, 2020. On Tuesday the Wisconsin Department of Health Services announced the third positive test for COVID-19, the new coronavirus that is quickly spreading across the globe. Corrinne Hess/WPR

As COVID-19 cases decline and more people are vaccinated, travel is returning to people’s minds. Soon, there will be more flight options at Milwaukee Mitchell International Airport.

Discount airline carriers JetBlue and Spirit Airlines have announced they will begin offering direct flights from Milwaukee, and new direct flights to the East and West coasts have been announced in recent weeks.

The airline industry has responded to the pandemic by changing its business model from focusing on business travelers to more leisure travelers, said Harold Mester, spokesperson for Milwaukee Mitchell International Airport.

The new flights will be on Fridays, Saturdays and Sundays, depending on the destination.

JetBlue will fly nonstop from Milwaukee to Boston and John F. Kennedy International Airport in New York beginning in 2022.

Mester said airlines will try these new nonstop destinations in Milwaukee and other cities through the summer to see if they catch on. Mitchell International will get to keep the routes if passengers use them, Mester said.

"In order to keep these routes over the long term, we need to make sure individuals from our community use this airport," Mester said. "We own this airport collectively, and if individuals use other airports in other states, we’re going to lose these routes."

"It’s wonderful news for Milwaukee, and by connection the state of Wisconsin," Sorensen said. "It’s consistent with what is happening with the airline industry. There is more point-to-point flying. Hubs are being bypassed with smaller aircraft and not daily frequency."

He said companies are going to invest in new technology rather than sending employees across the country for meetings.

"When you look at Zoom or these other technologies of today, three years from now they are going to be so much better because that is where the money is flowing to, so that will be further attraction for people to stay with those," Sorensen said.

On April 2, the Centers for Disease Control and Prevention announced it was safe for people who are fully vaccinated to fly.

Still, attendance is down at the airport. The last traffic report released by Mitchell International shows that in February, 93,846 people were scheduled to fly from Milwaukee; that’s down about 63 percent from February 2020, just before the pandemic began.

Mester said at the end of March and early April, passenger numbers were up considerably from where they were earlier in the year, but depending on the day, they’re down 40 to 50 percent from where we would be on the same day during a normal year.

"Things are continuing to gradually increase, and we’ll probably see another bump this summer," Mester said.

One airline that has failed to launch is Midwest Express. The storied airline famous for its warm chocolate chip cookies operated in Milwaukee from 1984 to 2009 before merging with Frontier Airlines in 2010.

In 2019, Midwest announced it was coming back to Milwaukee. The relaunch was postponed.

Midwest spokesperson Laurie Coleman said there are no updates to share on the company coming back to Mitchell International.

"We remain ever determined in our efforts to bring Midwest Express back," Coleman said. "Despite all that has happened with the airline industry the past year, there is ever-increasing passenger confidence which has opened the door to renewed investor interest."

Sorensen, who was the director of marketing at Midwest Express (formerly Midwest Airlines) from 1984 to 1996, doesn’t think Midwest has a sustainable model in the current environment. He believes the only airlines that will be successful are low-cost models, like JetBlue and Spirit.