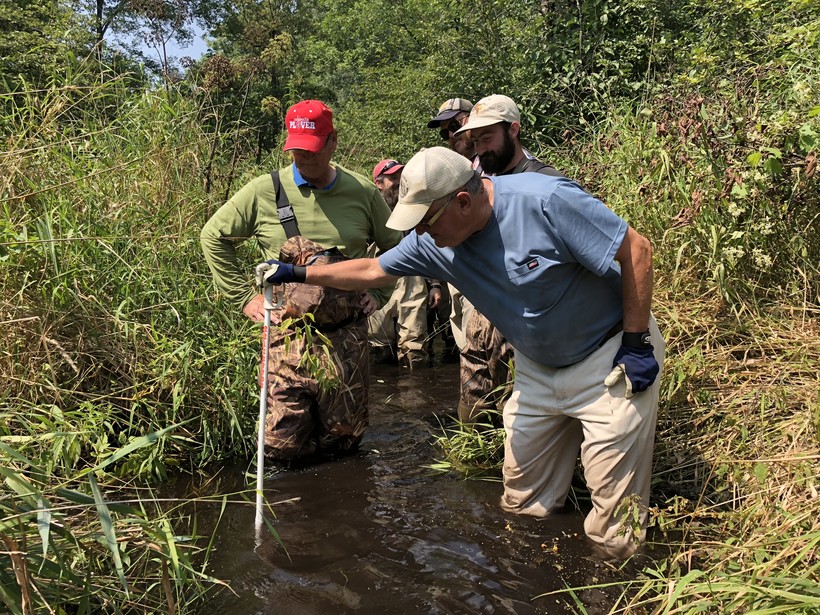 More than $2.6 million from public agencies and private sources is supporting efforts to increase the flow of the Little Plover River and improve the watershed. The river in central Wisconsin has been closely studied and monitored as stretches of the river have run dry in recent years due to pumping from high-capacity wells.

The Central Sands area has more than 3,000 high-capacity wells that withdraw as much as 100,000 gallons of water per day. Now, growers, conservationists, local government and others are partnering to restore the Little Plover River and watershed.

Village of Plover Administrator Dan Mahoney said the village is buying 60 acres of farm land owned by Myron Soik & Sons Inc. with the help of $1.4 million from the Wisconsin Department of Natural Resources. The purchase involves taking land of agricultural production and de-commissioning a high-capacity well.

Other projects include habitat and forest restoration, as well as voluntary soil and water conservation practices with farms. They also include efforts to reduce the width of the river and deepen the channel.

"The work that’s happening in the Little Plover Watershed will not just help heal the Little Plover River but can be used to inform water management and watershed restoration practices not just in central Wisconsin but hopefully around the state," said Erin O'Brien, policy programs director for the Wisconsin Wetlands Association.

Scientists have said irrigation and agriculture have had major impacts on the Little Plover River. A recent study found irrigation accounts for 80 percent of the total water used in the river basin each year. Growers have felt they’ve long been the target of finger-pointing, according to Tamas Houlihan, executive director of the Wisconsin Potato & Vegetable Growers Association.

"The farming community has really embraced this project in terms of taking some of their land out of ag production and yet trying to make sure that we can still grow potatoes and vegetables throughout the Central Sands of Wisconsin," said Houlihan.

The question for researchers is whether enough is being done to restore flows in the Little Plover River, said University of Wisconsin-Stevens Point professor George Kraft, who has conducted extensive research on the river.

"Everything that’s been done for the last 13 years has maybe restored 5 to 10 percent of (the flow of the river)," he said. "Taking 60 acres out of production, that might restore about 0 to 1 percent of what’s missing."

Kraft said pumping is reducing the river’s flow on average about 4.5 cubic feet per second. He said the amount of rainfall and groundwater pumping determine what’s happening in the river.

Houlihan said he believes projects like this will make a difference and improve river flows and the health of the watershed.

"Ninety-nine percent of the time, our growers can irrigate what they need and there’s no impact or very little impact on the river, especially in recent years with all the rain we’ve been getting," he said. "But, when there is a dry up, fish die and that’s not a good thing and our growers know it."

But, Kraft said significant improvements in flows would require changes in water use. He pointed to a study by the Wisconsin Geological and Natural History Survey and U.S. Geological Survey that showed removing about 15 wells closest to the river would substantially increase the river’s flow.

O’Brien said the project is hoping to build on the research that’s already been done.

"I think there’s a lot of incentive for this group, which involves public and private organizations, industry and conservation groups, as well as state and county level participants to pool resources and expertise and recognize that nobody has all the answers, but we have a lot of good minds at the table building on the work that was done previously," she said.

Mahoney with the Village of Plover said the group is just getting started with work to restore the Little Plover River and watershed.

"We’ve come to an understanding that we need to basically manage our use of the environment and especially the groundwater because if we don’t work together — the environment, the municipalities and the ag industry — then that resource won’t be available," he said. "Obviously, that doesn’t work for any of us."