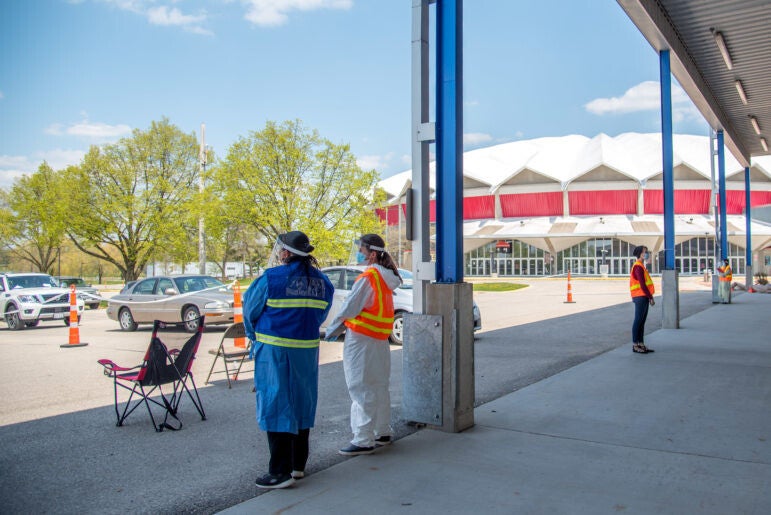 Public Health Madison and Dane County employees and Wisconsin National Guard members operate a drive-through COVID-19 testing facility at the Alliant Energy Center in Madison, Wis., on May 13, 2020. DHS officials urge testing for people who have COVID-19 symptoms — including a cough, shortness of breath, fever and chills — or suspect they were exposed to the virus. Will Cioci/Wisconsin Watch

No New Deaths Reported Sunday, For The First Time In Over A Month
By WPR Staff
Share:

For the first time in over a month, the Wisconsin Department of Health Services reported no new deaths on Sunday. But more than 1,000 Wisconsin residents have died in less than 30 days. The state has averaged 53 deaths from the virus in the past week as the total number of coronavirus cases statewide has doubled in the last month.

As of Oct. 30, COVID-19 had claimed 1,972 lives in the first six months of the pandemic. Since then, more than 1,000 lives have been lost to the virus with 3,005 deaths reported on Saturday. More than three-quarters — 77 percent — of those who have died statewide were age 70 and older.

Of the people who got tested for COVID-19 over the past week, 29.7 percent were positive for the disease, according to DHS. The percentage of new COVID-19 cases among people tested over the last week has been declining, dipping below 30 percent for the first time since the end of October. But it's still significantly higher than it was in early September, when the rate was below 10 percent.

The positivity rate is often read by public health officials as a measure of overall testing levels. A high rate could indicate that testing in the state is limited and skewed toward those already flagged as potentially having COVID-19. A lower rate could indicate testing is more widespread. Changes in the test positivity rate can also speak to COVID-19's spread, if the size and makeup of the testing pool stays consistent.

On Sept. 30, DHS also introduced an alternative positivity rate, one that measures the percentage of tests that are positive, instead of the percentage of people who get a positive result. The new metric takes into account people who have been tested multiple times. The seven-day average for that number is at 13.8 percent.

According to the Wisconsin Hospital Association, there were 1,990 COVID-19 patients hospitalized as of Saturday. A total of 15,823 people have been hospitalized because of the disease, or 4.5 percent of all positive cases.

The latest figures bring the overall total of positive cases in Wisconsin to 354,676, according to DHS. A total of 3,005 people in Wisconsin have died from COVID-19.

COVID-19 activity designations are based on the number of new cases per a county's population over a 14-day period, as well as whether there’s an upward or downward trend in new cases.

Wisconsin's daily testing capacity — based on the availability of test supplies and adequate staffing — has grown from 120 available lab tests in early March to 59,235 as of Sunday. The number of actual people with new test results reported Sunday was 14,899.