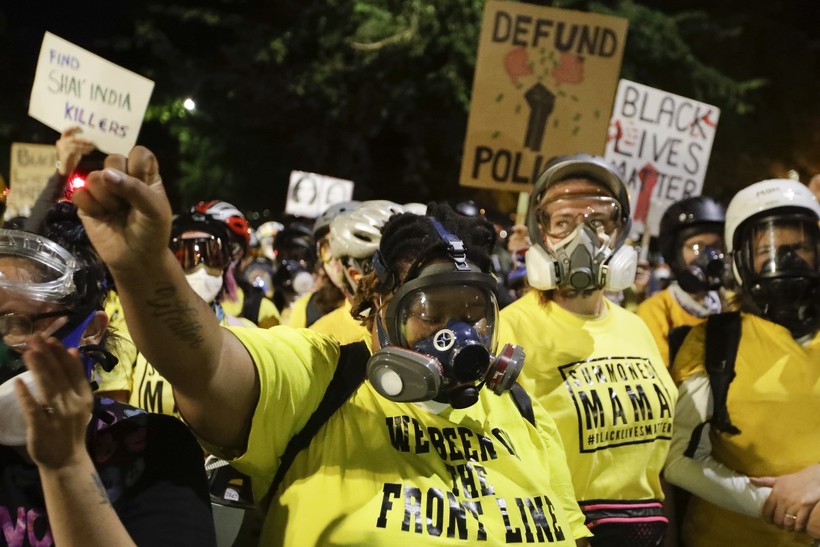 Moms Have Historically Played A Role In Protests, But It Has Never Looked Like This

UW-Stevens Point Professor Talks About The History Of Mothers Protesting And Their Influences On Black Lives Matter
By Elizabeth Dohms-Harter
Share:

Mothers have long been engaged in social activism, and most recently have positioned themselves on the front lines of protests in Portland, Ore. and in other major cities across the country. These "Wall of Moms" groups, noted for their lullaby chants and yellow shirts, have served as human barriers protecting protestors from aggressive policing.

Revered as the everyday hero type, a mother's status carries weight that can influence policy in both uplifting and oppressive capacities, said Kelly Wilz, an associate professor of communication at UW-Stevens Point who teaches courses on women and gender studies, modern activism and the #MeToo movement.

Motherhood was levied in the temperance and suffrage movements. Contemporary women used it to underline social movements like Mothers Against Drunk Driving, Moms Demand Action and Million Mom March. Women also used the status to reinforce racist policies like white flight and school segregation. And some men have publicly relied on being married to a woman as an example of their own virtue, Wilz said.

"We just saw this recently with (U.S. Rep.) Ted Yoho calling (U.S. Rep.) Alexandria Ocasio Cortez an (expletive) and then later apologizing for that by mentioning that he has a wife and two daughters, as if that was some sort of justification for how he was actually an ally to women," Wilz said.

The recent string of mothers banding together to protect traditionally marginalized groups, however, isn't something that's been seen before. Wilz talks about the influences mothers can have in the political and social domains in an interview on "Central Time" with Kealey Bultena.

The following has been edited for brevity and clarity.

Kealey Bultena: Let's go to Portland then and talk specifically about the wall of moms. How did that change the narrative about Black Lives Matter demonstrations there?

Kelly Wilz: If you look at the coverage of the Wall of Moms, it wasn't until white women were getting tear-gassed that the story actually got picked up. I think it's really important to know that Black mothers have been protesting for more than 50 days before the Wall of Moms story was even noticed.

What's fascinating was how those protesters — we saw moms, dads, veterans — that specifically put to the forefront these valued identities to sort of re-humanize themselves and challenge the idea that Black Lives Matter protesters were just anarchists or antifa or terrorists.

It's definitely harder to justify tear-gassing protesters when they are white mothers singing lullabies versus those other really narrow stereotypes.

I think the effective power of mothers groups singing lullabies and standing before the police themselves really relies on this history, though, of white innocence and the sanctity of white motherhood as that driving force.

KB: Why do politicians — or groups, organizations or causes — why did they bring moms in as part of their identities?

KW: Part of it is the humanizing aspect. But we should be clear that it's a specific type of motherhood that can potentially lend credence to political activism due to the ways in which we societally valorize mothers.

But single moms, fat mothers, LGBTQ mothers, Black mothers, do not get the same level of reverence from mainstream institutions as attractive, white, straight moms.

So, if it's that "right" type of motherhood, that can add value to a political campaign because it humanizes it and because it shows that there is this demographic of people who are supporting them that we, as a society, value.

KB: How have we seen mothers in the past mobilize around their motherly identities for policies that, well, we now know are wrong?

KW: In the 1920s, for example, a lot of white mothers would police the areas where public and private life intersected.

Midwives classified the race of babies they delivered. We had public school teachers actually taking students who were suspected of being mixed race out of their classrooms. And they invoked their identity as mothers to elevate their supposedly moral opposition to integration and really distinguish themselves from open bigotry.

But again, they played a really large part in terms of segregation, in terms of Jim Crow laws. Some of them even used baby strollers to block buses that were meant to take children to integrated schools. That's a history that we tend to not really be aware of. It's not right in our public schools. But that was really part of that time.

KB: To some extent, the Wall of Moms were recognizing their privilege, putting themselves between the protesters and the federal agents sent to Portland. Where does that acknowledgment of power and then the use of it fit into the history of motherhood and activism?

KW: It is a good thing that white mothers are putting their bodies on the line for Black Lives Matter.

There's a rich history of women's movements, even the 1960s, wanting their movement to be taken seriously and leaving out members of different groups. For example, in the 1960s, feminist Betty Friedan was not a fan of having lesbians in the movement. She called them the lavender menace.

There is a history of feminists wanting their moment to be taken seriously and in doing so, alienating and oppressing people who weren't white or straight in these privileged categories. It's important that in this moment, white moms are trying to shift that power and allow Black mothers to lead, but also put their lives on the line, recognizing their privilege.

That's a difference that we haven't seen before in terms of putting their lives and their bodies ahead of these other groups who've been historically marginalized.

The History Of Moms In Movements 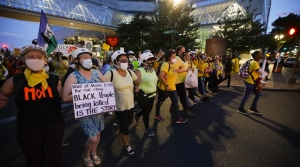 A group of women calling themselves the "Wall of Moms" locked arms and created a human barrier between police and protestors in Portland, Oregon during Black Lives Matter demonstrations. We discuss the history of moms in movements and explore why fronting the identity is effective. We also examine societal contradictions of valorizing mothers.