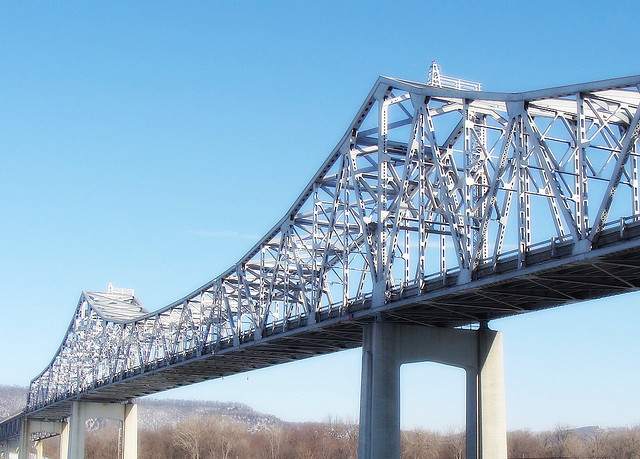 The Minnesota Department of Transportation has recommended that a second Winona Bridge be built while the existing one is under construction. The new bridge would allow traffic to continue flowing across the Mississippi River. Businesses on both sides of the river are happy with the proposal.

Fountain City is a quaint, Wisconsin river town a few miles north of Winona. Gwen Katula is a resident and owner of a business that specializes in lefse, a Norwegian flatbread. She says her area is popular destination for Minneapolis day-trippers. Many of those tourists get to Fountain City via Winona. "A great majority of my business is tourist traffic. If that bridge were not there, it would definitely impact my business."

Katula says, when the Winona Bridge has closed in the past, traffic slows down in her community. She is happy MnDOT has recommended building a second bridge to allow traffic to flow while the existing bridge is rehabbed.

In 2008, the Winona Bridge closed for 10 days. Winona Area Chamber of Commerce president Della Schmidt says after the closure, they surveyed the top 20 businesses in the area. She says, "The 10 day closure had a $2.1 million negative impact on business' bottom line."

Schmidt adds that building a second bridge could help area manufacturers and shippers. "To have this improved and increased and higher capacity bridge crossing is going to give us opportunities, I think on both the Minnesota and Wisconsin side of the river, for additional economic and job creation in the future."

About 2500 Wisconsinites work in Winona County, with most from Trempealeau and Buffalo Counties. Without the bridge, a 10-minute drive could take more than an hour.