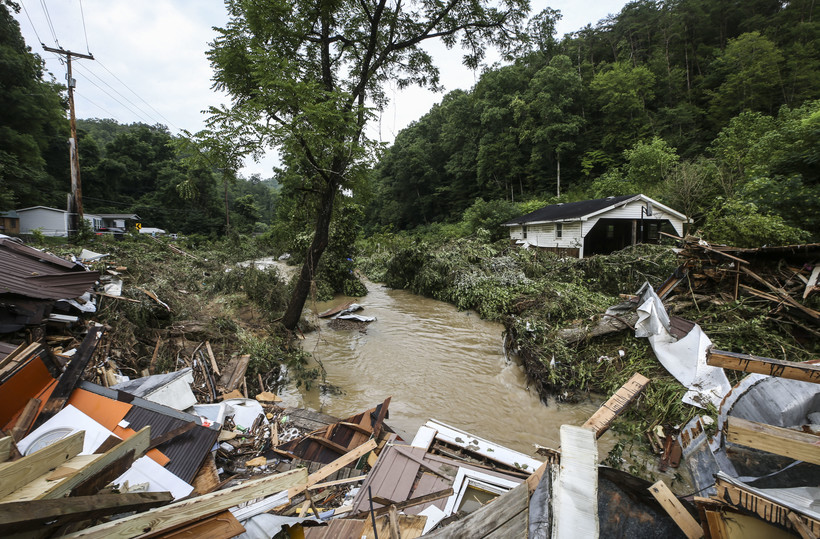 Debris from destroyed homes piles up near a concrete bridge over Grapevine Creek in Perry County after torrential rain caused flash flooding in Eastern Kentucky on July 28, 2022. Matt Stone/The Courier-Journal

The Mississippi River basin is getting wetter as climate change brings era of extreme rain, floods

In the early morning hours of July 26, many St. Louis-area residents awoke to floodwater filling their homes, or to the din of blaring car alarms from vehicles getting overtaken by murky brown water. Too much rain was falling far too fast.

The weather system dumped more than 9 inches on St. Louis — about a quarter of the city’s annual average — compressed largely within a few hours. That same week, torrential rain storms settled on Eastern Kentucky, where up to 16 inches fell and water rushed into people’s homes so swiftly that many didn’t get out in time.

Longtime residents in both regions, no strangers to severe storms and flooding, said they’d seen nothing like it before — and they’re right. 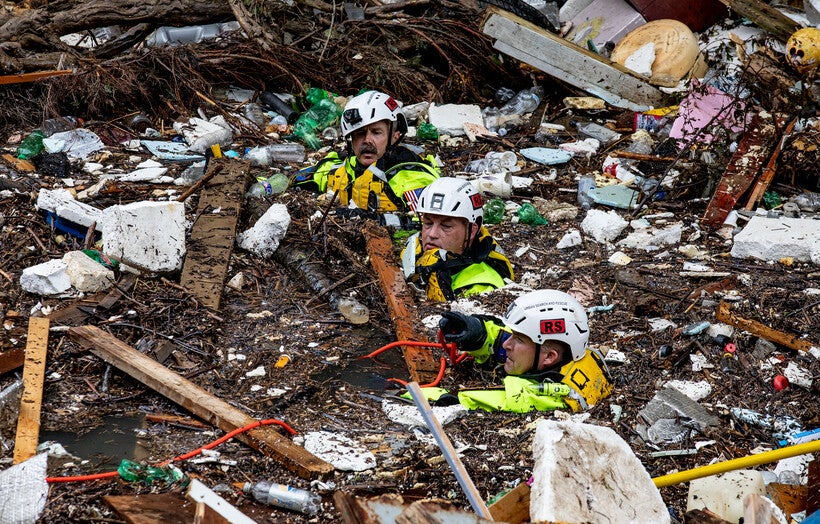 A search and rescue team wades through Troublesome Creek in Eastern Kentucky, searching for flood victims in an area jumbled with debris on July 31, 2022. Jeff Faughender/The Courier-Journal

The rainfall totals obliterated previous records in each area by a margin that was difficult for some experts to fathom — topping St. Louis’ single-day record by more than two inches, for instance. It was yet another example that rain isn’t falling the way that it used to, with both the magnitude and intensity of extreme rain events increasing throughout recent decades, across a large part of the country.

The late-July storms that devastated St. Louis and Eastern Kentucky helped showcase the risks wrought by a climate that is growing hotter and wetter — and more prone to dumping massive rains and flash flooding on communities whose creeks, streams and drainage systems are not equipped to handle such volatile waters.

"We are not doing enough. This last flood sure proves it," said Bob Criss, a Washington University emeritus professor who studies regional flooding. "This problem is not going to get better. We’ve got to make it better."

'More fuel to work with'

Findings showed that the eastern half of the U.S. is getting far wetter on average, with some areas — including parts of the Mississippi River Basin — now receiving up to 8 more inches of rain each year than 50 years ago, based on data from the National Weather Service and the National Oceanic and Atmospheric Administration.

And when it rains, it pours, based on data on rainfall intensity. In other words, not only is more rain falling, but it’s also falling harder in many places, like St. Louis, according to further analysis from Climate Central. 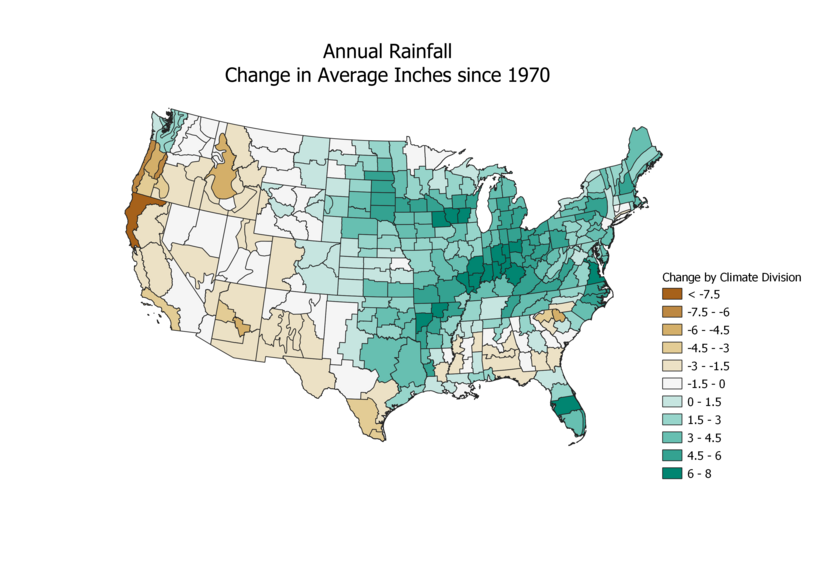 The trend is largely tied to heat. As greenhouse gases from fossil fuels heat the Earth, that warming extends to the oceans and the Gulf of Mexico — a primary source of the atmospheric moisture for the Eastern U.S. Warming oceans produce more water vapor, and a warming atmosphere can hold more moisture, which can then deliver more precipitation in short windows of time.

"We're getting warmer and we're getting wetter," said Pat Guinan, Missouri’s state climatologist and a professor at the University of Missouri. "We are in an unprecedented wet period."

Recent decades have given rise to a stark divide seen across the continental U.S., with the western half of the country becoming increasingly arid and prone to drought, while the eastern half is faced with exceptional moisture, often delivered in bursts.

The Midwest is one region absorbing the brunt of all that water. Since 1958, the Midwest has seen a 42 percent increase in the amount of precipitation that falls during the most extreme events, said Ken Kunkel, a professor at North Carolina State University who studies extreme rainfall and is a lead scientist behind the National Climate Assessment.

"The future will be characterized by more extreme events, simply because our source of water vapor will be hotter," said Kunkel. "The system will have more fuel to work with."

That helps drive risks of high water even in certain places set apart from increasingly flood-prone major rivers, with widespread flash flooding as a separate — and in some ways greater — danger.

"At this point, no community in the country is safeguarded from flooding," said Laura Lightbody, director of the Pew Charitable Trusts’ flood-prepared communities project. "We're seeing it flood in more places than ever expected before."

Flash flood risk is shaped by more than weather alone. Pavement-heavy urban areas and places with constricted rivers or hilly topography compound the threat and are especially vulnerable.

Around St. Louis, even an inch and a half of rain in an hour can trigger localized flash flooding, with small urban tributaries reacting to rainfall far faster and more dramatically than the region’s major rivers. In St. Louis County, for example, creeks can rise as much as 10 feet in an hour.

Meanwhile, in one Appalachian town, the North Fork Kentucky River shattered its previous height record by more than six feet in July’s flooding, rushing in fast enough to destroy the U.S. Geological Survey sensor designed to monitor the river.

That explosiveness means flash floods can present a far more sudden threat to people and property than the gradual rise of rivers carrying water collected from afar.

"You can get caught by rapidly rising water, and it's hard to anticipate," Kunkel said.

Flash floods have received “extensive” help — becoming even more dangerous — in many densely developed and heavily populated urban settings, say other experts, like Criss, who has shifted his research focus more toward flash floods, in recent years.

Such flood risks can vary widely from place to place, but can be especially pronounced in small, "flashy" watersheds that are unusually sensitive to bursts of incoming water. One of the epicenters of damage near St. Louis, for example, occurred along the upper stretches of the River Des Peres, a highly urbanized waterway that experts like Criss have identified as the most flash flood-prone system in Missouri, and have long voiced concerns over. 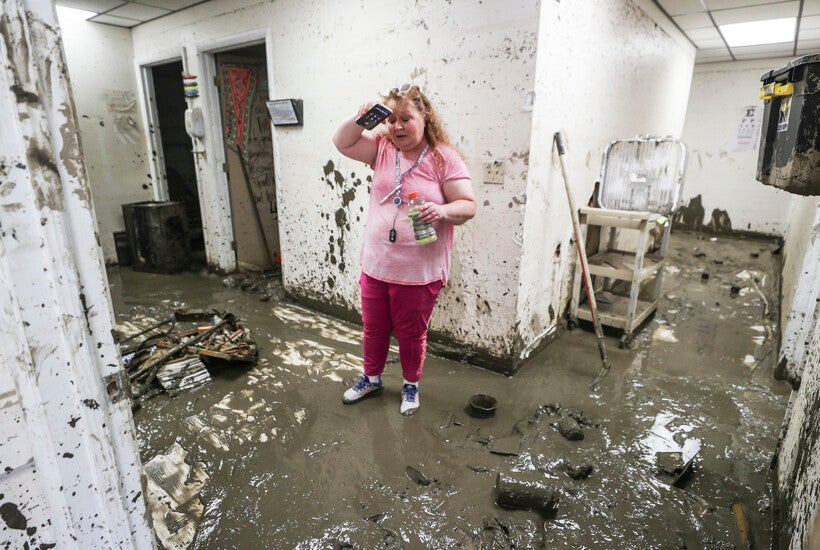 Dr. Brenda Baker talks with an insurance company inside the muddy remains of her medical practice in the tiny town of Neon, Ky. "We've lost everything," said Baker, who treated patients in a nearby school after floods in July 2022 filled her office with nine feet of water. Matt Stone/The Courier-Journal

The river essentially acts as an urban drainage ditch, converted largely into a straightened concrete sleeve that can be easily overwhelmed with water funneled its way during storms — delivered more quickly and plentifully by all the surrounding pavement and other impervious surfaces.

"Intense rainfall is just making it all the worse," said Criss. "(But) I don’t want to just blame the weather all the time. That makes it like we’re not responsible. ... There is plenty we can do in our local communities to improve the way we build and treat our creeks."

Some similar risk factors are at play in rural Appalachia — another epicenter of this summer’s flood damage. There, rugged terrain leaves homes to be built almost exclusively along rivers and at the foot of mountains. Water travels quickly along the steep slopes to the residents below.

The region’s history of strip mining and mountaintop removal also contributes to the danger, since the damaged land is often unable to soak in water as it naturally would. Even remediated mine lands often consist of compacted soil and grass, which aren’t nearly as effective for flood mitigation as the forest that once occupied the land.

"It’s like pouring water on a tabletop," explained Mary Cromer, of the Appalachian Citizens’ Law Center, who recently sat before members of Congress and painted the destructive picture of the flooding that put the law center and most of her town of Whitesburg under water.

More rainfall presents urgent challenges and imperatives: How can a city retool the built environment to withstand stronger flooding? How do people get out of harm’s way? 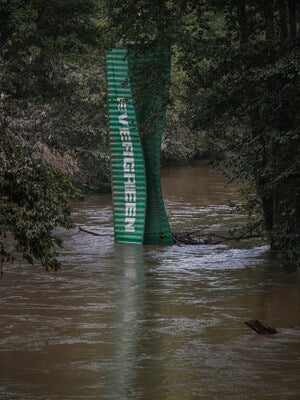 Most existing structures were built to withstand conditions and expectations based on what used to happen — not the climate trends happening today, nor future projections.

"Historical data is no longer a good predictor of the future," Kunkel said. As a result, he adds that, "we’re not building things to the level of resilience that we’d expect."

In freshly flooded places around the U.S., various forms of recovery are underway — a process that could take a long time.

In Kentucky, residents were told to expect years of rebuilding. But some, like Cromer, point to the continued threat posed by climate change — giving the difficult rebuild the grim possibility of becoming a Sisyphean task, poised to repeat itself, unless certain changes and precautions go into place.

"We know flooding like this will happen again," she said.

This story is part of When it Rains, a special series from the Mississippi River Basin Ag & Water Desk, an editorially independent reporting network based at the University of Missouri School of Journalism in partnership with Report For America and the Society of Environmental Journalists, funded by the Walton Family Foundation.