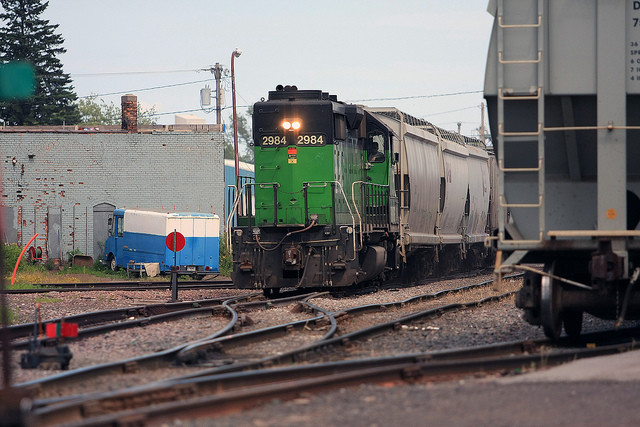 There is currently no passenger rail to Superior. Only freight trains operate on the BNSF track that runs through the city. Photo: Adam Stromquist (CC-BY-ND).

Minnesota transportation officials are in Superior this week to talk about the possibility of high-speed rail coming to the Twin Ports.

The Northern Lights Express would run along existing BNSF railway track from the Twin Cities to Hinckley, Minnesota, at which point it would cross the border into Wisconsin and stop in Superior and Duluth.

“Exposing people to Superior and getting them to get out of the train, see Superior, essentially spend money, is something we see as beneficial,” he said. Above, the two proposed sites for a passenger rail station in Superior.

Serck said the Minnesota Department of Transportation is proposing two possible locations for a station in Superior. Both locations are zoned commercial or manufacturing. There are a few property owners located at the proposed sites, but no homeowners would be affected by the project.

Serck said they’ve been talking with landowners about the potential for high-speed rail.

“Surprisingly, most of them are like, ‘Hey, this is great.’ They’re looking to potentially sell,” said Serck. “There’s some opportunities there.”

Serck said they’re examining all options if a station is built.

“We’re going to have to look at our needs and see what do we want to have at this site, wherever it is. Do we want to provide some retail possibilities? Those types of questions,” he said.

Wisconsin’s Department of Transportation is working with Minnesota as needed on the plan. The project would go through the Office of Commissioner of Railroads if any changes are made to Wisconsin rail crossings. Anna Davey, northwest regional rail coordinator for Wisconsin DOT, said they’re providing input on timelines for the OCR process and working with MnDOT and the community. She said changes that go through the OCR may take anywhere from six to nine months, depending on the scope of the project.

“This is a MnDOT project, and we’re providing support where needed,” Davey said.

The plan’s project manager Dave Christianson said the Northern Lights Express could carry more than a million riders per year along 155 miles of existing BNSF track. He also said it may cost up to $1 billion to build in the Twin Ports.

“About 30,000 riders a year would probably come out of Superior. It would be up to Douglas County and the city of Superior to develop the station,” he said.

Christianson said they’re looking mostly for federal dollars and seeking congressional support for the project. In 2009, Minnesota passed a $26 million bonding bill for passenger rail development, which provided $3 million for NLX. MnDOT is set to apply for more state bonding this year.

The proposal is part of Minnesota’s draft statewide rail plan.