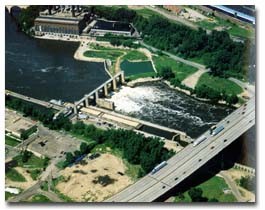 As part of a nationwide cost-saving plan, the Army Corps of Engineers may close Minneapolis’s Mississippi River locks in the middle of the night.

Upper and Lower St. Anthony Falls Locks and Dams and Lock and Dam 1 may close from 2-7am next year.

Army Corps of Engineers officials say shutting down each night would save them $770,000 annually. That money would go towards the huge backlog of maintenance projects across the country.

Kevin Baumgard is the deputy chief of operations in the Corps of Engineers’ St. Paul District. He says the cutbacks will hopefully extend the locks’ service lives, “Our locks and dams here in our stretch in the St. Paul District, they’re all over 70 years old, certainly past their design lives. That trend is similar across the Corps’. A lot of our facilities were built in the 30s and they’re just reaching their design life and are going to need some major maintenance to keep them serviceable.”

Baumgard says they’re not looking at reducing hours at any other Mississippi River locks.

Upper Mississippi Waterway Association Vice President Greg Genz says the shipping industry won’t be affected much, but some businesses will have to make changes. He says if commercial traffic picks up in the Minneapolis area, he's been assured that the locks would be open around the clock, “The Corps of Engineers is a glacially moving entity. Just for them to make this change is a big deal. We want to make sure that if needs are such that we have to increase our activity up there, that we have the ability to do that. Again, they’ve assured us of that.”

The Corps of Engineers is taking public comments through August.