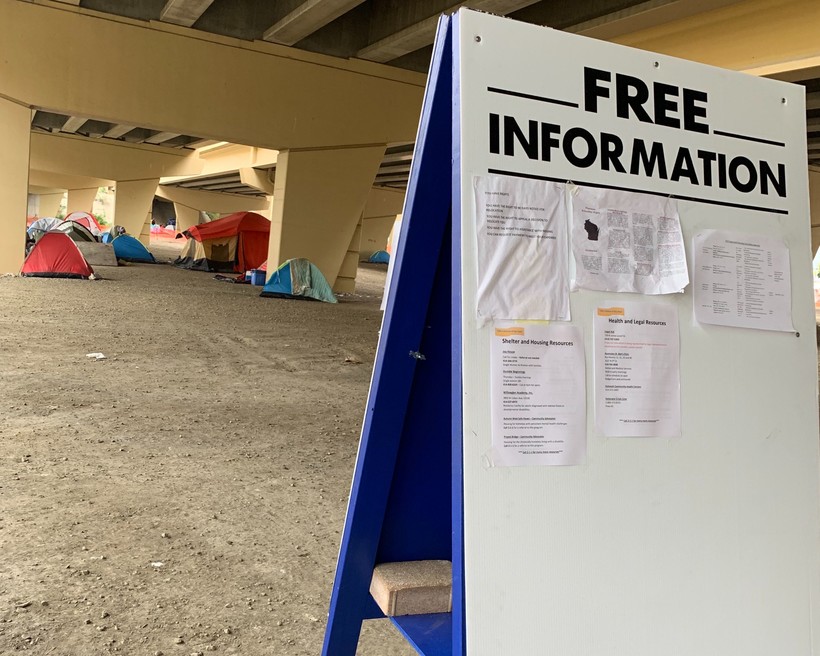 An easel sits under the Marquette Interchange where Milwaukee County and other non-profits post information about services for homeless residents on October 24, 2019. Alana Watson, WPR

Milwaukee's Homeless Encampment Is Ending To Make Room For Development

Residents Were Served An Eviction Notice In October, But Some Are Hesitant To Leave
By Alana Watson
Share:

Under one of Milwaukee's major interstates and near high-traffic exit ramps, dozens of the city's homeless residents have created dwellings out of tents and tarps, held down with rocks and other objects.

The encampment, know as "Tent City," is coming to an end. State transportation officials have asked residents to leave. But recently, more than 20 tents were still there covered in snow.

Tent City has been a part of Milwaukee for at least two years. There have been up to 80 people of different ages and races living there at times, and nonprofit organizations and others provide services like meals, showers, toiletries, bus passes and even money.

"There's a lot of good-hearted people in Milwaukee and it's really kind of heartwarming to see because everyone is dropping off materials and things down there," Pyritz said. "The problem is, it's not helping."

That's why the department posted a letter in October letting residents know they would be evicted from under the interchange. According to Pyritz, this was the first time the state has been involved getting people to leave the homeless encampment.

"You can not camp on a Wisconsin Department of Transportation right of way," Pyritz explained. "Clearly, all that land along (Interstate) 794 is part of the interstate's right of way." 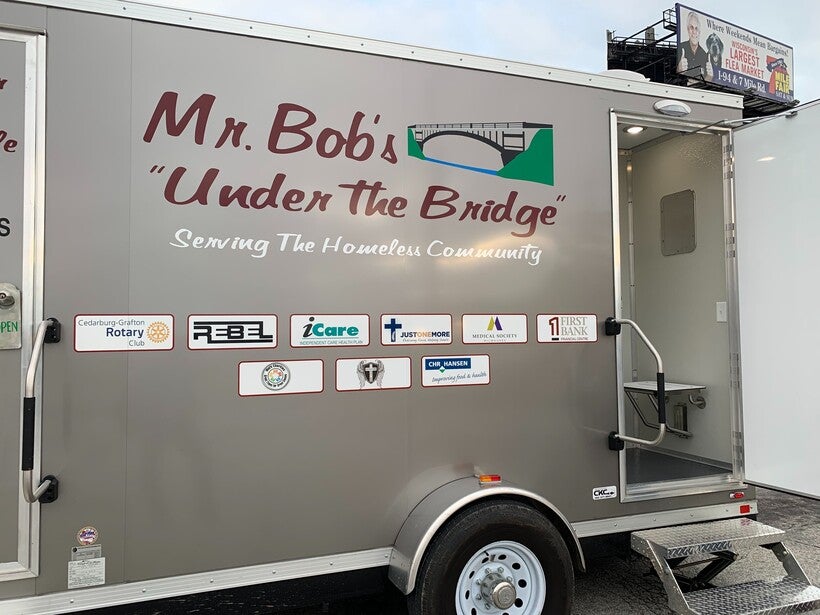 Mr. Bob's "Under the Bridge" mobile shower trailer has been providing residents with a warm place to shower for the past three months. Mr. Bob comes out to Milwaukee's homeless encampment every Thursday. This photo was taken on Oct. 24, 2019. Alana Watson/WPR

Milwaukee county, the state, and even a few residents of Tent City have concerns of drug use and violence in the encampment. But Pyritz said the department got involved because of plans to develop that area.

"We’ve been looking for opportunities along the 794 corridor to do projects that will help with connectivity and improve the corridor over all," Pyritz said.

Some of those opportunities include a dog park, a potential farmers market, and water treatment infrastructure that the city of Milwaukee have been working on for years.

The state gave Tent City residents until the end of October to relocate, but pushed the deadline back because over 20 people were still living under the interchange.

A man who goes by AJ said he was staying in the encampment for a few days until he boarded a train to Minneapolis. He said that he has traveled all over the U.S. and is originally from Chicago. He is staying on an old couch with a fire burning close to him.

"Honestly, I don't know why they care more about this scorched piece of land under here, this piece of dirt under here, more than the people themselves," AJ said, as he described his frustrations.

He said that most people living in the encampment are trying to escape the real world, and they've made a home under the highway.

Milwaukee County officials said that they have been pushing to get people housing before winter.

"Milwaukee’s not going to force individuals to go to a homeless shelter. Folks are very shelter resistant," said James Mathy, with the county's housing division. He continued to say that the county's focus is on getting people into permanent housing.

"Housing is the only way to end homelessness, so we are really looking for the community to embrace that mission and look at how they can support individuals, permanently ending their homelessness through housing," Mathy said.

But that's no small task. Almost 5,000 people were homeless at any given time in Wisconsin last year, according to federal estimates. Milwaukee has roughly 900 people currently homeless.

With winter arriving early, AJ said there are people who will stay through the cold nights and snow rather than go to a shelter or a warming center.

There’s no official date on when people have to relocate from Tent City and it’s unclear how the county or state plans to keep people from coming back.