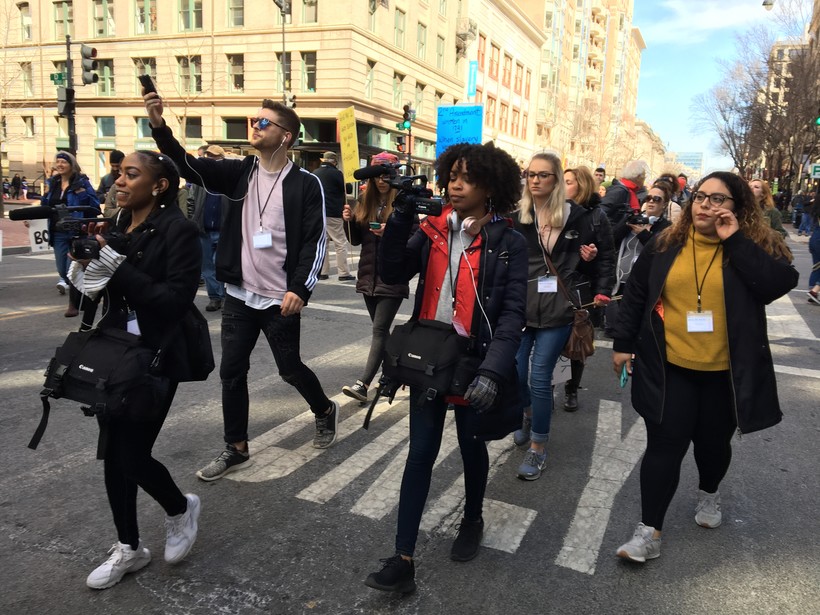 Twelve journalism students from the University of Wisconsin-Milwaukee traveled 17 hours by train to Washington and spent the weekend covering the March For Our Lives inspired by survivors of the February school shooting in Parkland, Florida.

In an atmosphere charged with emotion and activism, one challenge for the students was objectivity — how to handle their own opinions about guns as a revitalized movement led by young people appears to take hold.

"This is definitely a really good practice run on learning to separate my own views from the story," said UWM student Henry Morgan.

"It’s really difficult to be objective because I think it’s exciting to see people our age really standing up and making a difference," she said. "People constantly say we don’t care and we don’t pay attention."

UWM student Morgan Langley was planning to interview humanitarian groups at the march.

"There’s a lot of pressure to report it well, report it accurately, get people’s stories out there and set our stories apart from others," said Langley.

The Wisconsin students arrived in Washington the day before the march and fanned out across the city. At a brick Colonial home in an upscale D.C. neighborhood, they interviewed seven Parkland students spending the weekend with area high schoolers. The home-stays were organized by March for our Lives Lodging, which tapped local parent networks to find beds for visiting students.

At a downtown office building, UWM reporters found Parkland families making signs in preparation for the march. Jessica Lopez interviewed the mother of a boy who survived the school shooting. She reached the school in time to see bloodied children running out the doors. Her son was safe, but her neighbor’s daughter was dead.

"I could see her eyes were getting watery and getting choked up," said Lopez. "And I couldn’t help but to get that way, too, but I knew that I had to keep it together because I’m there to interview her." UWM student journalist Sydney Ewert interviews a protester and her son at the march. ane Hampden/WPR

On Saturday morning, the Milwaukee students walked 2 miles from their hotel to Pennsylvania Ave. with cameras, audio recorders and notebooks. They joined rivers of marchers flowing toward the Capitol and interviewed veterans, counter-protesters, children and senior citizens.

Hunter Hanthorn was determined to keep his feelings in check, but when he saw the image of Parkland student Emma Gonzalez on the giant screens along Pennsylvania Ave., he brushed away tears.

"Every time she speaks you can just feel that emotion in her voice and I felt as if that emotion was being projected right onto me," Hanthorn said.

"All the young people involved, they all had something to say," said UWM student Sydney Ewert. "They were so willing to share it because they feel so strongly."

After the march, three of the Milwaukee students and an instructor drove to Virginia to visit a gun show in Manassas, interview residents about gun rights and learn about gun owners' views on proposed regulation. Students talked with young Trump voters, a church deacon, shoppers at a local Dollar General store, and gun show vendors. Many supported tougher background checks and restrictions on the sale of automatic weapons. "I was kind of disappointed in myself for thinking I would see the stereotypes that ended up not being there," said student reporter Sloan Sullivan. "Being able to talk to people, pro-gun and anti-gun, changed my beliefs."

On Sunday, back on the train for the overnight trip to Chicago, the team stayed up late, logging audio and video and writing stories for their news site, Media Milwaukee. The series will be published later this week.

The reporting trip was funded in part by a grant from the Greater Milwaukee Foundation/Journal Sentinel Foundation Walter Jay and Clara Charlotte Damm Fund.