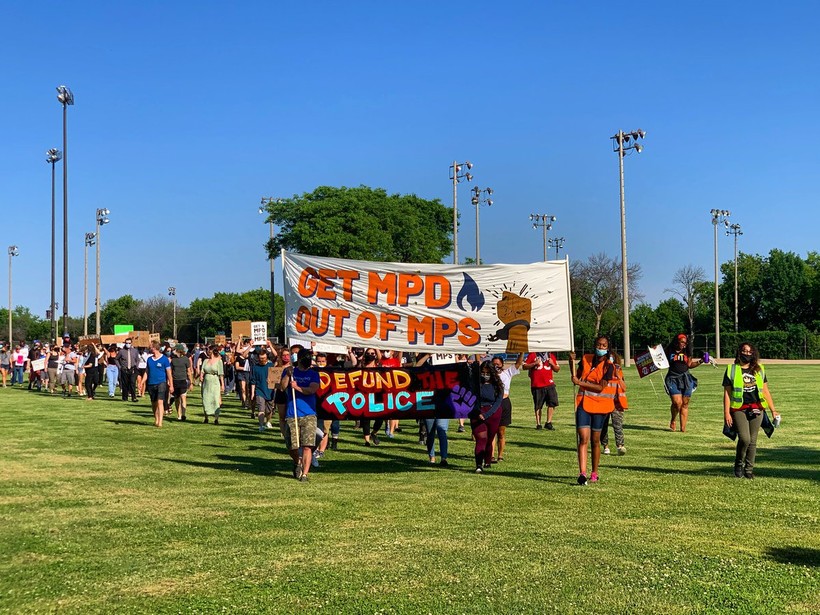 Students and supporters march in a demonstration organized by the group Leaders Igniting Transformation and advocating for Milwaukee Public Schools to terminate its contract with the Milwaukee Police Department and put the funds toward counselors, restorative justice training and other priorities. Amanda Avalos/Courtesy of Leaders Igniting Transformation

Black students are far more likely to be suspended or expelled, as are students with disabilities
By Madeline Fox
Share:

Black students at Milwaukee Public Schools continue to be disciplined at a disproportionate rate, even after a federal civil rights investigation into the differences, according to a recent report.

A new report from the national progressive nonprofit Center for Popular Democracy and the Wisconsin-based youth advocacy group Leaders Igniting Transformation found today, suspension disparities are even higher — 32 percent higher than the share of Black students — and expulsion disparities have dropped only slightly, to a 22 percent difference. White students, meanwhile, are 10 percent of the student body, 3 percent of suspensions and 5 percent of expulsions.

"This all has been going on for quite a while, so I don’t know if it’s surprising, but the term I would use is 'shocking,'" said study co-author Marc Rodrigues, with the Center for Popular Democracy. "There’s just a shocking amount of consistency and continuity in what’s going on at MPS — you would think that by now, more would have been done to address that."

Additionally, the report highlighted discipline for "subjective behaviors" — things like disorderly conduct and inappropriate use of electronics and personal property. Black students made up 79 percent of disciplinary referrals for those behaviors in the 2019-20 school year, and tended to get harsher punishments.

It's something MPS junior Antonio Moore said he sees in schools.

"I noticed that the punishments were a little more harsh," he said. "You can get suspended very quickly, very quickly, for anything. You could be walking in the hallways and they feel like you don’t get to your classes when they want to — hey, suspension."

The report draws a line from school discipline to incarceration or deportation. Studies show that once students are suspended, they’re more likely to be arrested and incarcerated as adults, or, if their legal residency in the United States is precarious, to be referred to immigration and deported. Wisconsin schools referred students to police at the fourth-highest rate in the nation in 2017-18 school year — nine students out of every 1,000, compared to a national rate of 4.5 per 1,000.

But even before discipline reaches that point, it can have a profound effect on students’ feelings of safety and belonging in schools, which can affect their ability to learn.

Antonio has moved around a lot. When he was in grade school in Rockford, Illinois, he experienced unequal discipline firsthand. A white student threatened to break his face, and Antonio, who is Black, said something like, "You try it and I’ll break your neck," he said. When the other boy told his mom, she took it to the principal.

"I felt like an outsider. I felt alone at that point," he said. "That hurt me, and ever since then, I’ve looked at school kind of different. I’d never gotten treated like that before."

The report’s authors point to a number of steps MPS can take to lessen the disparities that have worked in other school systems. It outlines the Leaders Igniting Transformation "Youth Power Agenda," which calls for robust restorative justice practices in schools, culturally competent support professionals, training for school staff and smaller class sizes.

"If you want to see a shift in these disparities, you need to shift the overall culture of the schools, and really transform how you’re interacting with young people," said study co-author Kate Terenzi.

Antonio said there are also steps the schools can take to make students feel supported and cared for. He said he wants to see better school lunches so kids aren’t going home or to after-school jobs hungry, punishment options that are less harsh than suspension, more school supplies available so students aren’t punished for not being prepared, and more motivational practices.

Rodrigues, the other study author, said the growing disparities in suspensions since the Office of Civil Rights investigation a decade ago show MPS needs to make changes as soon as possible.

"What we’ve seen so far is this unbroken pattern of these disparities," he said. "This pattern of excluding young people from the learning environment and setting them up for really negative consequences, not only academically, but in their lives overall, I think that’s going to continue."