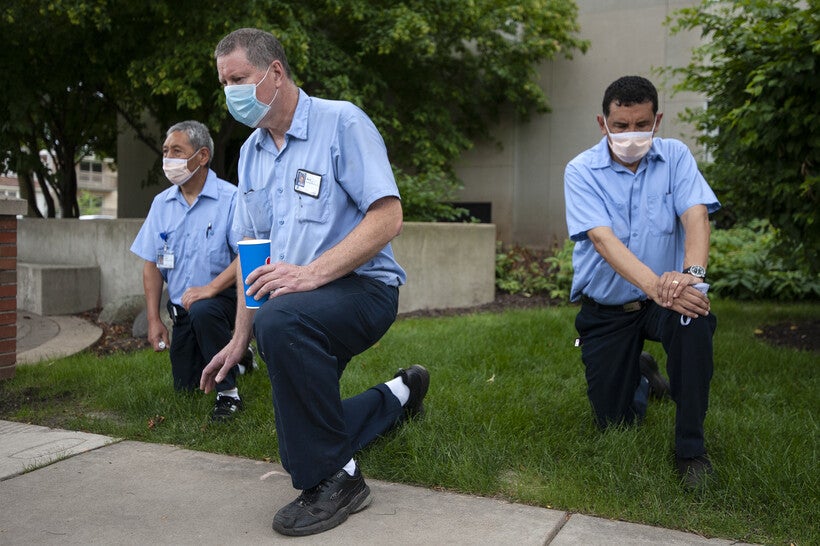 Attendees kneel during the Strike for Black Lives on Monday, July 20, 2020, in Madison. Angela Major/WPR

Workers Of Color Call For Living Wage And The Ability To Unionize
By Rachael Vasquez
Share:

Workers in Milwaukee and Madison joined nationwide protests Monday over systemic racism in the economy, workplaces and policing.

In Milwaukee, organizers estimate close to 200 marched and rallied outside a McDonald's restaurant where workers walked off the job.

Wanda Lavender, the manager of a Popeye's restaurant in Milwaukee and a lead activist with The Fight For $15 and a Union in Wisconsin, said workers deserve a living wage and the ability to unionize. She added that racial justice issues are not separate from issues about economic justice for her.

"I have two young sons that are getting ready to come out into the world and the workforce and I want them to receive the same equal pay as a person of non-color to be able to survive and support (their) families when that time comes," Lavender said.

The three events in Madison and Milwaukee were organized by a coalition of unions and racial justice groups, with Service Employees Union International and The Fight for $15 and a Union sponsoring the events. 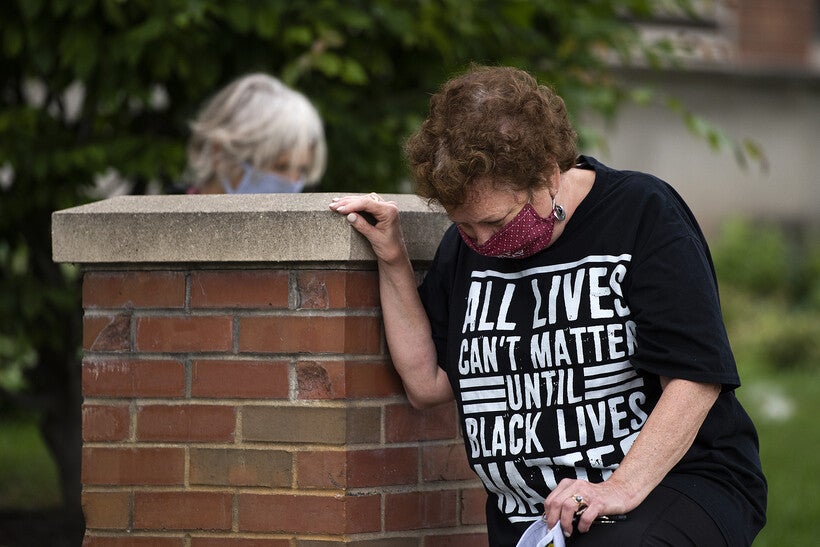 Tracy Suprise, a retired nurse from Madison, kneels in solidarity during the Strike for Black Lives on Monday, July 20, 2020, in Madison. Angela Major/WPR

"Stand strong, and know that you are fighting for more than yourself," Sen. Johnson said to a crowd of hundreds. "And know that in the state Legislature you not only have a fan, you have a sister."

The "Strike for Black Lives" protests were scheduled for more than two dozen cities across the U.S. Monday. Nationally, the events were supported by a wide array of unions, environmental advocates, and racial justice organizations like the International Brotherhood of Teamsters and the Movement for Black Lives.

In Madison, a group of close to 30 nurses and service staff from Meriter Hospital held a solidarity action. Workers gathered on their lunch breaks at the corner of South Park and Chandler Streets and knelt in silence for eight minutes and 46 seconds, the amount of time former Minneapolis police officer Derek Chauvin knelt on the neck of George Floyd on May 25, which resulted in Floyd's death. 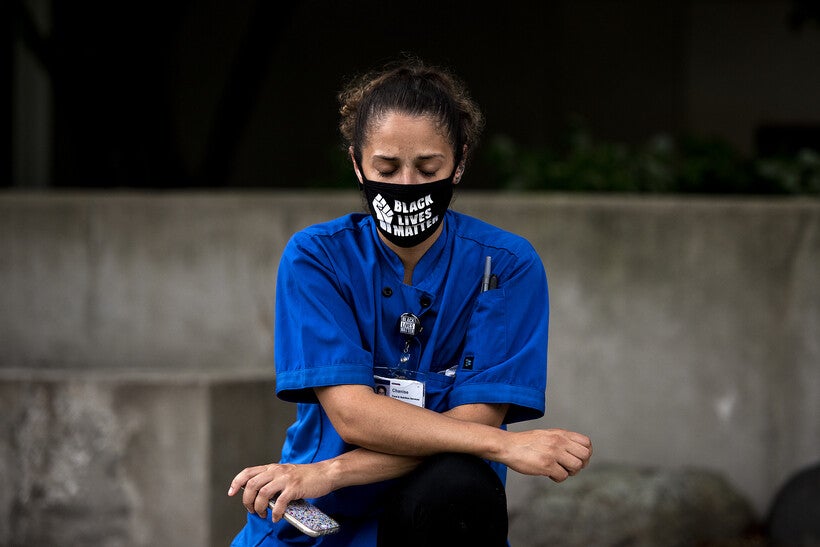 An attendee closes her eyes while kneeling at the Stike for Black Lives on Monday, July 20, 2020, in Madison. Angela Major/WPR

Michael Elvord, a Meriter employee who works in environmental services and is a union representative with SEIU, was brought to tears during the kneeling.

"Sometimes I think about my son — if that was him in that position how terrible that would be," Elvord said. "I think about George Floyd's last eight minutes and 46 seconds and how horrible that was because after about three or four minutes you realize you have a long way to go before eight minutes. That's a long time."

The national coalition called for an "unequivocal declaration that Black Lives Matter," for elected officials and those seeking public office to "reimagine our economy and democracy so that Black communities can thrive," and for corporations to dismantle racism "wherever it exists."

In a statement, Jennifer Berry, a Milwaukee McDonald's worker and an activist in the Fight for $15 and a Union, pushed for corporations to take on a stronger role combating racism.

"There are too many people who go to work every day in our country but ask the same question: how will I survive? This is especially true for Black workers," Berry said. "So when I hear McDonald’s say they support Black Lives Matter, I can’t see it. If companies like McDonald's want to actually support the Black community, they need to pay their workers a living wage and give us a seat at the table in our union."

Elvord said the killing of George Floyd and the organizing that it sparked feels different to him. He said in the past when Black people have been killed by police, he's seen white Americans show a reluctance to accept that killing as unjust.

"Usually there's always, 'he must have done something wrong,' there's always a rush to excuse the police," he said. "This is the first time I ever felt like white America saw what it was."

Elvord added that gave him "a great deal of hope."