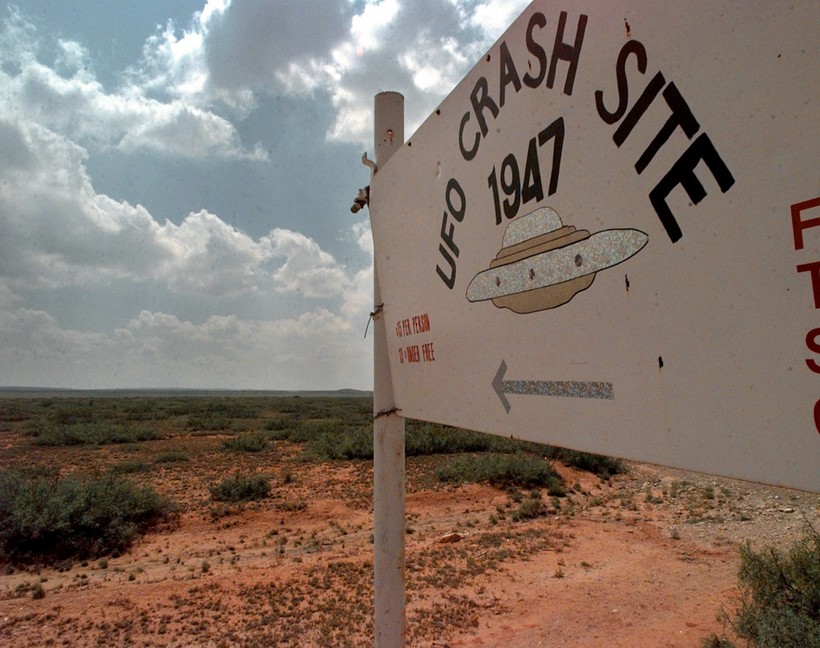 A sign directs travelers to the start of the "1947 UFO Crash Site Tours" in Roswell, New Mexico, in June 1997. In Roswell, locals don't argue anymore about whether a space ship crashed nearby. They argue about whose ranch it landed on. Eric Draper/AP Photo

Mysterious lights in the sky and chance encounters with aliens are business as usually in Dundee, which is known for the annual UFO festival, UFO Daze.

UFO Daze is the subject of a new 19-minute documentary, "The Dundee Project," that chronicles the sights, sounds and curious characters who gather each year for the one-day event near the Kettle Moraine State Forest in Fond du Lac County.

Milwaukee filmmaker Mark Borchardt makes a pilgrimage to this festival each year. In the early 2000s, he filmed interviews with the people who commune at a tavern to discuss all things UFO – and to believe.

Borchardt, who is also a character in the film, explains his fascination in the first-person. He can’t believe this fertile ground of storytelling could be so close to him.

"It was the location of the celebratory gathering that conjured my excitement. For it just so happened to be taking place in my home state of Wisconsin, specifically a place called Dundee. I consulted the charts and realized that it was practically in my own backyard," Borchardt says in the documentary.

The film's co-producer, Andrew Swant, told Wisconsin Public Radio he tried to stay out of the way of Borchardt’s directing and creative vision. Borchardt’s last short film, "Coven," was released 20 years ago.

"You don’t even really know if Mark is a believer or if he’s into UFOs, but you can tell he’s genuinely interested in the people at the festival," Swant said, who accompanied Borchardt for the premiere on Jan. 23 at Slamdance Film Festival in Park City, Utah.

Throughout the film, Borchardt goes back to one character, UFO Bob, who insists he communicates with UFOs via radio waves, and that these extraterrestrials take interest in Packers games, much like regular Wisconsinites.

UFO Bob is a believer, Swant said, but other people are attracted to UFO Daze for the pure curiosity factor.

Swant is still seeking a Wisconsin premiere for "The Dundee Project" and submitting it to festivals.

UFO Daze is set for July 15 at Benson’s Hide-A-Way, Hwy. 67 East, three miles north of Dundee on the northern tip of Long Lake in Campbellsport.