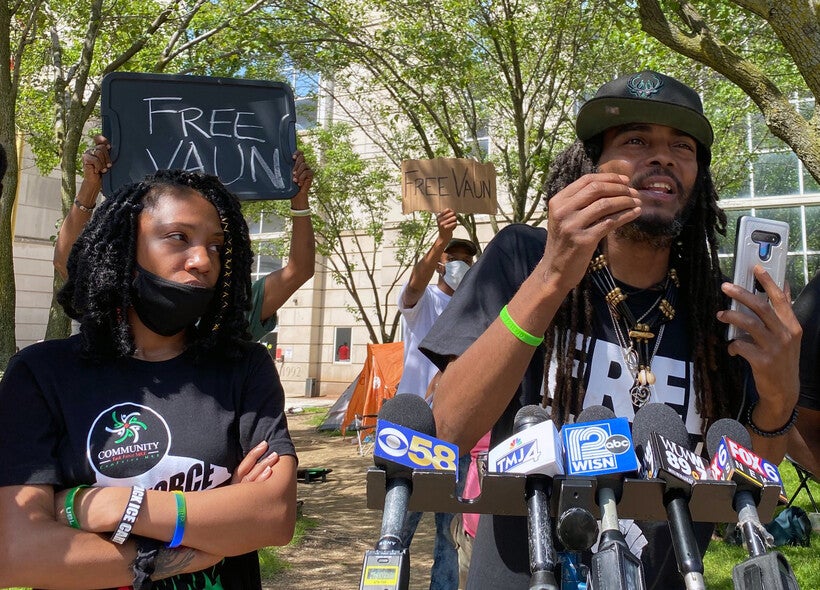 A group of Milwaukee-based Black Lives Matter protesters who are marching to Washington D.C. were shot at Monday night as they crossed through Pennsylvania. Pennsylvania State Police confirmed Tuesday morning in a press release they are investigating the shooting.

In a livestream of the incident shared on Facebook by Milwaukee activist Frank "Nitty" Sensabaugh, multiple gun shots can be heard. The video shows what appear to be two men standing near a street talking to protesters.

After the gunshots, protesters can be heard screaming, with one person seemingly directing protesters who are armed to not return fire. Another protester can be heard in the video saying, "We're leaving, you don't have to get violent."

In the release, police say "gunfire was exchanged, and one activist was struck."

During a press conference Tuesday afternoon, reporters asked authorities if that meant activists had fired any weapons. Capt. Jamie Clark, the commanding officer investigating the incident, said they recovered two firearms at the scene but could not confirm which parties had fired the weapons.

Sandy Soloman, a protester who is part of the march and witnessed the shooting incident, said in an interview that she did not see any protesters fire guns Monday night and could not speak to the question.

Later in the video, a protester can be seen who is bloodied, who says they were shot in the face.

Wisconsin Public Radio has not confirmed the name of the injured protester, but other marchers referred to the man as "Cino." Authorities in Pennsylvania said he has been released from Conemaugh Hospital in Johnstown, Pennsylvania after being treated for non-life threatening injuries.

The encounter between local residents and activists happened in Bedford County, Pennsylvania, according to Pennsylvania State Police.

Soloman said the activists had paused their march while some figured out if they were going to return to Kenosha, a city that's seen large protests in recent days after Kenosha Police shot Jacob Blake, a Black man, in the back. Soloman said the crowd of activists was not doing anything wrong while they gathered and that she couldn't think of what made him start shooting, "except for we were a group of Black people."

"That's what the problem is, and that's why we're marching," Soloman said. "You can't look at a Black person and always assume that if they're in your area where you live that they're up to no good."

Authorities say the local residents involved in the incident are being questioned.

In the Tuesday afternoon press conference, State Police reiterated that they are continuing to gather information and evidence, and the investigation into the incident is ongoing.

The Heritage Affairs Section, a special unit that works on hate and bias related crimes, is assisting State Police with the investigation. In an initial press conference Tuesday morning, authorities stressed that the unit's assistance on the case should not be taken as an indication that they believe a hate crime occurred, adding that they are simply lending guidance on the investigation and interfacing with the group of activists.