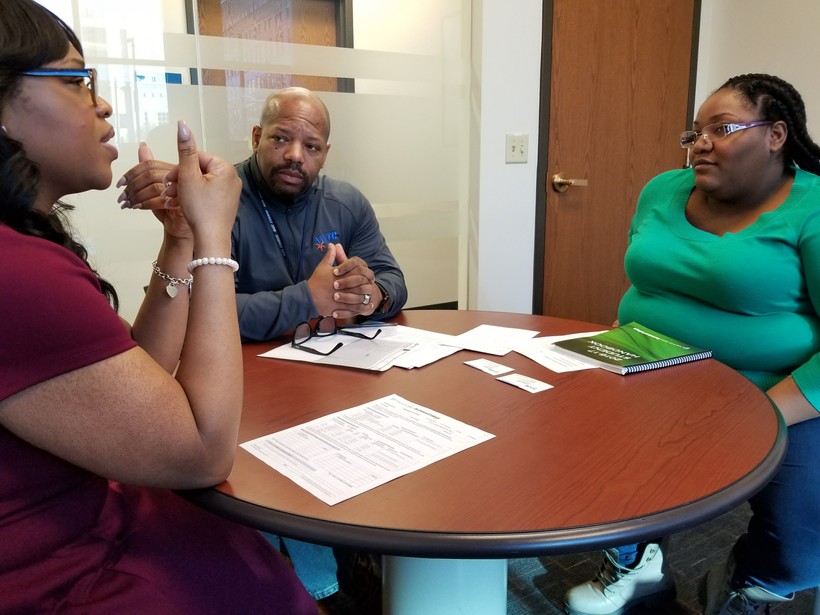 Antoinette Howell's life would look familiar to a lot of community college students.

She’s been going to school part-time on and off for about six years, working toward an associate's degree in business. And she’s seen that classes, like life, can unexpectedly shift from manageable to unmanageable.

"I had my semester where I failed and I had to wait awhile and then come back and I was doing good. And then life happens and I failed another semester," she said

But now, with an 8-month-old daughter giving her a new incentive to finish her degree, Howell is back. And she’s exactly the type of student Milwaukee Area Technical College is trying to reach with a new program called Commit to Complete.

Commit to Complete is what’s called a "promise program," where students that meet certain requirements are guaranteed free tuition for a specific number of semesters.

Programs like this one have proliferated over the last four years. At least 16 states offer statewide programs and many more schools offer local programs, including most of Wisconsin’s technical colleges. But most promise programs, including MATC Promise, are for students coming straight out of high school who enroll in college full-time, a group critics say may not need the most support on college campuses.

Howell was never eligible for MATC Promise, but now she’s one of 22 students who enrolled through the Commit to Complete pilot. It's for students who have already given college a try. Most applicants have to have at least 24 college credits to be eligible. A full associate’s degree might require about 60 credits. MATC is piloting Commit to Complete this semester with $500,000 private donation. For now, it's focused on students living or working in the city's 53206 zip code

"That’s one of the most economically depressed zip codes in the area and we really wanted to help those students, so we said, 'why don’t we start there,'" said Johnny Craig, MATC's vice president of student services and enrollment.

With unemployment in Wisconsin at historic lows, and the labor market demanding more skilled workers, Craig said the program can fill a need for the state's economy and local families.

"We’re really trying to meet that gap of qualified and skilled workers to make sure they have a credential that they can receive a quality job, a quality opportunity for their family," he said.

Craig said the campus's original promise program has doubled the number of direct-from-high-school students on campus and those students are more likely to stick around for a second year of college compared to others who aren't in the program. He said free tuition may be what lures students to campus — but what keeps them there is support from what he calls a "care team." That’s the kind of support Howell is getting now.

Early in the semester, she met with counselor Rodney McLain.

He asked how she felt coming back to campus and meticulously mapped out her path to graduation by Spring 2019. Just 22 credits, or about two classes a semester for three semesters, are left in Howell’s degree program.

The only stumbling block Howell sees are the two math classes she’ll have to take. That’s when recruitment specialist Amanda Brooks, also sitting in on the meeting, jumped in with something she tells other students.

"I have them go over to tutoring right away" Brooks said. "And they always say 'but the class hasn’t even started yet' but what you said to me is you don’t like this. So, I already know the mindset."

Howell sees how guidance like this could make the difference this time around.

"She’s going to call me throughout the months while I’m in school to make sure I’m on track," she said. "If I could have had that during the semesters that I failed, I don’t think I would have failed those semesters, because I would have had someone to be like: if you need me, I’m here."

Commit to Complete students aren’t getting special services, they’re just being connected with them in a much more deliberate way.

"It’s just knowing the group of students that we were inviting back to school," Brooks said. "We wanted to make sure they understood these services on the front end. That really did help change some minds and encourage a lot of individuals that they can come back and they can complete."

The program is inspiring more than just the students to complete their degrees.

The launch inspired Brooks to enroll in the last three classes she needs to complete her master’s degree in business, and McLain is back to writing the dissertation that stands between him and the doctorate degree he started working on 10 years ago.