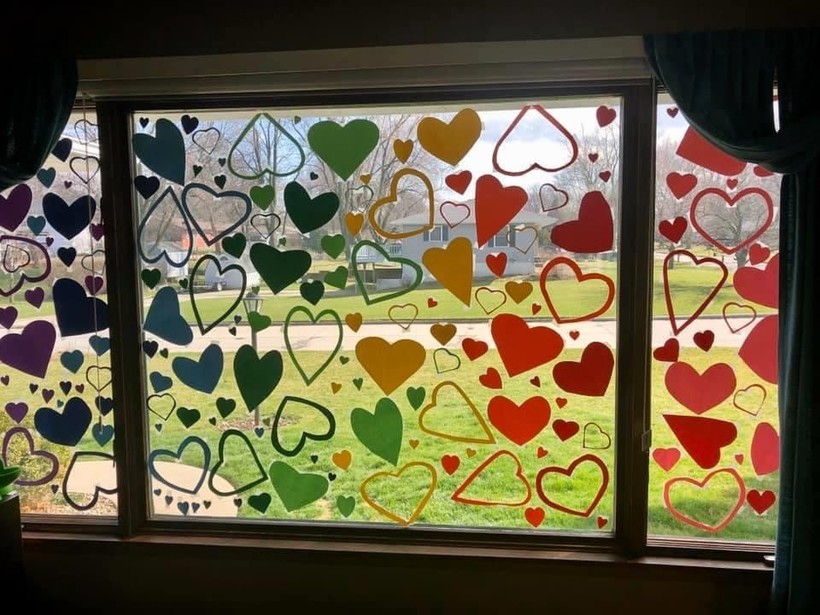 Hearts on a window are on display at a home in Grinnell, Iowa. Photo courtesy of Leslie Brissette

It's been almost a month since Leslie Brissette, a first grade teacher at Milton East Elementary School, started a Facebook page dedicated to sharing pictures of homemade heart-themed creations meant to lift spirits during the COVID-19 pandemic.

Now, it has more than a quarter of a million followers from 99 different countries sharing pictures of the hearts in their windows or around their homes, Brissette estimates.

"Pretty much anywhere you can imagine there's probably a heart in at least one window," she said.

And, in her community of Milton, south of Madison, she continues to see new creations popping up on windows or around people's homes. 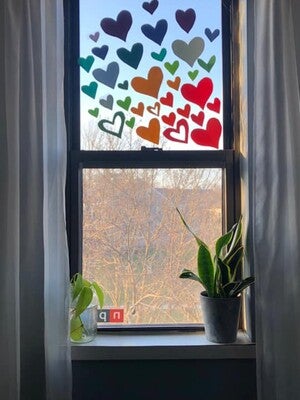 Spreading the love on the Happy Heart Hunt page on Facebook wasn't all Brissette's idea. She'd seen something similar floating around on Facebook and other social media platforms from a few different groups about hanging items in their windows for people to spot while out on walks or drives.

"I thought, 'Why not make a Facebook page so everybody could share together and see what was out there?'" she said.

Brissette created the page March 18. Now, the Facebook feed is filled with thousands of pictures of rainbow-colored hearts covering windows and doors, hearts in straight lines, smaller hearts in the shape of a bigger heart, hearts made out of finger paint and chalk, and even pinecones.

The goal, Brissette said, is to bring everyone together and to give members something uplifting to look at, especially at a time when pandemic scares, depressing news stories and social isolation can be debilitating.

"And also just to show everybody that we're all in this together," Brisette said. "We have things that connect us, even though we're apart right now."

Anyone can participate in the Happy Heart Club.

The rules are simply to create items that somehow incorporate the theme of hearts. Then, use those items to decorate you house, car, sidewalks, workplace, etc. Join the Happy Heart Hunt Facebook page and post pictures of your own creations or what you see in your neighborhoods. 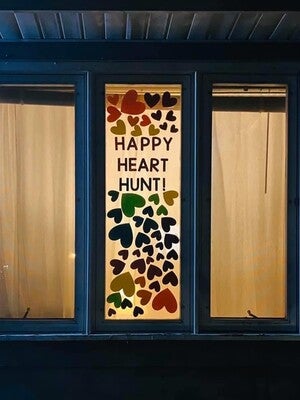 Leslie Brissette's daughter, Allyson Brissette, advertises the Happy Heart Hunt on one of the windows at her home in Beloit. Photo courtesy of Leslie Brissette

Because of the onslaught of messages and images, page administrators won't accept images of heart tattoos, pets with heart-shaped markings or heart-shaped potatoes. They're sticking simply to images of homemade creations.

"Ours is really about that homemade feeling of being able to have something that people see you put time and effort into," Brissette said.

Each picture that is posted receives its share of thumbs up and hearts on Facebook, and most are commented on by other people impressed or inspired by the pictures. Brissette hears from people who say looking at these posts is a bright part of their day, and appreciate the kind words people have for each other.

"We have a lot of people thanking our essential workers and nurses and doctors, and just really giving people a place where they can go and show their appreciation, even though they're stuck at home," she said. 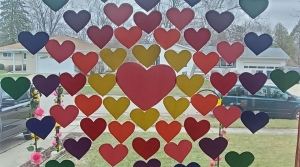 The Happy Heart Hunt Club on Facebook has inspired thousands across the counry to decorate their windows with colorful hearts and artwork. We talk with the Wisconsin teacher who started the group as a way to spread positivity during the coronavirus pandemic.