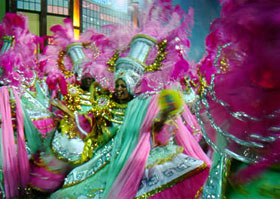 Ravel had Bolero, Rachmaninoff had his Prelude in C-sharp minor, and Constant Lambert had The Rio Grande–a work so popular that it overshadowed everything else he wrote. Like Ravel and Rachmaninoff, Lambert came to resent the public’s partiality to one of his works above all others. Unlike them, Lambert became best known for what is probably his best piece of music.

Lambert came from an aristocratic London background and early on was drawn to American jazz. In 1927 a poem by Sacheverell Sitwell inspired the twenty-two-year-old Lambert to write a work for solo piano, chorus, and an orchestra without woodwinds. The poem was about a South American port on carnival day and had nothing to do with jazz, but provided a convenient vehicle for Lambert to use in writing something jazzy.

Arranging a performance of The Rio Grande turned out to be a challenge because it was so different from the sort of things that English choral societies were trained to sing. Those that did take it on found it hard to get into the right spirit. They tended to end Lambert’s evocation of a South American carnival with a full-voiced contralto wearing a lavish evening gown.

Performers did what they could with it. A chamber performance featured an all-boy choir that gave a strange and unintended twist to the sensuous words and music. After a BBC performance a reviewer complained that the price of colonization was the black influence upon western poets and musicians.

The difficulties were largely forgotten in 1929, when Lambert conducted the first concert performance of The Rio Grande in Queen’s Hall in Manchester. A newspaper headline summarized the concert with the words: “Sudden Fame for a Young Composer. Queen’s Hall in a Frenzy. Jazz Changed into Music of Genius.”

And Constant Lambert was changed into an international celebrity.