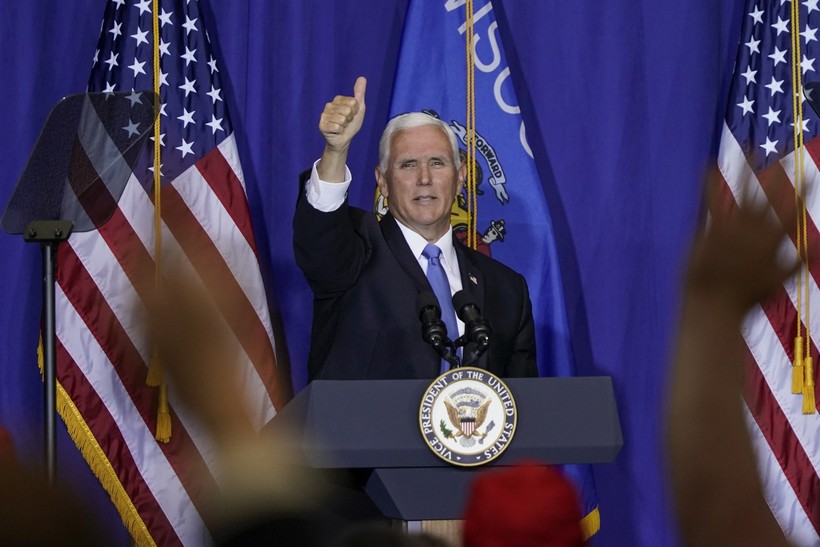 Mike Pence Campaigns In Janesville: 'The Choice Is Clear'

Vice President Mike Pence campaigned in Janesville Monday, marking the second time he’s been to Wisconsin so far this month. He said the "choice is clear" between President Donald Trump and his Democratic challenger, former Vice President Joe Biden.

With just 50 days until the Nov. 3 election, Pence repeatedly peppered remarks with calls for "four more years," prompting the crowd to chant in response. 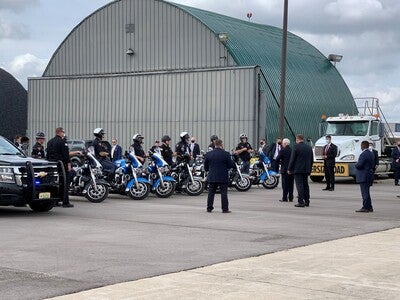 Following his Sept. 14 speech at a convention hall in Janesville, Vice President Pence departed from a regional airport, where he walked over to say hello to roughly a dozen state police and sheriffs lined up with their motorcycles on the tarmac before boarding. AP Photo

A second term for Trump would ensure "more jobs, more conservative judges, more support for police and our troops," Pence told supporters inside the conference center where chairs were spaced apart, but many attendees did not wear face masks or had them hanging below their chins.

"We’ve got new case spikes with colleges across the state and country, and our hospitals in our state can’t still, to this day, get the reagents they need to run tests, which is why we have a reduction in tests right now in our state in a pretty severe way," Pocan said.

Pence said millions of tests are being done across the U.S. and offered condolences to those who died from COVID-19.

"Our hearts go out to the families who’ve lost loved ones," he said. In Wisconsin, 1,210 people have died due to the disease.

Kolste, the state democrat who represents the city where Pence gave his speech, blamed the Trump administration for damaging the economy as businesses closed or scaled back operations because of the pandemic.

"We could have taken care of this. We didn’t have to shut down all the businesses if we had just been told the truth from the beginning," Kolste said, referencing claims that Trump downplayed the severity of the virus in the early stages of the pandemic.

But Pence said the economy has been made stronger by the administration cutting red tape for businesses, allowing them to operate more efficiently. As for the pandemic, Pence said the Paycheck Protection Program saved 50 million jobs, including in Wisconsin.

The presidential race puts the economy on the ballot, along with law and order, he said.

Pence also paraphrased part of a Robert Frost poem, "The Road Not Taken," as he urged Americans to take a path he told supporters would lead to prosperity and give the Trump administration four more years to "drain that swamp."

In a release prior to Pence’s Janesville visit, the Biden team criticized the Trump administration on an economy that has struggled in some sectors even before COVID-19.

"Even before the pandemic, Wisconsin manufacturers were struggling and farmers were weathering an erratic trade war. Today, many are barely hanging on," Biden deputy campaign manager and communications director Kate Bedingfield said in a statement.

Both campaigns have tried to appeal to farmers in the Dairy State, with Biden pointing to a high number of farm bankruptcies and Trump touting a new trade agreement with Mexico and Canada that could increase dairy exports.

Pence and democratic vice-presidential candidate Kamala Harris were both in Wisconsin on Labor Day.