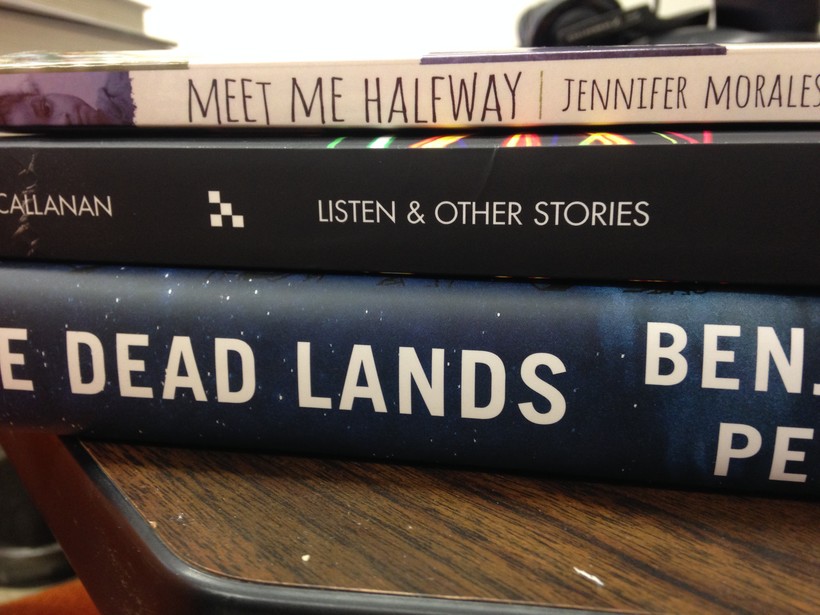 "Listen And Other Stories" by Liam Callanan

Liam Callanan’s latest is a book of stories connected by, as the title suggests, a need to be heard. The stories range across the world and touch on fear, hope, and loss while also managing to be humorous. My favorite—perhaps because of my life in radio—is the title story, about a father who records and sells screams to movie makers. He has a finely tuned ear for screams, insisting that a man wearing a hat screams differently than one without. But while his father records everything, from footsteps to birdcalls, his son wonders why he doesn’t have one of his mother who died before he was old enough to remember her.

Callanan teaches English at the University of Wisconsin-Milwaukee and is the author of "All Saints" and "The Cloud Atlas."

From “Listen,” the title story:

“My father spent a good portion of his career with a tape deck slung over his shoulder, a slender, stubby microphone nosing into his pocked like a dog looking for a treat. Walking along, driving along, there was no telling where he’d stop, look up (not at anything specific), slowly turn the microphone on and press record. Horns, airplanes, footsteps, tires beating through wet leaves, the breathing of someone hiking in snow, trombone lessons from a block away, a hot air balloon when the flame is first lit. And voices: one, two, male, female, three on a street corner, twenty in a small room, hundreds in a theater. And crying and laughing and cursing and shouting, and screams. My father was really good at screams.”

Listening comes up again in Jennifer Morales’ debut book of stories, "Meet Me Halfway: Milwaukee Stories." Morales grew up in a racially mixed family in the Chicago area and then moved to Milwaukee, where the racial divides shocked her. "Meet Me Halfway" is about segregation but also about the ways people bridge these divides. The book focuses on Johnquell Braxton, a black teen who helps a white Polish neighbor and suffers a serious accident. Each of the book’s nine stories are told from different perspectives while exploring the various ways that people misunderstand and hear each other, particularly when the person speaking is of a different race.

Morales lived in Milwaukee for more than 20 years and was the first Latina elected to the Milwaukee school board. She's since moved to Viroqua.

From the story “Prelude to a Revolution”:

“Loretta could always tell when John was steamed. He didn’t yell or even grumble like other men she knew. He fixed things. On this Saturday afternoon, he was checking all the cabinet door pulls in the kitchen. One had lost a screw this past week – it had worked itself loose and rolled away into a dark crevice under the sink – and now he was checking every other one for good measure.”

"The Dead Lands" by Benjamin Percy

What if Lewis and Clark were transported to a post-apocalyptic landscape? That’s the story behind Ben Percy’s new novel, "The Dead Lands." It reimagines the Lewis and Clark journey after a super flu and nuclear fallout.

After receiving a message from a supernatural Sacagawea figure named Gawea, Lewis Meriwether and Mina Clark set out from the Sanctuary—the remains of St. Louis—to find a new life and hope in the West.

Benjamin Percy is the author of two other novels, "Red Moon" and "The Wilding," as well two collections of short stories.

From "The Dead Lands":

“The wall is a constant in Simon’s life, everywhere he looks, impossible to miss. Yet it is as common as dust, as heat, as the sun’s blazing path across the sky, and it is easy to go days, weeks, without noticing it. It is of uneven height but at its tallest point reaches a hundred feet from the ground. In some places it is made from plaster and mortared stone, and in others, heaps of metal, the many-colored cars of another time, crushed and welded together into massive bricks that bleed rust when it rains.”