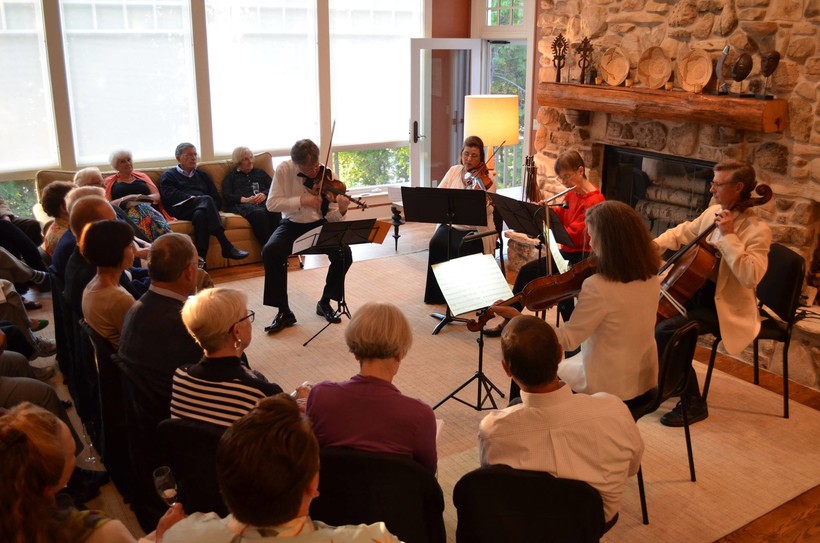 For more than 30 years, Midsummer’s Music has been brining chamber music to Door County. Its performances have included world premieres and feature world-class artists. The concerts attract more than 2,000 listeners each year, and reach many more via broadcasts on Wisconsin Public Radio and WFMT.

Its annual music series includes 40 concerts in various venues around Door County and draws musicians from Lyric Opera of Chicago and the Aspen Music Festival, among others. Its resident string quartet, the Griffon String Quartet, was created in partnership with St. Norbert College and the Fine Arts Institute in Green Bay.

Midsummer’s Music was founded by Jim and Jean Berkenstock. I asked Jim about the upcoming season.

Norman Gilliland: You’ve had Midsummer’s Music up and running for more than 30 years now. What have you learned about putting on a concert series?

Jim Berkenstock: My immediate response is to talk about the music. However, as I ponder your question a bit, I have to say that we have come to believe that the whole "Midsummer’s Experience" is fundamental. In fact, we have sometimes used the slogan, "It’s not just a concert, it’s an event." We are trying to convey the entire concept of a Midsummer’s Music program as it has evolved. It starts with the friendly greeting at the door and the first (of perhaps many) encounter with the bowls of M&M candies that have become part of our trademark. It continues with the welcome at the beginning of the program followed by a few verbal remarks about the music — why it was chosen, how it relates to the other pieces — just a few thoughts for context and to ease the formality of a concert.

It also involves the joyous and infectious quality exuded by the performers. This is fine music performed at a world-class level, but it is done in a sharing and fun-filled way. Establishing a kind of family feeling extends on into the welcoming receptions following the performance where musicians and audience interact with a lot of camaraderie. Chamber music allows for a great deal of intimacy and inclusion, and we try to capitalize on that. The better we have become at doing this, the more successful we have become.

NG: Your performers include professionals and students performing together? How do you put the ensembles together?

JB: We do not normally include students in our performances. That is more of the Birch Creek model. We are strictly a professional ensemble made up of some of the best musicians from around the country, but with an emphasis on those from Wisconsin and the Midwest. We have in our group, two members of the Pro Arte Quartet from the University of Wisconsin-Madison, players from Lyric Opera of Chicago, the Milwaukee Symphony, and players who have performed with the Atlanta Symphony, the Orpheus Chamber Orchestra, and the Chicago Philharmonic.

NG: How do students get involved with Midsummer’s Music?

JB: During our early years, we included youth concerts among our programs, but as our season grew in intensity and length, we discontinued those. However, last year we started the Griffon String Quartet Residency in Northeastern Wisconsin. This outstanding ensemble of young professional players, all with advanced degrees and substantial professional experience, is now active throughout the school year from the area around Green Bay up through the Door Peninsula, working with children, the elderly, other organizations such as the YMCA and Boys and Girls Clubs, the public schools and St. Norbert College. They appear in concert everywhere and anywhere they are invited, and provide teaching in both group and private situations in addition to their concert appearances.

NG: Do you record all of the performances?

JB: We have attempted to record at least one performance of each program. Initially, WPR sent an engineer to some of our concerts, but for the past two decades, we have brought in Steven Lewis, a recording engineer from Chicago (and one of the preeminent French horn makers in the world) to do recordings. We therefore have an archive of most of our programs done at different venues in our Door County travels.

NG: What do you do with the recordings?

JB: We typically supply some to radio stations including WPR and use them for PR. We also have excerpted some of the best performances for inclusion on our last two CDs. Our first two CDs (from the 1990s) were produced in studio and released on the Centaur Label. The last two, which we released over the last few years, have been collections of outstanding performances from our archive of Door concerts, and they can be heard on our own label, Solstice Records.

NG: Two of the works on this season’s program have been included in previous seasons. Who are the performers and what was the venue for the Mozart Clarinet Quintet?

JB: The Mozart Clarinet Quintet is from our 2011 season and was recorded at the Hardy Gallery in Ephraim. Violinists were David Perry and Stephanie Preucil; Sally Chisholm played viola; Walter Preucil played cello and Todd Cope was the clarinetist. Todd is now the principal clarinet of the Montreal Symphony.

NG: The Mendelssohn Sextet is something of a rarity. Who were the performers playing it in the 2013 Midsummer’s Music performance?

JB: The Mendelssohn comes from our 2013 season and was recorded at The Clearing in Ellison Bay. David Perry played violin, Allyson Fleck and Stephanie Preucil were the violists, Walter Preucil was the cellist; Jason Heath played double bass and Jeannie Yu played piano.

Mendelssohn was all of 15 when he wrote that outstanding work. It not only demonstrates what a fine and precocious composer he was, but it gives a sense of the extraordinary pianist he was judging by the piano part he wrote for himself. It his an interesting instrumentation with one violin, two violas, cello, and double bass set off against the piano.

NG: Your season will include works by composers who might be called "forgotten gems:" Louise Farrenc, František Škroup, and Robert Kahn.

JB: František Škroup is new to us this year. We were introduced to him by Jacob Beranek, our composer in residence, who brought the score and parts from one of Jacob’s many trips to the Czech Republic. Jacob is passionate about the music of his Czech heritage and was pleased to be able to bring us this first rate 19th century clarinet trio to present this season.

Louise Farrenc was the first full-time professor in the Paris Conservatory in the 19th century serving in that male-dominated institution for more than 30 years. She was a first-rate composer and we have performed several of her works over the years including her trio for flute, cello, and piano, which we recorded in 1994.

Robert Kahn is likewise a wonderful find whose music we have performed during several seasons. His music would be better known except that he never wrote in large scale forms. He wrote no symphonies or operas — only piano works, a large number of songs, and some very fine chamber works totaling nearly 1,000 compositions in all. He had a very fine professional career established in the early 20th century in Berlin, but it was cut short because the Nazi Regime labeled his music "degenerate" since he was Jewish. He escaped with his life to England to live out the rest of his life in a rather secluded state. He was a good friend of Brahms and taught some famous musicians including pianists Artur Rubenstein and Wilhelm Kempf and conductor Ferdinand Leitner.

NG: Your concerts this season go well beyond string quartets. In fact, the only string quartet is for the unusual combination of four violins. Otherwise it’s trios, piano quartets, wind quintets, and other configurations. Was that a conscious decision to emphasize ensembles other than the traditional string quartet?

JB: From the beginning, we sensed a resistance to the idea of chamber music, which we thought the general public perceived of as a group of four strings (string quartet) on a very large stage playing Mozart, Beethoven, and Brahms.  That seemed to be the common perception of chamber music. Some might even say, "stuffy." We determined to do the opposite. We made sure that every piece on the program had a different instrumentation from the last. We said we were like the Door County weather — constantly changing.  We included winds, strings, and piano to perform what is known as "mixed chamber music,” and we sought to continuously alter the texture and instrumentation of what our audience heard. We performed in small venues where the audience sat almost in the lap of the performers and got to talk with them over casual and inviting receptions afterward.

We tried to create a bit of a learning experience by introducing some interesting forgotten composers into the mix and then gave some pertinent verbal comments to create a context. Above all, we wanted to make it a fun experience that was both casual and exhilarating. And, we wanted everyone who attended to go away having made some new friends — musician and/or audience.

NG: You do have a string quartet in residence though. Who’s in the Griffon String Quartet?

JB: Three of the members of the Griffon are graduates of UW-Madison. Two of them are former members of the Hunt Quartet at UW-Madison. They all have advanced degrees and significant professional experience performing worldwide that belies their youthful appearance and manner. They have exceeded our expectation in this first year with their wonderful musicianship layered on top of their winning personalities and dedicated commitment to establishing a substantial musical entity in northeastern Wisconsin that will benefit the entire community. Audiences respond so enthusiastically, regardless of age, because the group seems to enjoy what they are doing, enjoy each other, and have such fondness for one another, and listeners really relate to that while simultaneously enjoying the music and the excellent performances.