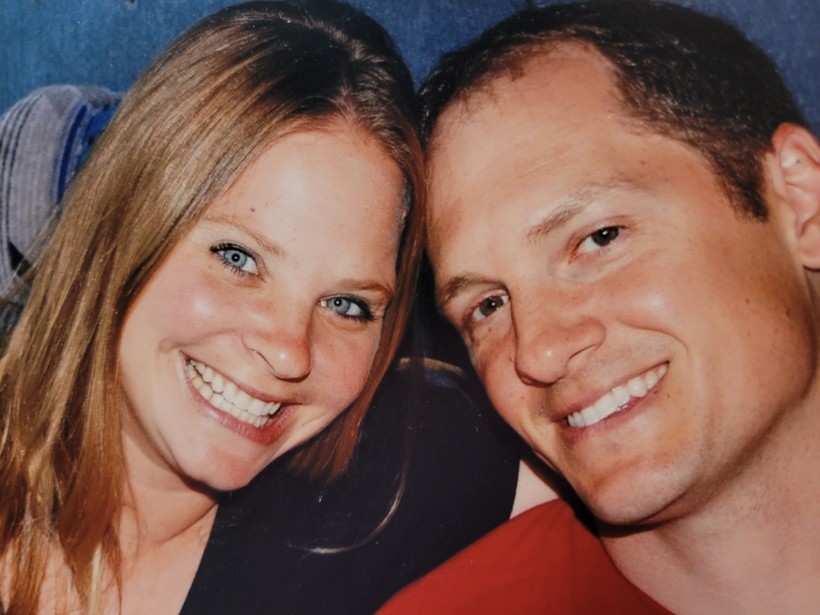 Burke Hainline, right, and his wife Dawn pose for a photo. Earlier this month, Burke suffered a rare stroke that would likely have left him dead or disabled just a few years ago. But advances in medication and surgery and the quick action of his wife left him with virtually no brain damage. Photo courtesy of the Hainlines

It shouldn’t be this difficult. It’s just a carton of eggs, thought Stoughton resident Burke Hainline, 51, as he stood before his open refrigerator on a recent Sunday morning.

The night before, he and his wife had friends over to plan a joint vacation to the Caribbean. But Hainline went to bed early with a headache — a pretty frequent occurrence over the past year. The headache was still there when he woke up in the morning.

Eggs in hand, he raised and lowered his right arm a few times but couldn’t quite get it to move right.

"The right side of my body just started getting way weaker all of a sudden. So I kind of just sat down and put the eggs on the ground and kind of fell over onto my back," Hainline said.

At that point, he called out to his wife, Dawn. Or at least he thought he did.

Dawn Hainline was on the couch in the next room when she glanced over and noticed the eggs on the floor.

When she came into the kitchen to investigate, she found Hainline sitting on the floor, leaning against the kitchen island. At first, she thought he might be joking around. But then she realized he couldn’t talk, and as he struggled to lift himself up she noticed he couldn’t move the right side of his body.

"Then I was freaking out," Dawn said.

But she kept her cool. As an educational assistant at Stoughton High School, she is trained in first aid and CPR, so she quickly recognized that her husband was having a stroke and she knew she needed to act fast.

What they would come to learn in the hours that followed is that Burke suffered a significant stroke caused by an incredibly rare condition. But even more remarkable is the fact that Burke would walk out of the hospital two days later with virtually no damage to his brain.

'The worst day of my life'

Around the same time the Hainlines were arriving at the emergency room, Dr. Christopher Baggott was at home making maple syrup.

As a neurosurgeon and neuroendovascular surgeon, Baggott heads the stroke team for SSM Health St. Mary’s Hospital. He’s kept in the loop when stroke patients arrive at the ER, especially in serious cases like Burke's.

Baggott said EMTs conduct stroke assessments on the way to the hospital. By the time they arrive, there’s already a specialized team of providers standing by. The first thing they did in Burke's case was order a CT scan to confirm what they all suspected.

"It became clear that he was having what we call a large vessel occlusion stroke — that's the name for a big bad stroke, where there's a visible blood vessel being blocked off," Baggott said. 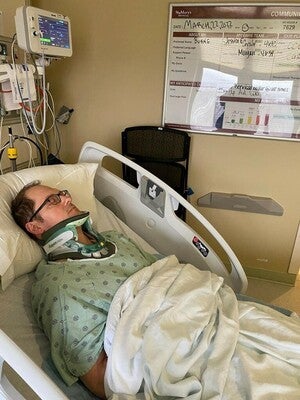 Stoughton resident Burke Hainline, 51, lies in a hospital bed at SSM Health St. Mary’s Hospital in Madison after suffering a significant stroke. Thanks to advances in medication and surgery, as well as the quick action of his wife, he left the hospital after two days with virtually no brain damage. Photo courtesy of The Hainlines

And Burke's condition was pretty severe — he was unable able to understand or speak, and couldn't move anything on the right side of his body.

As the CT revealed, his carotid artery had a major tear. Blood was flowing out of the artery and a clot had floated up into his brain.

The tear was caused by a condition called Eagle syndrome, where ligaments joining the skull and throat become calcified. In Burke's case, the hardened ligament pushed on and stretched his artery until it tore.

According to Baggott, about 3 to 5 percent of the population have Eagle syndrome, but there are only 17 previously documented cases of it causing a stroke.

"It is extremely rare," Baggott said. "Something that you expect to be tested on (in medical school), but never actually see."

With the severity of the situation, Baggott was at the hospital 20 minutes later, mobilizing his Stroke Thrombectomy Response Team. They were going to attempt to remove the clot.

That’s when the endless waiting game began for Dawn.

"I felt like I was sitting there forever," she said. "I didn't know if he was going to be a vegetable ... I kept thinking the worst."

And because of COVID-19 restrictions, Burke could only have one visitor at the hospital. His parents and two teenage children were at home while Dawn waited alone.

"It was like the worst day of my life, and I was there by myself," Dawn said. "That was scary."

A new way of treating the 'biggest, baddest strokes'

Just a few years ago, Dawn's fears would have been pretty sound. Baggott said that back then, about 70 percent of significant stroke victims either died or were left with severe disabilities.

"The best we had to offer was, you know, trying to prevent the people from dying," Baggott said. "The odds of getting back to ... full and complete life were very low."

Newer clot-busting medications like Tenecteplase are much better at breaking up what Baggot calls the "biggest, baddest strokes." If they can be administered within about four-and-a-half hours from the last time the person was known to be well, Baggott said they are pretty effective.

But medication alone has not made the difference.

"The newer medication is a nice breakthrough, but the real kind of earth-shattering change was that we proved the theory that if you open up these blood vessels mechanically, people do better," Baggott said.

In severe cases like Burke's, doctors are increasingly turning to thrombectomies — the surgical removal of a blood clot. And as medical technology has improved, Baggot said the surgery has gotten easier, expanding the window of time in which it can be effective.

These were the moves that saved Burke's life.

And while the wait may have seemed like an eternity for Dawn, in reality, Burke was out of surgery in about two hours. And a follow-up MRI brought nothing but good news.

"(Dr. Baggott) said the results were fantastic ... he was high-fiving the other doctor because of how well it looked. So that made me feel really good," Dawn said.

According to Baggott, the medication and surgery were able to prevent a complete stroke. While Burke will likely need follow-up to address his Eagle syndrome, Baggott said he sustained virtually no damage to his brain.

"When I got that news, then I could actually breathe because I knew that everything was lining up the way it should," Dawn said.

When Dawn visited Monday morning — just hours after the surgery — her husband was sitting up in bed, able to talk and even using a slightly weak right hand to eat.

"It was just amazing," she said. 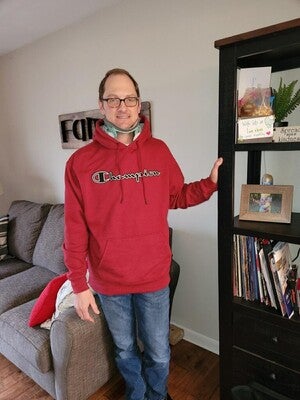 Burke Hainline, 51, stands in his Stoughton home where, just days before, he collapsed from a massive stroke. Photo courtesy of The Hainlines

By Tuesday, Burke was discharged and by Wednesday, he was grocery shopping.

"The treatment has really evolved from, you know, trying our best and often unsuccessfully to prevent death to kind of expecting somebody to be where Burke is, which is, you know, by the middle of the next week asking when he can go back to work," Baggott said.

But the results might have been much different if Dawn hadn’t acted so quickly.

"Getting him to us right away left all the options on the table, as far as clot busting medication, and getting to him before the brain that was beyond the blockage ... died permanently," Baggott said.

Act FAST to save stroke victims

According to data from the Centers for Disease Control and Prevention, each year nearly 800,000 Americans have a stroke — about one every 40 seconds. Strokes are the fifth leading cause of death in the U.S. and a leading cause of long-term disability.

But even with the advances in treatment, Baggott said the most important survival factor is response time.

"If we don't get to the people until the stroke’s already completed, there's nothing we can really do. But if somebody sees them start having trouble, they call 911, they get them to us right away, we can have a darn good shot these days," he said.

The American Stroke Association and medical providers use the acronym FAST to help people remember to act quickly when they see the signs of a stroke:

"If you have somebody who shows any of those symptoms, you're not the boy who cried wolf, you call 911, get them checked out. Because the cost of missing one of these things is just too high," Baggott said.

Burke said he knows how lucky he is, especially after seeing a former colleague emerge from a stroke with partial paralysis.

"I’m definitely appreciative of how fast they were able to get me in and get things figured out and resolved," Burke said. He’s eager to get back to work as a sales manager and encouraged people not to ignore persistent headaches.

The Hainlines had to postpone their vacation, but they’re just happy to be taking it. And a few months from now, instead of lying in a hospital bed, Burke will be lying on the pool deck of a cruise ship floating in the eastern Caribbean.