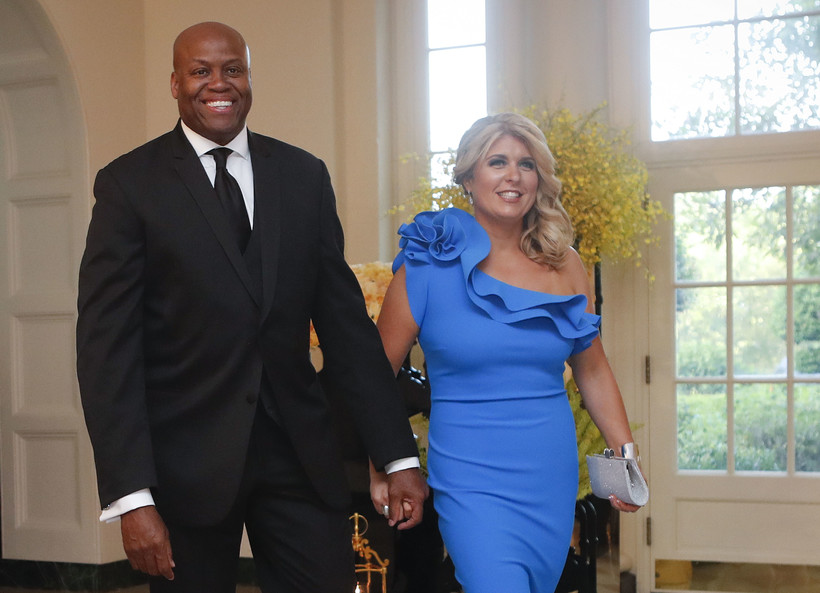 Craig Robinson, brother of former First Lady Michelle Obama, and his wife, Kelly Robinson, arrive for a State Dinner for Singapore's Prime Minister Lee Hsien Loong, Tuesday, Aug. 2, 2016, at the White House in Washington. The Robinsons are suing a private Milwaukee school alleging it refused to allow their two young sons to re-enroll after they raised concerns about racial and ethnic bias by school staff. Pablo Martinez Monsivais/AP Photo

The Robinsons allege their students were told they couldn't reenroll in retaliation over complaints about racial, economic bias
By Madeline Fox
Share:

Two parents are suing the private University School of Milwaukee, alleging their sons' enrollment was terminated after they complained about racist incidents at the school.

Craig Robinson, brother of former First Lady Michelle Obama, and his wife Kelly say they were told in April and June of last year that their sons, then 11 and 9, would be dismissed from University School of Milwaukee, or USM.

In their lawsuit filed Monday, the couple contends their "model, high-achieving students" were dismissed from the school after the Robinsons submitted bias incident reports and raised concerns about USM’s treatment of students of color and low-income students.

"This all started, as a lot of parents, we heard what was going on in the classroom because of COVID, and there were repeated uses of racial and ethnic stereotypes that were in actual assignments," Craig told "Good Morning America" on Tuesday. "In addition to racial and ethnic stereotypes, there was an insensitivity to socioeconomic status, as well as a disregard for the children who weren't physically in the classroom."

In a statement on its website, USM said it can't comment on threatened or pending litigation, but pushed back against the idea that students would be dismissed as a retaliatory measure.

"We can tell you that USM’s enrollment decisions had nothing to do with complaints of inequity or discrimination and we intend to vigorously defend the school against any claim to the contrary," the statement said. "We cannot and will not tolerate persistently disrespectful, bullying, or harassing behavior directed at our devoted and hardworking teachers and administrators... When such parental conduct threatens the educational environment we have created, we have no choice but to take action."

The Robinsons started a website with information about their lawsuit, entitled Don't Trust USM, that includes letters from another former USM parent and a former faculty member, as well as a link to the Instagram account Black at USM, which was created in June 2020 and has shared experiences from current and former Black students at the majority-white school.

In the "Good Morning America" interview, Kelly said she'd gotten positive feedback from the head of school after she and other parents raised their concerns about lessons and attitudes at the school.

"In fact, at one point, he even told me that I should be on his payroll because of the amount of information I had provided to him," she said. "What we wanted was for them to make change, and instead of doing the right thing and helping these students, they dismissed our young sons."

The lawsuit laid out a history of other incidents, including an exercise that continued into the 2010s that had fourth grade students dress up in worn or damaged clothing to act as enslaved people on the Underground Railroad while their teachers played slave-catchers trying to find them.