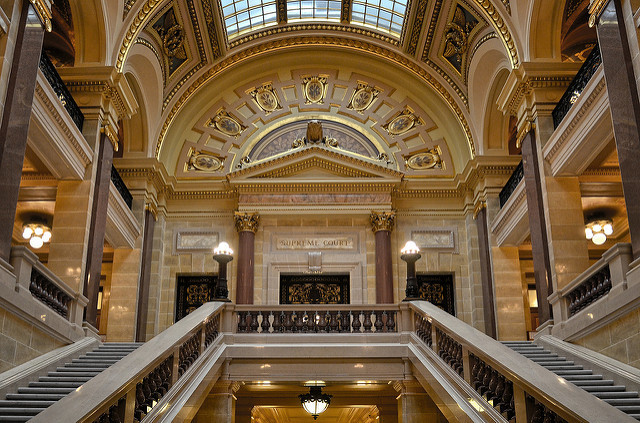 2 Judges Will Face Off Again In April 3 General Election
By Chuck Quirmbach and WPR Staff
Share:

Screnock and Dallet were the candidates to receive the most votes in Tuesday's primary.

The outcome sets up an April election between two justices with starkly different ideologies. While Screnock separated himself from discussions of partisanship throughout the primary, he has strong Republican ties.

He was appointed a judge by Republican Gov. Scott Walker in 2015. He had the backing of the Wisconsin Republican Party and had previously worked as an attorney defending Walker's Act 10 collective bargaining law and legislative maps drawn by Republicans that are currently being challenged before the U.S. Supreme Court. More than half of his campaign donations prior to Tuesday's election, roughly $142,000, came from the Republican Party of Wisconsin.

After the call was made, Screnock said voters saw the clear contrast between him and two liberal opponents in the Wisconsin Supreme Court race.

Screnock told The Associated Press his win shows voters agreed with his message that he was committed to upholding the rule of law and not advocating for a political ideology.

As for garnering the most votes out of the three candidates, Screnock told WPR that voters across the state had validated his message.

"Voters all across the state of Wisconsin have validated our message, which we have been consistent with from day one: That the justices on our court need to uphold the rule of law, they need to respect the separation of powers, and they need to interpret the Constitution as it was originally intended and not try to invent new rights or to be creative from the bench," he said.

Looking ahead to the general election, Screnock pointed to the key different between himself and Dallet. After learning that she had advanced, Dallet said she could win the Supreme Court seat by "fighting for the people."

"We made it," she told those who attended a gathering Tuesday night in Shorewood. "But this is only the first step. Now, we have (to) reach a lot more people and we have to tell them about our vision for a more fair and independent judicial system. The courts have been taken over, like so much in our life, by dark money and special interests."

Dallet said spending on the part of outside groups have already entered the race, referring to campaign ads supporting Screnock.

"One of my opponents has already had close to $1 million spent on his behalf, $1 million! And it could be 10 times that in April," she said. "But I also want to be very clear: I am ready for this."

Dallet was elected judge in 2008. Throughout her primary campaign, Dallet emphasized her career as a judge and a prosecutor. Still, she tried to attract Democratic voters by running an ad critical of President Donald Trump. She also criticized the Supreme Court for ending an investigation into Walker.

The court is controlled by conservatives, 5-2.

Turnout in Tuesday's primary was 11.9 percent. That tops the 7.3 percent average for spring primaries over the past two decades where a state Supreme Court race is the only statewide contest on the ballot.