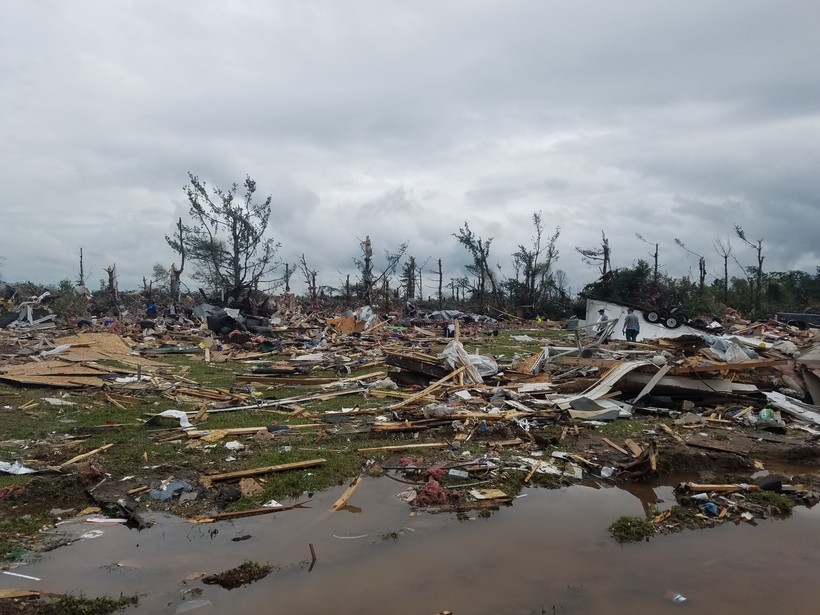 As Tornado Season Heats Up, Residents Should Be Ready For Anything
By Elizabeth Dohms-Harter
Share:

After a powerful and destructive tornado tore through Joplin, Missouri in 2011 and left about 160 dead and more than 1,000 injured, many began to pay greater attention to these kind of storms and what they could do to prepare.

In fact, National Weather Service forecasters who worked out of the office in Springfield tracked a spike in those interested learning more about tornadoes and how to be prepared.

Because Wisconsin hasn't seen a natural force of that magnitude in more than 20 years, National Weather Service warning coordination meteorologist Tim Halbach is worried of a growing complacency as tornado season gets into full swing.

"Our concern is that the people that haven't seen a tornado like that in a long time aren't going to be prepared and have those options ready for them for when that day comes that we get that next violent tornado," Halbach said.

About 1,200 tornadoes occur each year in the United States. Although they can occur in any season so long as conditions are right, most tornadoes in Wisconsin occur in June, Halbach said.

A tornado's strength is rated on a scale of EF-0 to EF-5. Zeros, ones and twos are the most common types of tornadoes, which don't often result in injuries or fatalities. EF-4 and EF-5 tornadoes are violent, with the worst twisters topping out at wind speeds higher than 200 mph.

It's been 22 years since the Wisconsin's last violent tornado in Oakfield, where four homes in a span of few miles were ripped off their foundations and automobiles were launched about 400 feet, the NWS reported. With speeds at times reaching an estimated 265 mph, the tornado eventually destroyed 60 homes and six businesses, and injured 12 people.

Halbach watched that storm from the doorstep of his parents' home. Although he was three or four miles to the north, the image of the twister roping out and dissipating was burned into his memory and kicked off his interest in pursuing a career in meteorology.

Now based in the National Weather Service in Sullivan, Halbach said southern Wisconsin averages eight to 10 tornadoes a year, with the state averaging 23.

Without reaching violent statuses, such as the tornado in Oakfield, tornadoes of any strength can still kill and leave paths of destruction in their wakes. An EF-3 tornado in early May last year tore through a trailer park in Barron County, killing one and injuring 25 people. Gov. Scott Walker at the time calling it a "miracle" that more people weren't hurt.

That storm led to Walker issuing a state of emergency for Barron, Jackson and Rusk counties, which bore the brunt of the storm.

When conditions are coming together for a storm, a watch will likely be issued, Halbach said. That can occur between two and six hours before the storm becomes severe. Warnings are issued when a storm is present and has the capacity for damage.

"(Warning is) when you should be seeking shelter," Halbach said.

Warnings are issued 13 minutes before a twister event, on average, but can sometimes go into effect with much less lead time. Warnings are only issued when a tornado has been sighted or weather radar indicates their presence or probable development.

"It's difficult for us to balance that because we want to make sure that we hit everything and try to give some kind of heads up that there's a tornado that's coming," Halbach said. "But at the same time we don't want to just toss out a tornado warning for the fun of it."

Experts suggest open spaces of open-plan buildings, vehicles and mobile homes don't provide adequate protection against a twister. It's better to seek shelter in a sturdy building in an interior and windowless room in the basement or on the lowest level of a building. Find a coat or blanket to further cover yourself, they suggest.