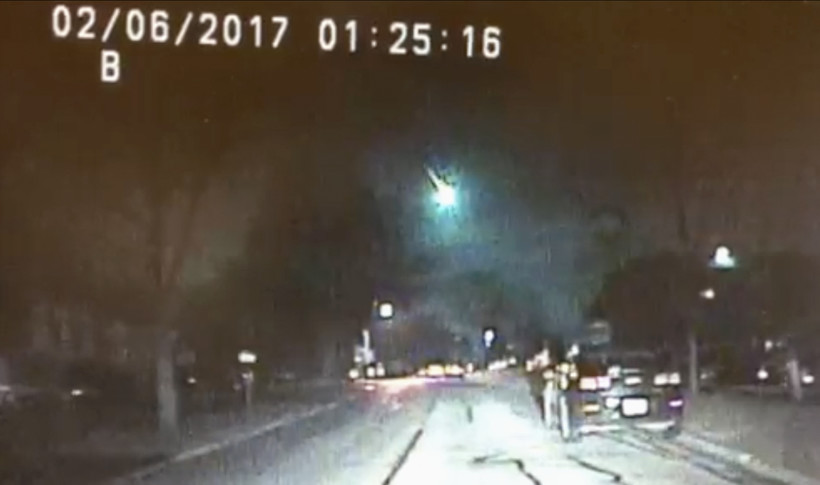 This image from a dashcam video provided by the Lisle Police Department in Lisle, Ill., shows a meteor as it streaked over Lake Michigan early Monday morning, Feb. 6, 2017. The meteor lit up the sky across several states in the Midwest. AP Photo

A Meteorite Crashed Into Lake Michigan 2 Years Ago. Scientists Are Close To Finding It

At the bottom of Lake Michigan, somewhere between Manitowoc and Sheboygan lies a meteorite.

The 600-pound meteorite made headlines across Wisconsin when it lit up the skies and was captured on dash cams and cell phone cameras as it crashed into Lake Michigan on February 6, 2017, about 10 miles from the shore.

Settling in 200 feet below the surface, finding the meteorite is no simple feat.

Meteorites are basically iron, so a group of scientists and teenage volunteers from the Adler Planetarium in Chicago built a magnetic sled that skids along the bottom of the lake to detect iron.

What they didn’t anticipate was that that particular stretch at the bottom of Lake Michigan isn’t smooth and sandy — it’s a layer of magnetic sediment.

But that wasn't the only distraction, said Jack Morgan, a teen participant in Project Aquarius from the Adler Planetarium.

"We went down to the bottom of the lake and we initially expected ... maybe the occasional patches of the invasive mussel species the quagga mussels, and instead it was the complete opposite," he said. "It was just a bed of nothing but mussels with only occasional clear spots."

Mussels are filter feeders, which means they suck in iron in the water — becoming magnetized themselves.

"We pulled up the sled for the first time and the magnets were covered in mussels," Morgan said. "It was like we were dredging up something that had been left to rot down there and the mussels had taken up root. It was one heck of a cleanup operation on the first day."

A couple of years and many trips to the bottom of the lake later, Chris Bresky, teens program coordinator at the Adler Planetarium, can’t officially confirm they’ve found pieces of the meteorite, but they have promising candidates they’ll be analyzing in the next week.

From building the sled to designing sensors that would help map the bottom of the lake, the teen participants have been instrumental to the project, Bresky said.

"Less than 1 percent of the Great Lakes have been mapped in detail and so when the sled was deployed into this new area, we're actually exploring uncharted territories. They were going into a new frontier," he said.

As for why finding the meteorite is so important, Bresky said every meteorite has a story that can help reveal the history of the solar system.

"What's even more exciting about this one is that because so much video recording was made of it, our astronomer over at the Adler Planetarium ... was able to track its path back out into its original orbit in the main asteroid belt," he said.

"So we find a piece of this meteorite, we find a puzzle piece of the makeup of our solar system, less than 30 meteors in the history of astronomy have that much data," he continued. "So this is pretty, pretty exciting."

Bresky and Morgan, along with other scientists from the project, will be at the Wisconsin Maritime Museum in Manitowoc Saturday to talk about the project.

The Hunt For Meteorities In Lake Michigan 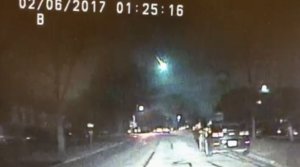 Imagine being tasked with finding marble-sized pieces of a meteorite 200 feet below the surface of Lake Michigan between Manitowoc and Sheboygan. Scientists and a group of teenage volunteers are on the hunt with the help of a special sled. Our guest tells us all about Project Aquarius.