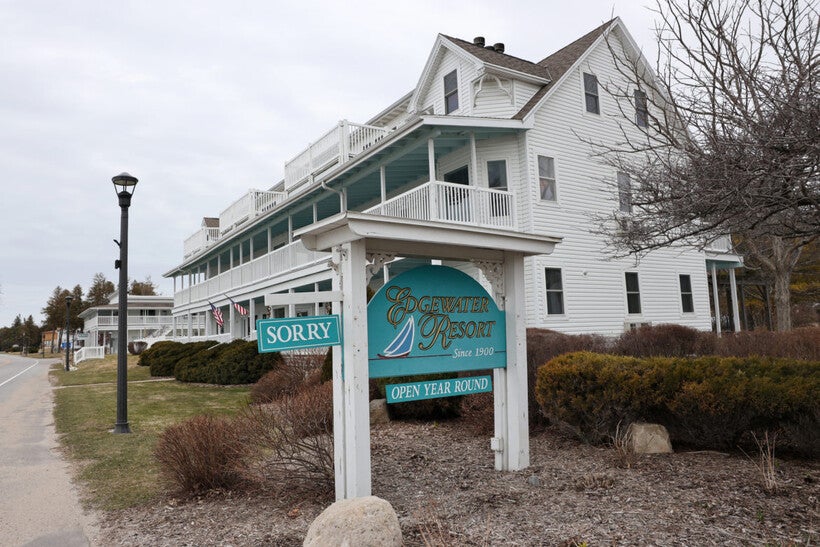 The Edgewater Resort, usually open year-round, displays a "Sorry" sign on March 31, 2020, in Ephraim, Wis. Hotels and other tourist attractions had closed during the pandemic to discourage tourists from visiting. Coburn Dukehart/Wisconsin Watch

One of the year’s biggest travel weekends comes on the heels of a statewide stay-at-home order. With the statewide order gone after the Wisconsin Supreme Court struck down restrictions put in place by Gov. Tony Evers' administration, some communities are working to attract visitors.

But reliably large crowds of tourists looking for a carefree getaway aren’t a given this year due of concerns about the novel coronavirus. And while many businesses are already open or are preparing to, some just don’t have enough time to make the needed accommodations to ensure people maintain a safe distance from one another.

"For the most part, we are open," said Door County Administrator Ken Pabich.

Door County, which sits between Lake Michigan and Green Bay, is known for its fish boils and cherry orchards. It’s one of the state’s top tourist attractions.

Like several other counties in the state, Door County has a plan to reopen. Some communities rely on health criteria that need to be met. Door County, which had 34 positive cases of COVID-19 as of Thursday, is opening right away.

Pabich said businesses are following recommendations on how to operate during the pandemic based on guidance from the Wisconsin Economic Development Corp. along with federal health officials. They're also relying on customer cooperation.

"When visitors do come, we’re hoping they’re willing to work with us to follow best practices. Then it’s a win-win for everybody. We can work together and kind of be the model of how we can do it," he said.

According to a report on estimated sales tax lost during the economic downturn caused by the COVID-19 pandemic, Door County could lose more than $928,000 this year.

That’s nearly 21 percent of all predicted sales tax Door County could collect this year. Sauk County comes in a close second for the percentage of sales tax decline predicted as people buy fewer items, rent fewer hotel rooms and eat out less often, according to the report prepared by Forward Analytics, the research arm of the Wisconsin Counties Association.

Local sales taxes declined about 10 percent during the Great Recession.

"So counties that rely on that to a greater degree are getting hit much harder in this downturn than they were in 2008," said Forward Analytics director Dale Knapp.

Whether those estimates are realized and how much it affects counties depends to what degree they rely on sales tax. Door County is about average, Knapp said, counting on sales taxes for about 9 percent of total revenues. Sauk County, on the other hand, is in the double digits.

Sauk County, which had 77 positive cases of COVID-19 as of Thursday, has a plan to reopen that emphasizes personal responsibility and business accountability along with public health mitigation. Their approach is described as "a three-legged stool," according to the Sauk County Public Health website. "If one leg is weak, there is risk of the entire stool failing to protect the person sitting on it."

Where people go — or don’t go — for vacation may depend less on what a location has to offer and more what it doesn’t have: namely, crowds.

"I think people will be less reluctant to go to Door County than they will the Wisconsin Dells. The Wisconsin Dells is much more crowded in terms of attractions there. Door County is more spread out. But it's going to depend on how comfortable people feel going out to these places. And we really don’t know that yet," said Knapp.