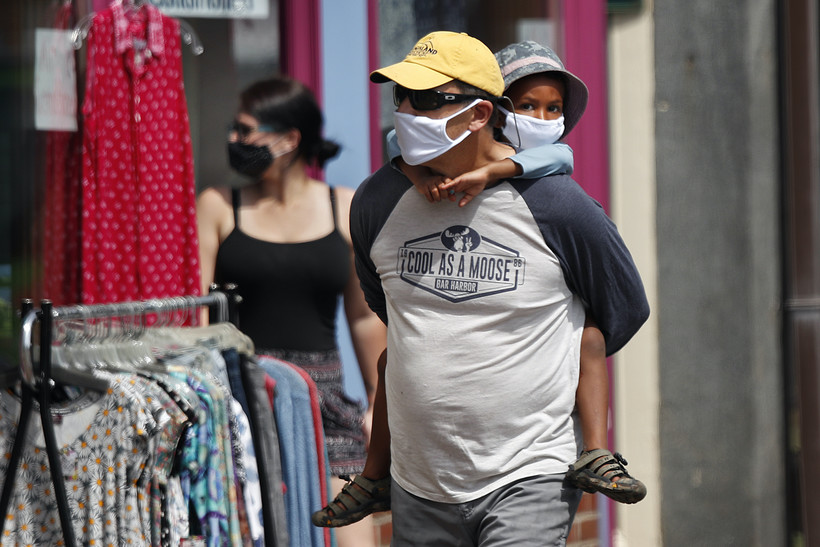 An online form inviting the public to report violations of Wisconsin's mask mandate has prompted complaints in one rural county. It's part of a larger set of questions around how — and whether — the statewide mandate should be enforced.

In Clark County, the health department launched an online reporting tool that invites residents to submit violations of the mask mandate, which the county says is designed to "alleviate the influx of phone calls" about the order. But it's been met with criticism from those who feel like it encourages a heavy-handed or scolding approach to enforcement.

Some contend that because complaints can be made anonymously, it could encourage people to target others for personal reasons.

"I don't know why everybody's getting so excited about it," said Wayne Hendrickson, Clark County Board chair. "If I'm mad at you and I see you somewhere where you should have a mask on, I probably am going to turn you in — but I doubt whether anybody is going to (prosecute)."

Hendrickson said any complaints received through the online form will go to officials including the district attorney, who will decide whether to follow up. Clark County Health Officer Brittany Mews did not respond to requests for comment about the reporting tool.

The announcement of the tool prompted some complaints from citizens, Hendrickson said. In a Facebook post, state Rep. Bob Kulp, R-Stratford, wrote, "Really?! In Clark County?" and encouraged residents to call their county board members.

Clark County, which has about 35,000 people and has reported 180 confirmed cases of the virus and seven deaths, is not the only place to have set up a reporting system for the public. Fond du Lac County created a mask noncompliance phone line to field complaints. On Friday, the Wausau Pilot & Review reported that Marathon County would launch an online form similar to Clark County's.

After Gov. Tony Evers announced the mask mandate on July 30, many sheriffs and police chiefs said their departments would not enforce it. In some cases, they said they were concerned about having a flood of mask-related 911 calls flooding their phone lines. Others stated broader opposition to the policy.

But the order was never intended to be enforced by police. In an interview with WKOW-TV, state Attorney General Josh Kaul said the role of police would be to provide education on the policy. Enforcement, when necessary, falls to health departments and district attorneys.

Members of the Evers administration and other public health officials have said that the policy's success depends on voluntary compliance rather than enforcement measures.

Still, the existence of the universal policy raises the question about what consequences are possible for those who don’t comply. Individuals are subject to a $200 fine. And local officials can levy other penalties on businesses. A Middleton coffee shop that publicly forbade customers from wearing masks now faces the possible loss of its food and drink license.

There is broad scientific consensus that widespread mask-wearing helps to slow the spread of COVID-19. Public opinion polling consistently shows that mask mandates are broadly favored by Americans across the political spectrum. A Yahoo News poll released July 30 found 73 percent of respondents believed states with large caseloads should mandate masks — 65 percent of Republicans, 80 percent of Democrats and 72 percent of Independents. An AP-NORC poll in mid-July found 75 percent favored mask mandates, and 86 percent said they personally wore masks when leaving home.

All regions of Wisconsin are experiencing high community spread of the virus, according to the latest data from the Department of Health Services.

Hendrickson said in Clark County, mask-wearing seems more prevalent among younger people than among older residents, even though the elderly are more at risk of serious complications from COVID-19. He said absent extraordinary circumstances, he didn’t expect to see serious efforts to target individual violators for penalties.

"A lot of the older people I talk to, even the ones on the County Board, they say, 'I'm not wearing a damn mask,'" Hendrickson said. "Well, don't! I don't care if you do or not. It's up to you."