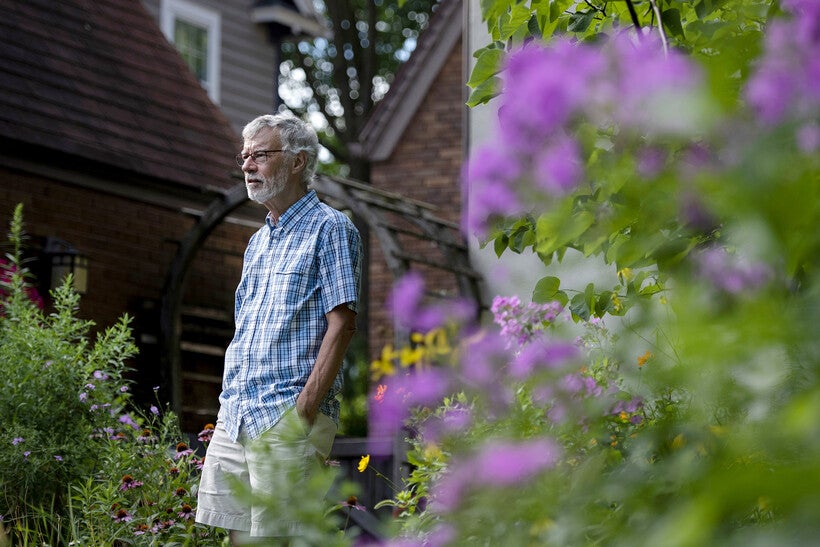 Mike Kepler, son of Wilford and Mary Kepler, at his home in Madison. Angela Major/WPR

As Of Tuesday, State Has Lost More Than 1,000 Lives To COVID-19
By Rachael Vasquez
Share:

Editor's note: Wisconsin has crossed a sobering threshold. As of Tuesday, more than 1,000 people in the state have been killed by the coronavirus. This includes Dosha "DJay" Joi, a 28 year-old who advocated for foster youth. Longtime Washington High School basketball and track coach Ralph Davis, a pillar in his Milwaukee community, also fell victim to the virus. This week, WPR News and "Wisconsin Life" are bringing you the victims’ stories.

Mike Kepler, the oldest of Wauwatosa couple Mary and Wilford Kepler's three children, smiled when he talked about his parents on a sunny afternoon in July.

Mike said that Wilford, 94, was more reserved, but loved a good corny joke.

"We always groaned at most of his jokes," Mike said. "But he liked telling them and enjoyed getting the reaction." 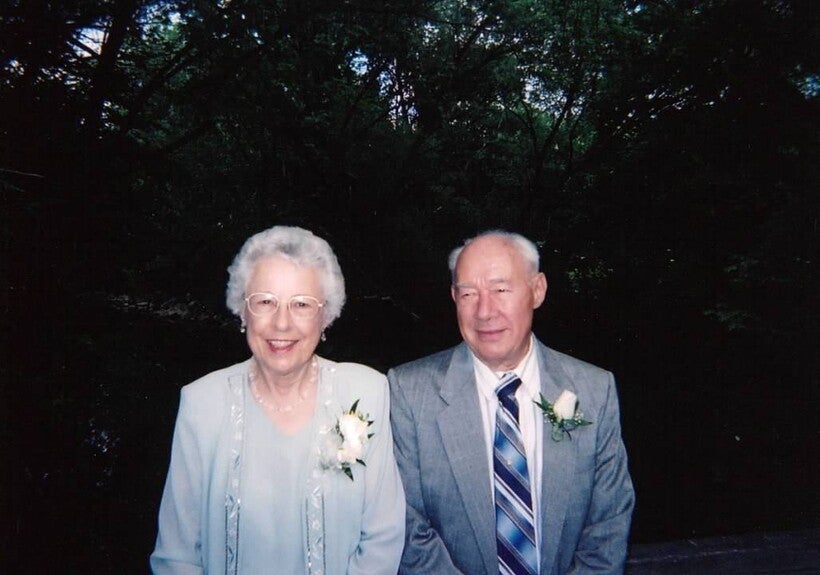 Wilford and Mary Kepler at their daughter Shelley's wedding in 2003. Photo courtesy of Mike Kepler.

Mary, 92, was the outgoing one — she loved to dance and had what her son called "spark."

"If we were at a wedding and friends of mine were sitting around, she'd go up and ask them to dance," Mike said. "And if she wouldn't get a dance from one of the people, she'd make sure that next person down would be asked to dance. So she liked to be out there on the dance floor."

A Life Of Service And Family

Wilford and Mary were both born in southwestern Wisconsin in the 1920s, and grew up during the Great Depression.

"Money was an issue for both the families, I know that for sure," Mike said. "It was very, very tight."

Wilford's family had a farm in Richland County where he grew up learning how to milk cows and grow tobacco. His family later lost the farm in the aftermath of the Depression. 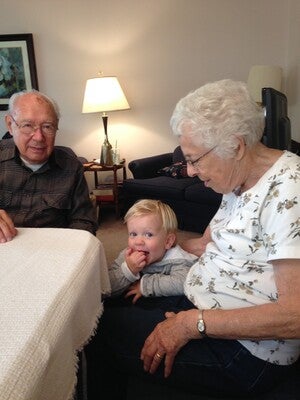 Wilford and Mary Kepler with their great grandson Dax in 2017. Photo courtesy of Mike Kepler.

Mary grew up and attended school in Grant and Richland County.

When Wilford was 18, he was drafted into the Navy to fight in World War II. Mike said his dad served as a pharmacist's mate, going all over the Pacific Ocean to treat soldiers who were wounded. In the Battle of Okinawa, Wilford treated a sailor whose ship had been hit by kamikaze planes.

"I know he stayed up with one of the sailors coming off that ship who had been badly injured," Mike said. "He stayed up with the guy all night just making sure that he knew that somebody was there for him."

That’s also when he started talking to Mary, who was a cheerleader at her high school in Richland Center, according to Mike. Mary started writing letters to Wilford.

"Then when he came back from the war I think he probably made a beeline to her door," said Mike.

The two got married in 1946, and had three children. Wilford worked as a machinist around Milwaukee, and Mary picked up factory jobs, eventually ending up in an office position at U.S. Steel.

'The Grief Was Almost Overwhelming'

Wilford and Mary started feeling sick in April, according to a Milwaukee County medical examiner's report, as did their daughter Michelle, who was caretaking for them. A few weeks into feeling sick, Michelle and Mary got tested for COVID-19, and soon learned they had the virus.

"When she told (Wilford) that the results had come back on a positive COVID test for both her and my mother, she said he got tears in his eyes," Mike said. "So I think he knew that the end was near." 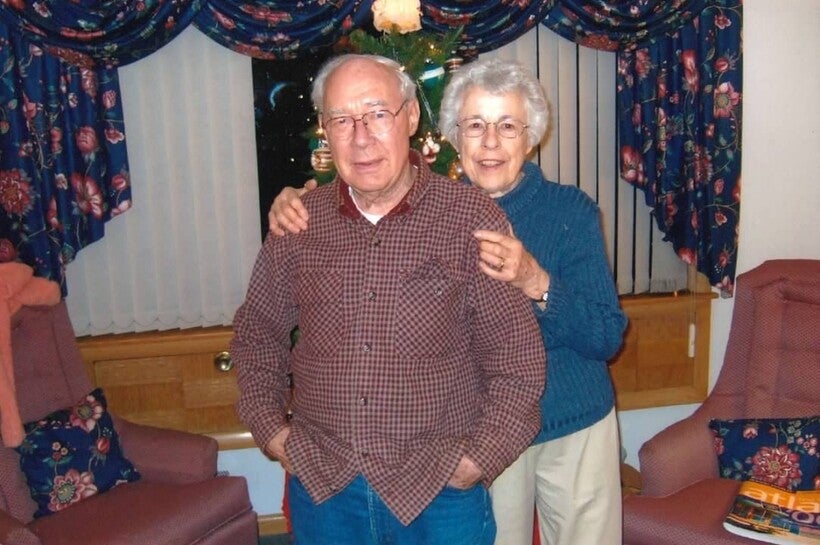 Wilford and Mary Kepler at their home in Wauwautosa in 2016. Photo courtesy of Mike Kepler.

All three continued to feel symptoms of the virus and in mid-April Wilford fell, injuring his head. Both Wilford and Mary were admitted to a local hospital where Wilford tested positive for the virus. His conditioned worsened and eventually hospital staff moved Wilford and Mary so that they could be in the same room.

"After a day or two in the ICU unit, they moved him to the same ward that my mother was in," Mike said. "They moved them into the same room, and they moved their beds together ... We were very happy with that."

Wilford died due to his head injuries early in the morning of April 18. Mary died from coronavirus complications just hours later, according to the Milwaukee County medical examiner's reports.

"Well, for me the grief was ... almost overwhelming for the first two or three weeks," Mike said. "Tears were constantly in my eyes. And it's gotten better." 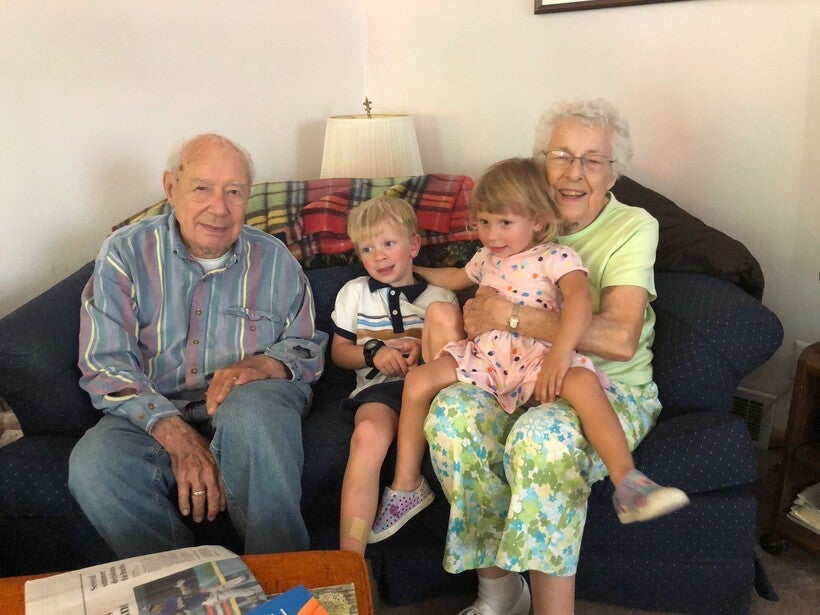 Wilford and Mary Kepler with their great grandson, Dax, and great granddaughter, June in 2018. Photo courtesy of Mike Kepler.

Wilford's death is not counted officially as part of the state's coronavirus death toll, but to Mike it feels like both of his parents were lost to virus.

He said his parents had a strong work ethic, and dedicated themselves to their family. Mike said that family, which has now grown to include grandchildren and great-grandchildren, will be their biggest legacy.