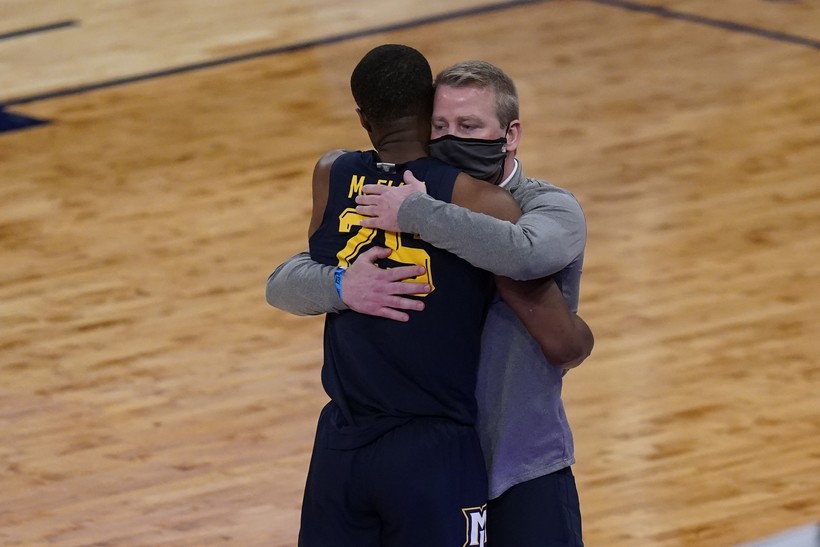 Marquette head coach Steve Wojciechowski, right, hugs Koby McEwen after McEwen fouled out of the game during the second half of an NCAA college basketball game against Georgetown in the Big East conference tournament Wednesday, March 10, 2021, in New York. Frank Franklin II/AP Photo

Wojciechowski led the Golden Eagles for seven seasons. During that period, the team's record was 128-95. Marquette made the Big Dance twice during Wojciechowski’s tenure. This year’s NCAA tournament begins Friday, and Marquette didn't qualify.

Bill Scholl, Marquette's director of athletics, had several conversations with Wojciechowski about the program's future after the Golden Eagles were bounced from the Big East tournament in the first round by Georgetown, the eventual champions, he said.

"We talked a lot about what the expectations are and what we need to do to get better and to continue on the right trajectory, and there were just some areas, at the end of the day, where I think we felt differently about what was the right way to go on some things," Scholl said.

Marquette's record this year was 13-14. The Golden Eagles finished near the bottom of the Big East.

The university will begin the search for its next coach immediately, according to a news release from the athletic department. Scholl said he's looking for a candidate who's a proven recruiter with a commitment to academics. Sitting head coaches likely have a leg up, but he hasn't ruled out hiring an assistant, Scholl said.

Historically, expectations have been high for the Golden Eagles, who've reached 33 NCAA tournaments and three Final Fours. Marquette won the national championship in 1977.

Scholl said he expects the team to consistently finish near the top of the conference and to make regular NCAA tournament appearances.

Wojciechowski was hired in 2014. According to the Milwaukee Journal Sentinel, he signed a contract extension in 2019 that would have kept him at Marquette through the 2023-24 season.

Marquette is a No. 10 seed in the women’s NCAA tournament, opening play Sunday against Virginia Tech. The Golden Eagles reached the finals of the Big East tournament, falling to the powerhouse UConn Huskies.

The men’s team from the University of Wisconsin-Madison kicks off its March Madness Friday, facing North Carolina Friday. Meanwhile, the Badgers parted ways with their women’s head coach this month.